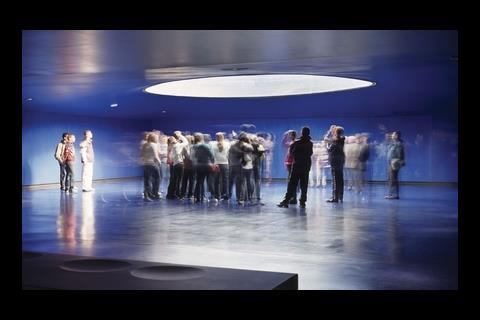 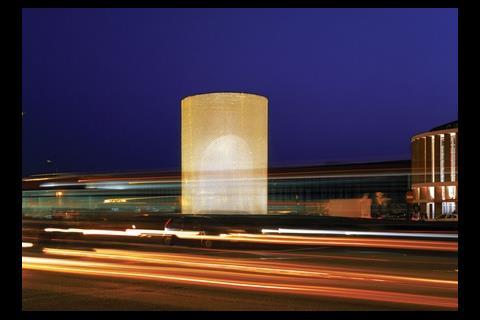 Lit up at night by luminaires 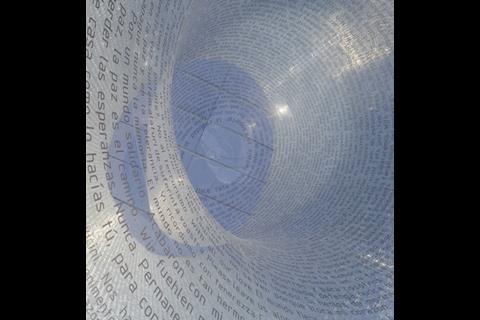 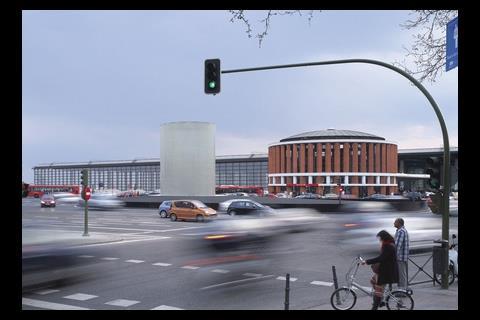 Inside the enigmatic glass cylinder at Madrid’s Atocha station

World War. It was inaugurated by King Juan Carlos of Spain on 11 March, three years to the day that a series of bomb explosions killed 192 train passengers and wounded 1,800.

The design, which won a competition that attracted 289 entries, is the work of a local practice, Estudio FAM.

From the outside, the monument appears to be a glass cylinder, 11m high and with no doors or windows. The cylinder is colourless and translucent

as it was constructed from 15,000 clear glass bricks bonded together by transparent acrylic glue. The bricks were cast with one end concave and the other convex so they could interlock with uniformly narrow joints.

The monument is approached through a wide underground chamber above the railway platforms. At the centre of the cobalt-blue chamber, the ceiling opens up into a colourless glass shaft luminous with daylight.

From here, the shaft takes on a soft, curvaceous look, like the inside of a balloon. It is a colourless ETFE membrane that is inflated by air pressure.

The message of the monument is written on the curved lining: a collection of comments from survivors and rescuers has been screen-printed on the ETFE lining, where it is back-lit by daylight passing through the glass cylinder.

At night, luminaires in the cavity produce the same effect while turning the cylinder into a potent civic beacon.

As Estudio FAM says: “With the transparency and permeability, the feeling is that all the messages of the Madrid citizens are flowing above your head.”