HOK’s Salvador Dalí Museum in Florida marries the classical with the fantastical, a paradox the artist himself would have cherished 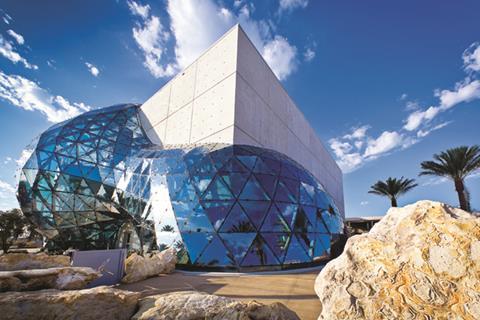 Every now and then a building comes along that seems to owe more to fantasy and imagination than reality. HOK’s recently completed Salvador Dalí Museum in St Petersburg, Florida, is one of those buildings. Directly inspired by the surrealism of its namesake, the building teases the subconscious by crafting an operatic, sensuous architectural dreamscape comprised organic forms and indeterminate spaces.

And yet, for all its melodramatic intrigue, this is an eminently practical building. Enjoying a prime location on the St Petersburg waterfront, the museum was designed to withstand the high winds and violent storm surges that frequently batter the Florida coastline. Hank Hine, the museum’s director, perfectly summarises the building’s essentially dual aspirations by describing it as a combination of the “classical and fantastical”. It is a compelling paradox of which Dalí himself would undoubtedly have been proud.

The 6,317m2 gallery houses watercolours, sketches and sculpture from the museum’s 2,140-piece collection, thought to be the most comprehensive anthology of Dalí’s work in the world. The three-storey, 23m-tall building replaces a one-storey warehouse block built in 1982. Construction of the current museum began in December 2008. Impressively, it came in at almost half a million less than its £20m budget.

Its concept ingeniously combines a robust, practical solution to its inclement climate with the mischievously surrealist spirit of Dalí’s work. For these purposes the building is conceived as two visually distinct components, the “Treasure Box” and the “Enigma”.

The Treasure Box is an 18m-high concrete block that protects the precious, priceless artworks inside. Sternly cast in smooth, unfinished concrete with blank facades unrelieved by window openings, it deliberately appears fortress-like. Its formidable in-situ cast solid concrete walls and roof are designed to withstand the 165mph winds of a Category 5 hurricane. Storm doors also shield the vaults and galleries within, and the artworks are only located on the top floor, well above the 9m flood plane.

The orthogonal composure of the Treasure Box is aggressively disrupted by a protruding, amorphous glass mass that bulges out of and around the concrete walls like a liquefied, translucent tumour. This is the Enigma, the visual and conceptual antithesis of the Treasure Box and the architectural tribute to Dalí’s surrealist art. As Yann Weymouth, lead architect and director of design for HOK’s Florida practice, explains: “We exposed the unfinished faces of the concrete to reduce maintenance and to allow it to be a tough, natural foil to the more refined precision of the glass Enigma. This contrast between the rational world of the conscious and the more intuitive, surprising natural world is a constant theme in Dalí’s work.”

Entirely comprising triangular glass panels and steel structural nodes, the Enigma also emphatically recalls the pioneering geodesic geometry of Buckminster Fuller, the legendary architectural theorist who was a great friend and admirer of Dalí. Weymouth also identifies Fuller as one of his heroes. Accordingly, the Dalí Museum sees the first use of this type of geodesic structure within the USA.

The Enigma is also indebted to the latest advancements in computer technology. HOK employed building information modelling to create three-dimensional models of the glazing forms before importing the models into a proprietary software programme that enabled the engineering, manufacture and eventually the installation of the glass structure. As Weymouth explains: “No glass panel, structural node or strut is precisely the same. This permitted us to create a family of shapes that, while structurally robust, more closely resembles the flow of liquids in nature.”

The spirit of Dalí is present too in the museum’s most striking internal feature, a sweeping spiral staircase that connects the ground floor to the exhibition galleries on the second. Cast in the same raw, unfinished concrete that defines the Treasure Box, the staircase glides effortlessly up through the central atrium with an organic elegance and dexterity that defies the static rigidity commonly associated with its material.

The staircase perfectly encapsulates the twin ideals of the Dalí Museum, structural functionalism and visionary escapism. Its concrete form effectively recalls the role of the Treasure Box, solidity and protection. And yet its helical structure pays homage to Dalí’s fascination with the spiral forms found throughout nature and the double-helix of DNA.

When looking up through the staircase, it twists upwards to the top floor at which point it tapers to a width of only a few millimetres before “disappearing” into the glazed roof-light above and ultimately, the sky and infinity beyond. The manipulation of form and perspective to create an optical illusion that stimulates the subconscious and evokes the ethereal is, like the rest of the museum, a stirring architectural homage to Dalí.