In 2012 London took on the huge logistical challenge of hosting the Olympics, but its ambitions did not stop there. Thomas Lane highlights the feats of engineering that are changing the face of the capital and that are this year’s winners of the ICE Awards

Last year the eyes of the world watched London cope admirably with the Olympics. The cynics predicted the venues wouldn’t be ready, the roads would seize up and public transport would grind to a halt. But good organisation and clever engineering ensured the Olympics ran without a hitch. These same skills are applied daily to extending and improving London’s buildings and infrastructure. Some of these schemes such as Crossrail are more ambitious in scale than the Olympics yet are being constructed with minimal disruption to Londoners.

Occasionally there is disruption when things go wrong as happened when Hammersmith flyover was closed last year due to structural corrosion. But once again those engineering skills ensured it was repaired and opened swiftly to get London moving again. These achievements and other contributions to the quality of life of Londoners are celebrated in the ICE London Engineering Awards 2013.

Organised by the Institution of Civil Engineers, there were 45 entries, which were whittled down to a shortlist of 15 for this year’s London Engineering Awards. A panel of expert judges spent two days travelling around London to assess each entry. The awards were held last night at a ceremony at the home of the Institution of Civil Engineers (ICE, One Great George Street in Westminster. Here is a round-up of the winners. 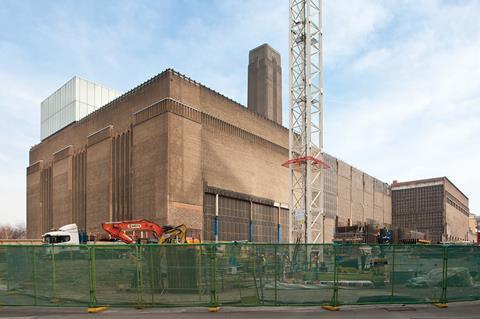 Most people think of Bankside as an art gallery but its original function as a power station means it is still a key junction for much of the City and Southwark’s power infrastructure. The substation which is part of Bankside is one of London’s largest and has been refurbished with new, more compact transformers to ensure it has the capacity to supply future projects.

The building has been upgraded by adding three floors and by strengthening existing slabs to take the additional loads. All this work had to be carefully phased to ensure the power supply wasn’t interrupted.

Unusually, the new transformers are liquid rather than air cooled due to space constraints. This had a major benefit as the waste heat has been reclaimed to preheat the hot water supply in the Tate Modern. Enough heat will be produced for the entire extension and will save £5m over the building’s life.

The judges said: “It has been completely rebuilt in a heritage building without interrupting the power supply and increases resilience for today and capacity for tomorrow yet is totally invisible to the public.” 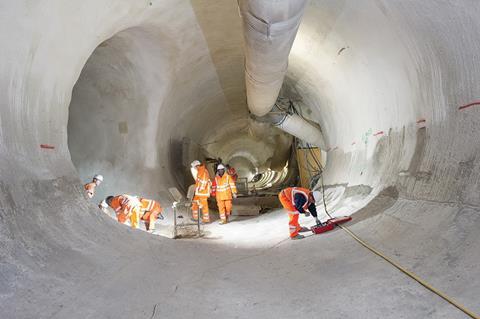 Deep below the streets of London workers are busily upgrading Tottenham Court Road underground station so it will connect seamlessly with Crossrail and provide step-free access from street to station platform level. This includes building a new ticket hall and escalator linking existing Northern and Central line platforms via new connecting tunnel and underground concourses. The team had to be very careful not to affect the existing underground infrastructure which meant the work has been done using mini excavators and good old-fashioned shovels and buckets. Part of the work included building two tunnels which bridge the existing underground platform tunnels. This involved cutting into the old tunnels without disrupting underground services and ensuring a Victorian brick sewer just 2m above the overbridges wasn’t affected. A support raft was constructed to protect the sewer and sprayed concrete featuring fibre reinforcement, a first for this type of application, was used for the tunnel lining which speeded up construction.

The judges said: “There is a lot of construction innovation on this project and the way the way the team have tackled health and safety is notable.” 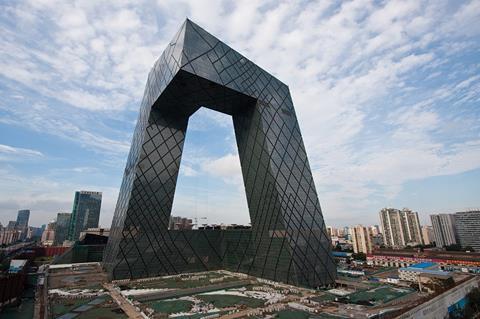 There is no other building like CCTV on the planet - two leaning towers 234m and 194m high are linked by a cranked, 15-storey high overhang with a 10-storey high podium. It is the second biggest office building in the world and houses all the disciplines needed to make a TV programme from concept to finished production - the nature of this continuous, interconnected process is reflected in the buildings form.

Realising this was a major challenge which was tackled by Arup’s London office. The only way to counteract the enormous gravitational forces on the leaning elements and any seismic activity was by using an external steel diagrid acting as a continuous tube system. This was engineered to cope with the differing stresses and strains placed on it.

Convincing the Chinese authorities that the building would stand up was one of the biggest challenges of this job - it took six months. After the green light was given it took another two years of extensive computer modelling to prove the design. As no existing codes of practice existed, the design had to be approved by a panel of 12 seismic and structural experts. A 1:40 model of building was constructed to verify the building’s dynamic behaviour under wind and seismic loading.

Constructing the building was equally challenging. The basement raft slab is 7m deep and holds the record for the biggest concrete pour at 39,000m3. Welding the two towers together had to be done before sunrise as the sun’s heat caused the steelwork to expand differentially making an accurate join impossible. In the early days the Chinese referred to the project as the “dangerous building” but now they call it by the more affectionate term “the big shorts”. The judges were impressed: “This project demonstrates if you want to transform an iconic dream into an engineering reality, you need to come to London.” 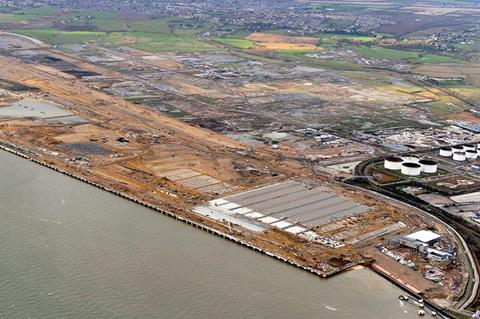 Although London Gateway is outside the city it will have a major impact on its economy when it opens next year. £1.5bn is being invested into what will be the UK’s first major 21st century deep sea container port and Europe’s largest logistics park creating 36,000 jobs. What marks this port out is the 940,000m2 warehousing and logistics centre which DP World, the company behind the development, says will transform shipping and distribution. When goods arrive by ship in the UK, containers are transported to the Midlands ready for nationwide distribution. This creates unnecessary journeys as many of these goods are ultimately destined for the South-east and are driven back again. The new logistics centre means those goods can be distributed from London Gateway locally. DP World, claims this will save 65 million HGV miles annually, saving time, money and carbon emissions.

Creating the facility is a massive construction and logistical exercise, a new channel is being dredged from the port out to the North Sea, 1.5km of new quayline is being created and 90,000m2 of distribution sheds are being built. The judges recognised the role engineers have played in designing and realising London Gateway, saying: “Engineering has underpinned this development which will have a major impact upon the economy and bring sustainability benefits.” 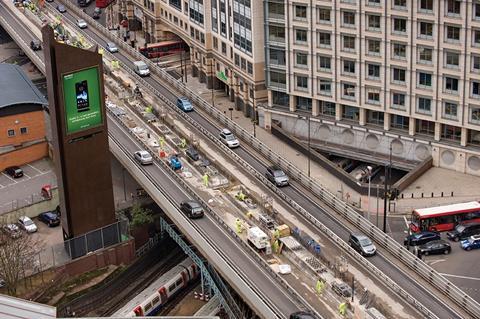 When the Hammersmith Flyover had to be closed in December 2011 due to serious structural corrosion it looked as if West London was going to be gridlocked for years. The Olympics were less than a year away so a quick solution was needed to keep traffic moving during this critical period and take pressure off commuters and residents. Road salt-induced corrosion had eaten away post tensioning cables to the point the flyover was in danger of collapse. Amey worked on an open book, collaborative basis with Transport for London to get a job that would normally take up to two years to finish done in 23 weeks. New bundles of cables were installed - each bundle has 19 strands with each strand made up of seven wax coated wires. Each wire can be individually replaced and tensioned making future replacement of elements a relatively simple job. The judges were impressed by the collaborative, swift response to the problem, saying: “This saved embarrassment and negative economic consequences for London at a critical time.” 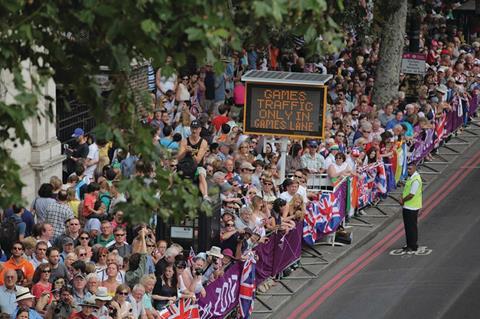 Keeping London moving during the Olympics was one of the biggest challenges facing Transport for London (TfL) and the Olympic Delivery Authority. The Olympics were the catalyst to bring forward billions of pounds worth of investment. Improvements included extending the DLR to Woolwich Arsenal and upgrading the system from two to three car trains. Capacity and accessibility of Stratford station has been upgraded and the Jubilee Line has benefitted from longer trains. The Olympics were also the catalyst for the upgrading of King’s Cross station.

The second key challenge was making sure athletes and officials could get easily to and from venues. The Olympic Road Network (ORN) was an International Olympic Committee requirement and consisted of 174km of routes of which 90km were dedicated Games lanes. Implementing, operating and decommissioning the ORN was a major logistical and engineering exercise which involved changing junctions, putting up 8,000 signs, altering road markings with 60 miles of tape and installing variable messaging signs monitored with 1,800 cameras. Companies that are usually competitors came together on an open book basis with TfL taking the financial risk. The big build involved 2,000 people who started on the Friday night before the Games and worked for three nights to implement the measures.

The ORN worked extremely well as not a single athlete or official was late for an event because of transport issues. There was a 98% Games lanes compliance rate and nobody was hit by a penalty charge notice.

The judges thought these projects had benefitted London enormously saying: “This put civil engineering at the heart of London, bringing forward key transport infrastructure improvements that will benefit London in the long term and showed how effectively engineers can manage our road system.” 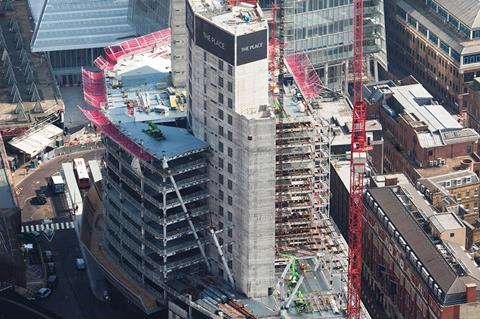 The Place
Entered by Mace

The Place features floorplates over 50% bigger than its predecessor on the same sized structural footprint. The site was boxed in by underground assets so a smart engineering solution was needed as developer Sellar wanted large floorplates to attract a corporate occupier.

The answer has been to cantilever the building over the underground assets. This called for some clever structural gymnastics. Rather than using expensive, space hungry transfer structures, raking columns take loads from the building perimeter and transfer these back to the core. Structure below the raking columns is suspended from the raking columns.
Because the cantilevered areas of the building vary, the frame is asymmetrically loaded. This called for two very stiff cores to resist these loads. These have been built with a preset lean to the west - the idea being that the weight of the building pulls these vertical once finished. Computer modelling was used to predict how the frame would move as weight was added to it.

The job was made more challenging by the tight programme and need for an extensive archaeological dig within the structural footprint. Top down construction provided the answer with the basement slab cast within two days of the last piece of steel being added to the frame.

The judges said: “Good engineering provided a significantly larger building, adding value for the developer and solving the issue of major out of balance loads during the temporary and permanent condition.”

THE SHORTLIST IN FULL