Transport infrastructure projects feature heavily among the winners of this year’s ICE London Engineering Awards. Thomas Lane reports on the ambitious engineering and sheer inventiveness of the developments that aim to make life easier for Londoners

One of the greatest engineering challenges is making big improvements to infrastructure without anyone noticing. Only a few Londoners are affected by the construction of Crossrail despite it being Europe’s largest live project as the project team have gone to great lengths to ensure minimal disruption to daily life. Everyone notices when the RMT union goes on strike, but are unaware of the army of people keeping the tube running by making improvements and repairs in the dead of night. The only time people do notice is on the rare occasion that engineering works overrun.

This year, London’s transport infrastructure projects feature strongly in the list of winners of the Institution of Civil Engineers (ICE) London Engineering Awards 2014. The winning projects were selected for the clever engineering and delivery skills needed to make these ambitious schemes happen safely, sustainably and with minimal disruption, with the ultimate goal of making a difference to Londoners’ quality of life.

Organised by the ICE in association with Topcon, there were 36 entries, which were whittled down to a shortlist of 15. A panel of expert judges spent two days travelling around London to assess each entry. The awards were held last night at a ceremony at the home of the ICE, One Great George Street in Westminster. Here is a round-up of the winners. 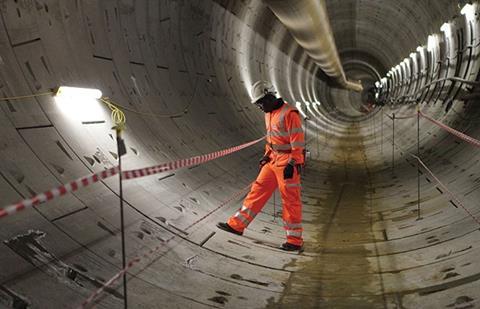 Crossrail will make the biggest difference to London’s transport infrastructure in a generation once it is completed in 2018. Making this happen is a huge challenge - the project consists of 38 stations and over 60 miles of railway, with 26 miles in new bored tunnels. These are being driven underneath London, up to 40m below the ground, which makes this one of the most challenging civil engineering projects ever undertaken in the UK.

The tunnels are driven through difficult geology and threaded through existing infrastructure - at Tottenham Court Road, 40 utilities had to be diverted in the Oxford Street area alone. The major civil engineering phase of the job is coming to an end, with 70% of the tunnels completed.

Nine new stations are being constructed, including at Bond Street. This includes building two ticket halls - one for each end of the platform. These are located close to existing infrastructure, including one 2.5m from the Jubilee line.

The western ticket hall box is almost finished while the eastern box is at relatively early stages. The latter includes the construction of a shaft which was going to be supported using steel sections. These were going to be procured from Japan with a 30-week lead time, which would have resulted in a seven-month delay to the programme.

The project team worked together to develop an alternative solution, which comprised constructing temporary concrete slabs across the shaft to support it during the top-down construction process, keeping the programme on track.

The section of Crossrail between Canary Wharf and Woolwich passes under Royal Victoria Dock through a 120-year-old tunnel last used for the North London Line, which closed in 2006. The original proposal was to fill the tunnel with foamed concrete and drive the tunnel boring machine through it. The team decided the tunnel was in sufficiently good condition to be reused, although the central section under the dock needed strengthening.

This was done by building an in-situ concrete ring inside the existing tunnel and breaking out the central section and crown to create one big tunnel out of the existing two sections.
The tunnel was too close to the bottom of the dock and needed a 700-mm slab to be built over the top of the tunnel to protect it. This was done by installing two cofferdams on either side of the tunnel and draining the dock to enable the work to be carried out. This solution reused a decent piece of historic infrastructure which is good for another 120 years.

The judges said: “All the projects were excellently executed and fully embraced Crossrail’s values, including training and career development for the future generation of civil engineers and using the best innovations that the British supply chain can deliver.” 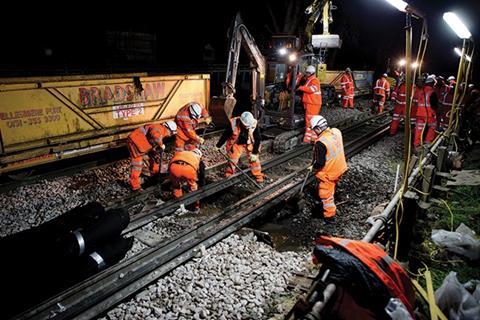 Modernising London Underground to improve the passenger experience and accommodate increasing passenger numbers without significant disruption is a massive challenge. On top of this, the 150-year-old system needs constant maintenance to keep it running smoothly. The three winners are all focussed on delivering an improved, smooth-running underground system and are worthy winners of the Greatest Contribution to London Award. The first winner, London Underground, is replacing a section of Jubilee Line tunnel lining between Baker Street and Bond Street stations.

The line was constructed in the 1970s using a pre-cast concrete lining system. A 359-ring-long section had deteriorated and needed replacing during engineering hours, a task never done before. The challenge was to find a method of replacing the lining in a two-hour window and ensuring it was safe for trains to use the tunnel the next day. To speed up the job, a special mobile workstation on a plant wagon was prototyped and developed over a two-year period using a disused section of tunnel as a guinea pig. This cuts out damaged tunnel ring segments and replaces them with cast iron sections.

Increasing passenger numbers by 21% without making stations unbearably hot in the summer was the focus of the Victoria line upgrade. This was a challenge as there is a direct relationship between the number of trains and heat generated. Modelling showed increasing the number of trains from 27 to 33 per hour would raise tunnel temperatures by 7°C and energy use by 72%. A holistic approach to energy optimisation was adopted to reduce temperatures. Braking produces 50% of all heat generated on the underground. Regenerative braking was employed along with reconfiguration of the traction energy supply to make more efficient use of this regenerated energy.

Trains accelerate more quickly and coast into stations to reduce braking without affecting overall journey times. This cut the predicted 72% increase in energy use by two-thirds. The remaining heat was dissipated by installing more powerful fans in 13 ventilation shafts and introducing mechanical cooling in Green Park and Oxford Street stations. The result is lower station temperatures with a better service.

Replacing worn-out track, platforms and drainage is a potentially disruptive job. The Track Partnership is responsible for all non-deep tube track replacement across London, which includes the above-ground sections of deep tube lines. It carried out 112 projects last year without any engineering overruns.

Where possible, it does the work in one hit rather than in engineering hours as this is more efficient. It recently carried out extensive work at Hainault during a 12-day closure, a job that would have taken 19 days if done at weekends and cost an additional £5m. It is constantly innovating to reduce the time and cost of the work - the price of track replacement is 25% less per metre than three years ago.

The judges said: “These projects are a true demonstration of teamwork, dedication and continuous improvement, and show a massive leap in engineering ingenuity. Whether by making the Victoria line cooler, tracks safer or replacing rotten tunnel linings, the commitment to safety, cost and making London’s tube a more reliable and better place is inspiring.” 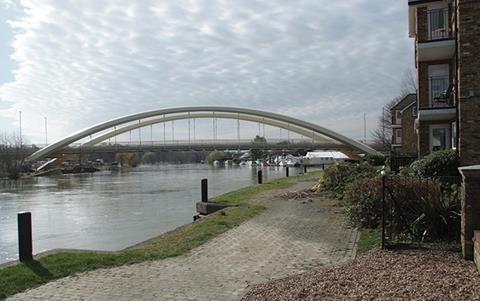 Leafy Walton-on-Thames has suffered from ugly temporary bridges since the Second World War until July last year, when a striking new crossing was opened. It has two hexagonal section steel thrust arches supporting the road deck from tension rods.

The first bridge in the UK to be designed and built to new European Standards, the project was hit by a 20% budget cut in the 2010 Government Spending Review. This challenged the team of Surrey County Council, Atkins and Costain to work collaboratively to deliver the scheme originally approved, a job it has done on time and on budget without any reportable accidents or construction material going to landfill.

The new bridge has segregated cycle and pedestrian facilities, and was painted an ivory colour to ensure nearby swans could distinguish the bridge from the sky. Improving local amenities was an important part of this project - a cafe and toilet facilities have been built, and a wetland created to mitigate flooding.

Accessibility along the Thames path for cyclists and pedestrians has been improved too. The project was delivered with close consultation with the local community from the start. This meant few complaints were received during construction and locals are delighted with the end result.

The judges were impressed by this project, saying: “This is a great example of engineering giving real value to the community. The bridge is a vast improvement on its predecessor, with the added benefit of wider enhancement of other local amenities.” 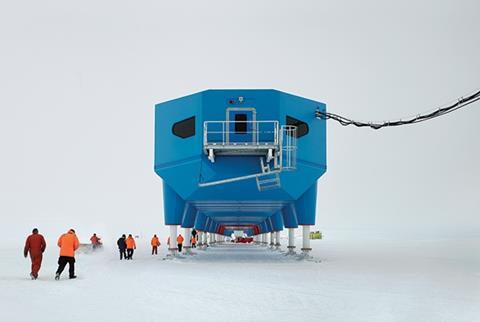 What could be more technically challenging than designing and building a relocatable research station in one of the most remote and inhospitable areas of the world? This is what AECOM, architect Hugh Broughton and contractor Galliford Try have pulled off with the Halley VI research station for the British Antarctic Survey.

Sitting on a 150m-thick ice shelf in the Antarctic, the station can lift itself up on hydraulic legs to ensure it can cope with snow levels that rise 1.5m a year. It can also be moved to a new site in the event of the ice breaking up, the fate that befell the previous research station, Halley V.

Built from GRP as this was the most stable material in the sub-56°C temperatures, the modules were tested and built in South Africa, then taken by ship and skis across the ice to the construction site. Work could only take place in the two-month Antarctic summer. Safety in the hazardous conditions was paramount as the nearest hospital was more than 1,000 miles away.

The project has been designed to have minimal environmental impact - it is more energy-efficient than earlier stations with power supplied by CHP and water use minimised to 20 litres per person per day. When the time comes to deconstruct the project nothing will be left behind to spoil this pristine environment.

The judges said: “As a centre of creativity and innovation, London is hard to beat. Imagined, conceived, designed and turned into reality by a London-based team, Halley VI is the epitome of this spirit.”

The shortlist in full