Beneath Londoners’ feet, on their roads and in their stations, the city is undergoing arguably its biggest transformation since the Victorian age. The ICE awards, held last week, celebrated the cream of this current wave of infrastructure projects. Thomas Lane rounds up the winners

While most of the construction industry is on its knees, 2012 could go down in history as the finest hour for civil engineering in London. Vast sums are being lavished on the capital’s infrastructure: Crossrail is steaming ahead, Thameslink is well advanced and swaths of Victorian infrastructure as diverse as the Blackwall tunnel and King’s Cross station are being given a new lease of life. This made judging the ICE London Civil Engineering Awards 2012 an even more difficult task than usual.

Organised by the Institution of Civil Engineers, there were more than 40 entries, which were whittled down to a shortlist of 13. A panel of expert judges spent two days travelling around London to assess each entry. The awards were held last Monday at a ceremony at the home of the ICE, One Great George Street in Westminster. Here is
a round-up of the winners … 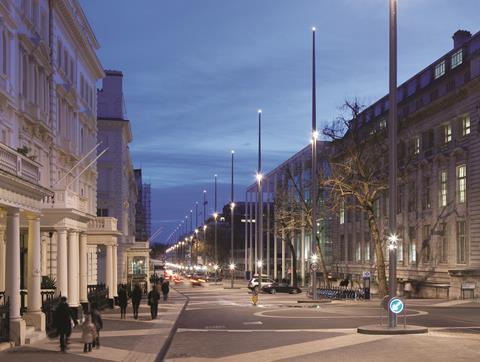 Exhibition Road is home to some of London’s most famous museums, and in the holidays it is jammed with visitors from all over the world. Their first experience of Exhibition Road is vying for space on the narrow pavements, street clutter and lots of traffic. This bold scheme sweeps all this away and replaces it with a shared space without pavements or pedestrian crossings. The idea is that cars drive more slowly and carefully and pedestrians are more aware of their surroundings when crossing the road.

Designed by architect Dixon Jones, there is a striking diagonal pattern expressed in light granite against a dark granite background, which breaks up the linear nature of the street. Car parking areas are demarcated by discreet studs, there are attractive timber and stainless steel benches, and a line of 20m-high lighting masts runs down the middle of the 800m-long scheme.

It creates a much more attractive street scene and reclaims space for pedestrians while still allowing traffic through, benefiting everyone. The judges said: “We really liked Exhibition Road because, for the first time in London, it makes an attempt to rebalance people and vehicles. We would love to see the messages from that extended to the wider UK.”

(in association with Speedy) 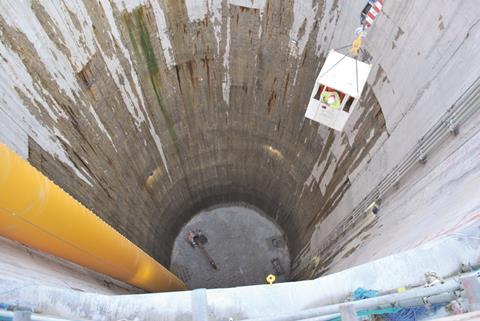 Every time it pours with rain, millions of gallons of water pour into London’s combined sewage system - which then overflow. Some 39 million tonnes of sewage mixed with rainwater get dumped into the Thames each year. The Lee tunnel is the first of two tunnels that will put an end to this problem. A four-mile tunnel will link London’s largest combined sewage overflow at Abbey Mills with Beckton sewage treatment works. This will prevent 16 million tonnes of rainwater mixed with sewage from overflowing into the River Lee and ending up in the Thames. 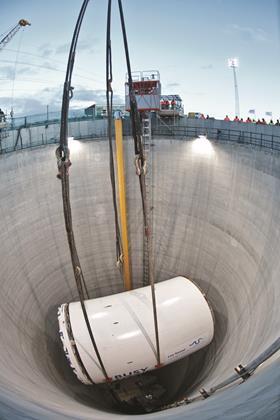 This is civil engineering on a grand scale. The 7m-diameter tunnel will be the deepest in London and involves the construction of four enormous shafts. A shaft at the Beckton end enables the heaviest tunnel boring machine ever used in the UK to be dropped in and another shaft at Abbey Mills is used to take it out once the tunnel has been bored. A pumping shaft is located near Beckton with an adjacent connection shaft to the tunnel. The tunnel and shafts also act as a giant storage facility to hold 382,000m3 of sewage, allowing this to be released in a controlled manner to the Beckton treatment works.

How do you sink the deepest shafts ever built in London? These are up to 98m deep and 41m in diameter and have to resist enormous forces from water and ground pressure. The team decided to use diaphragm walls for the shafts - a retaining wall technique that also holds back water. But diaphragm walls are normally associated with linear walls less than 50m deep, making this project a first.

A hydrofraise, a frame with counter-rotating cutting wheels was used to cut rectangular holes 98m deep, 1.8m thick and 7.2m wide. Reinforcement is dropped into the hole, followed by a 1,400m3 continual pour of concrete to form one segment of the shaft. The process was completed all the way round the hole, then the earth remaining in the centre was excavated to form a watertight shaft.

The technique has been a great success: the tunnel boring machine is being prepared to start its journey from Beckton to Abbey Mills, with the project due for completion in 2015. The judges said: “Sewers are unseen and taken for granted. Not only was the ambition of this project impressive, but this relies on innovation, which in turn relies on a real understanding of engineering skills and judgment.” 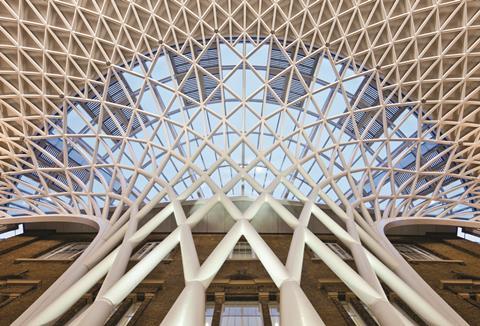 Neglected for decades and disfigured by a nasty, cheap crinkly tin concourse slapped onto the front facade, King’s Cross station was hardly going to be a good advert for UK infrastructure as Olympic visitors passed through on their way to Stratford. It was not exactly an edifying experience for the thousands of commuters using it each day either.

The station is being reborn with a new concourse to the west, which is where people enter and can loiter under a much more impressive half-dome diagrid lattice structure supported by 16 tree columns. There are shops and pubs too, and getting into the station will be far more pleasant and more logical. Best of all, it enables the crinkly tin carbuncle to be scrapped and the facade to be revealed once again.

Contractor Vinci has had to keep the station fully operational during the complex job of building the western concourse. The temporary hoardings had to be moved more than 30 times so work could progress and people could catch their trains. The western concourse is nearly finished and opens to the public in two weeks. 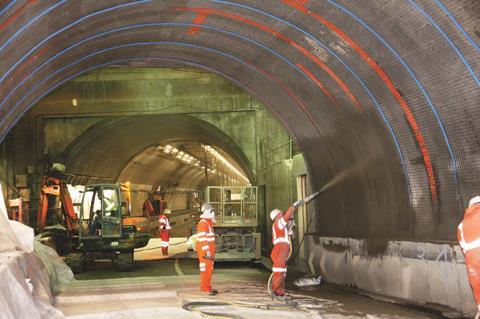 Completed in 1897 for horse and carts, the northbound Blackwall Tunnel now has to cope with 50,000 motorised vehicles a day. After an inspection prompted by the disastrous fires in the Mont Blanc and St Gotthard tunnels in the Alps in 1999 and 2001, the northbound tunnel was pronounced one of the most dangerous in Europe. This spurred a comprehensive refurbishment including new refuges for people whose vehicles break down in the tunnel, lighting, ventilation systems, CCTV and communication systems.
As with King’s Cross station, the work had to be done with minimum disruption to users, so working hours were limited to between 9pm and 5am, and the 10 planned weekend closures were reduced to just six. Careful planning and collaborative working enabled the job to go so smoothly it was completed on budget and 13 months ahead of schedule.
The judges were impressed by the way the teams on both projects worked hard to do a difficult job, improving aged infrastructure without inconveniencing Londoners. They said: “Both projects took traffic arteries and brought these up to modern standards. The practical and organisational and co-operative arrangements were exemplary and enabled the facilities to stay operational, which is a masterful achievement.” 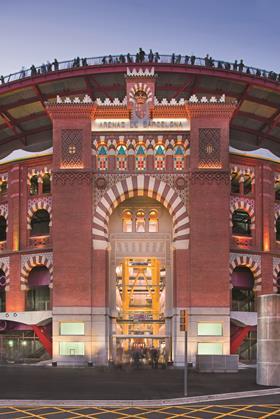 Las Arenas is a perfect example of how to reinvent a traditional leisure activity, bullfighting, as a modern equivalent, shopping. The old facade has been retained, but the guts were stripped out and replaced by a Richard Rogers-designed state-of-the-art shopping and leisure complex, complete with parking for 4,000 cars.

Unfortunately, before the switchover, Las Arenas had been left abandoned for over 30 years. The 100-year-old facade was cracked, bits were falling off the top. Once the central sections were demolished, it was left in an even more delicate state. It was also built on a 5m-high mound that had to be removed so people could pass through the centre at street level. Predictably the foundations were only a few inches deep.

What is amazing is the way in which the mound of earth was removed, leaving the facade elevated in the air while the centre of the scheme was excavated to create five storeys of basement parking. Temporary works kept the whole thing upright while concrete beams were clamped on either side of the aged walls. Sections of earth could then be scooped out from under the beams and temporary works inserted prior to permanent columns being installed.

With the facade taken care of, the rest of the work could proceed, including an independently supported roof structure. The judges said: “Through the will to adapt an obsolete yet iconic structure in one of Europe’s most important cities, the adoption of ingenious temporary works and construction sequences, it has been turned into a multipurpose commercial centre and a huge social amenity.” 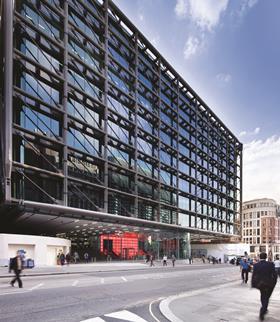 It has taken 20 years to find a viable way of redeveloping the space over Cannon Street station. The combination of the railway station, the District line running under the north side of the site, and a scheduled ancient monument to the southern side posed serious structural constraints. Views of St Paul’s cathedral limited the building height and meant the only way this project was going to work was to shoehorn eight storeys of office into the space between the station and the viewing corridor.

Architect and structural engineer Foggo Associates realised that a bold structural solution was required. Two lines of columns in the middle of the building support the whole job. The north end cantilevers 21m from the row of columns and is balanced by the equivalent to the south. Big X-shaped braces add stiffness and are expressed on either side of the building. The cantilevers were constructed by using strand jacks and cables attached to the central section of the building to hold them aloft. The cantilevered structure was built up then the loads were transferred from the strand jacks onto the permanent structure.

The end result is a glass box elegant in its simplicity, with huge, uncluttered floorplates. The judges said: “It has resolved the problems of this site tremendously elegantly by using a whole suite of engineering tricks and allowing people to carry on their business oblivious to 2.5 million ft2 of offices being built over their heads.”

The shortlist in full