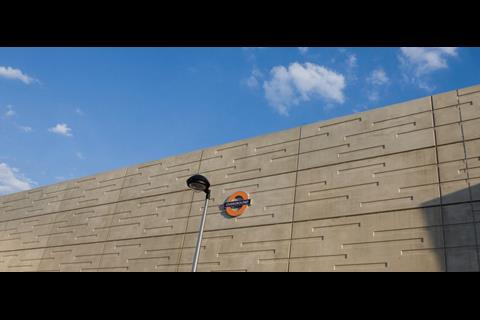 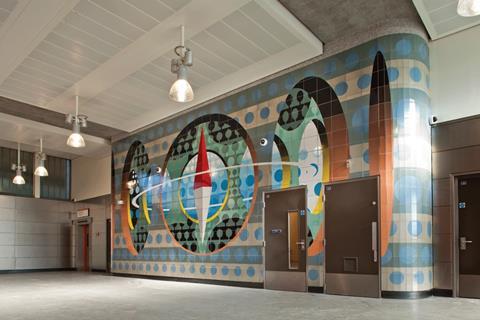 Public artwork at Haggerston Station. It is inspired by Edmond Halley, comet expert and local boy made good 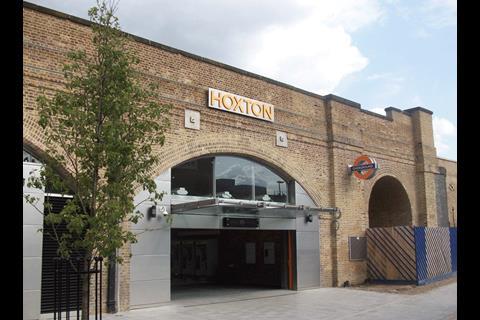 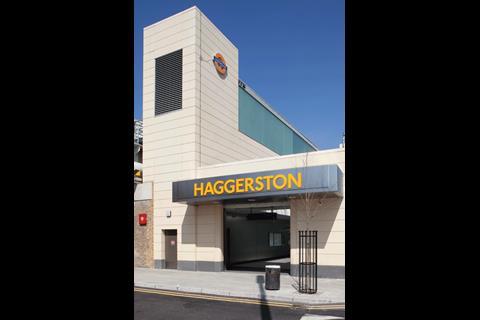 Last weekend, phase one of the £1bn East London Line extension, from west Croydon in the south to Dalston in the north, opened for full service.

The line has been incorporated into the London overground network and, when complete in 2012, the network will form the capital’s first orbital railway. Most of the route uses existing lines and stations, but the portion that stretches between Dalston Junction and Shoreditch High Street restores disused railway tracks and cuttings and incorporates four new stations.

The last publicly funded expansion to London’s rail infrastructure on this scale was the Jubilee Line Extension 10 years ago. Although this opened almost two years late and was massively over budget, the architecture of its stations was widely admired.

Phase one of this extension has come in on time and on budget. Furthermore, Transport for London maintains that the stations have been designed using quality materials and careful detailing to ensure they enhance the local environment. So how do they measure up?

The largest and most prominent station on the line is encased in a concrete enclosure that will eventually be subsumed into a surrounding commercial development.

This requirement imposed certain constraints on its construction and design. Like Dalston Junction, which was also designed to be incorporated into a future commercial development, Shoreditch High Street was designed to meet the smoke, ventilation and fire separation requirements that would normally be applied to an underground station. This will protect the railway environment during construction and allow the station to remain fully operational during this period.

In its current form, therefore, the station has an austere, totalitarian impact on its surrounding streets and townscape. Strangely, its entrance is also discreetly situated away from the busy high street on a side road at the site’s eastern end. Arup’s adjacent 35m bow-string bridge erected over the high street in 2008 is one of several crossings that have been put up for the new line.

The building of this station was preceded by a long struggle to save the Bishopsgate Goods Yard, which had stood on the site since 1840. Prior to its demolition in 2004, campaigners produced an alternative scheme that retained the older structure and placed the station above it. All that remains of the goods yard now are fragments of the Braithwaite Viaduct - one of the world’s oldest railway structures - opposite the new station entrance.

Hoxton station is situated on a quiet, pedestrianised side street, which presented good opportunities to improve the public realm with street lighting, gravel surfaces and tree planting. The entrance occupies one of several existing brick railway arches along the street’s eastern side, above which the platforms have been built. Stainless steel towers enclosing lifts and staircases provide the link between the two levels.

Stainless steel - a signature material on all four stations - has also been used partially to infill some of the arches, particularly the entrance, where a glass canopy has been added. Throughout, interventions are subtly and sensitively integrated into the existing urban fabric.

Weston Williamson acted as lead architect for the extension, and was responsible for forging a unified visual identity for it. This included the lighting booms used in all the stations and the platform design at Hoxton and Haggerston.

Haggerston station is a broad, rectangular block with service riser towers at or near each corner. The building is a sandstone-coloured precast concrete structure that incorporates a stainless steel entrance canopy beside the south-west tower. Its towers, horizontal rustication and rectilinear massing recall Charles Holden’s iconic Piccadilly line stations of the thirties.

The ticket hall has a polychrome ceramic mosaic public artwork inspired by astronomer Edmond Halley, who was born in the area.

Of the four stations, Dalston Junction is the only one that has platforms below street level, as the railway line at this point reuses an old subsurface cutting. Like Shoreditch High Street, this station has been designed to be incorporated into a future development. A podium slab has been built above the platforms to support up to 17 storeys and to protect the station during construction.

All these conditions mean that Dalston Junction makes the least impact of the four stations on its streetscape. Its north entrance, located on busy Dalston Lane, has the same narrow, single-storey infill frontage clad in stainless steel as the other three stations. Its southern entrance, located on an adjacent side street, maintains a similar appearance. Both entrances are located in about the same positions as those of the former station on this site, which was closed in 1986.

The station may be quiet, but it is going to cause a wave of local redevelopment. Some of this is already evident. About 500 new homes in 14 apartment blocks are planned above and around the station, the first phase of which has been completed next to the north entrance.