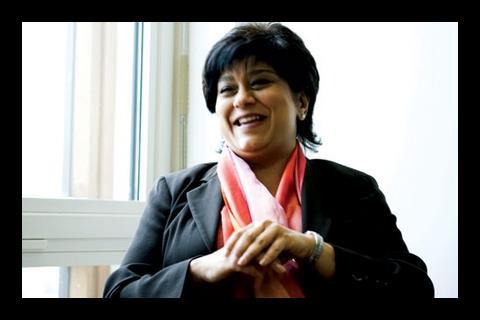 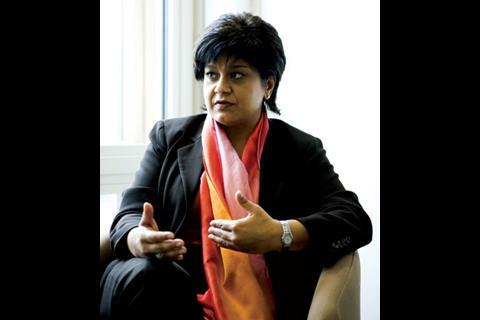 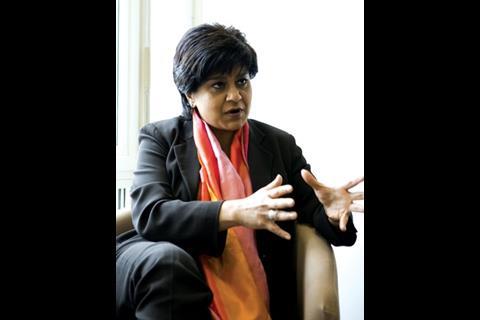 Three months after becoming construction minister, Baroness Vadera has already been accused of not making much of an impression. In her first interview since taking the job, the former ‘axe-wielder from the Treasury’ tells Emily Wright how she plans to be a very forceful presence in the industry indeed. Portraits by David Vintiner

‘I saw the photograph of Tony [Blair] in Building when he was interviewed,” says Baroness Vadera with half a smile. “It was very close-up, wasn’t it? I am a bit worried about mine. You will pick a nice one, won’t you? Ooh, I like your shoes!”

You’d be forgiven for thinking the new construction minister brings an air of femininity to the role. She is softly spoken, polite and has expertly accessorised her black suit with a fabulous scarf. But don’t let that fool you. This former investment banker is well known for her direct approach and ferocious manner.

She has already got some of the construction industry greats well and truly under the thumb. “She’s quite forceful,” says one chief executive. “A few of us are pretty scared of her, actually.” Another senior industry figure adds: “She reminds me of a female Keith Clarke [the Atkins chief executive]. That’s quite terrifying.”

Though she clearly knows how to put the fear of God into construction’s key figures, the industry’s reaction to Vadera since she took over as construction minister in January has been mixed. There have been mutterings that she has not met enough industry figures and, in short, that she’s been a little on the quiet side, particularly as her housing counterpart Caroline Flint as barely been out of the headlines since her appointment.

So, in a rare gap in her Monday morning schedule, the seventh construction minister in as many years takes some time to give the industry her explanation: “Quiet? I have never been accused of being that before! I have been very busy over the past three months putting things in place ready for implementation – I think I would argue that I have been busy, not quiet.”

When asked about the issue of the moment for construction, the Office of Fair Trading’s bid-rigging inquiry, a glimpse of Vadera the feared politician is revealed, albeit disguised by a smile: “I am sure that you know already that there is absolutely no way I can comment on that at this stage.” Understood.

Born in Uganda, Shriti Vadera’s education was split between Africa and India before she arrived in the UK when she was 15. After taking politics, philosophy and economics at Oxford, she went to work for investment bank SG Warburg, where she became executive director of corporate finance. From there she went to the Treasury in 1999 where she became one of Gordon Brown’s inner circle. She was appointed junior international development minister by Brown when he became prime minister last June and was made a life peer the following month.

It’s an impressive CV, if one that hasn’t had much added to it since January. She remains unfazed by the criticism, insisting she has been laying foundations: “I know I am under pressure to start to deliver. But the most important thing is to have the mechanisms in place to do that well and get to know the industry.” She goes on to say she has met key contractors, including the aforementioned Clarke, Ray O’Rourke, and James Wates, as well as representatives from the Construction Confederation and the Construction Products Association (CPA).

She adds that, since January, she has been focusing on a sustainable construction strategy, which she will launch on 11 June and aims to establish a single plan of action across industry and government – a joint venture that she describes as “unique”.

This industry is world class in its own way, but it has a problematic reputation.

She continues: “We are also working on making sure the government improves as a client by signing up to the 2012 Construction Commitments [also by June].” She hopes that this broadening of the much-publicised Olympic targets will ensure that the government procures more effectively and sets an example of how a successful client–contractor relationship can work.

“I have also made steps to address planning regulations and we are in talks with the Health and Safety Executive – we are very present in that sector,” she adds.

But perhaps the single most useful thing about having Vadera as construction’s mouthpiece in parliament is her connections – particularly that all-important chap in Number 10. Michael Ankers, chief executive of the CPA, has high hopes for construction policy with Vadera at the helm: “She’s got that connection to the prime minister. She’s in a fantastic position to support the industry. If we give her the ammunition we’re hoping she will fire the bullets.”

Another of Vadera’s supporters is a former construction minister himself, Nick Raynsford: “Shriti is a very, very bright woman, with a shining track record in economics. The industry should expect a high level of engagement from her.”

One thing it can expect her to engage with sooner rather than later is UK construction’s somewhat battered reputation for delivering on time and on budget. “This industry is world class in its own way, but it has a problematic reputation and we have to focus on project evaluation to improve delivery.

“We have to fix this – it’s vital. We have to deliver the Olympics! But I would like to assure the industry that I think this problem is certainly fixable.”

As Vadera straightens the fabulous scarf and laughs along with her PR officer, it is hard to imagine the ferocious political beast that people so often describe.

But it only takes one sentence written by her former speech writer, Martin Vander Weyer, to prove the point: “The serious minded but likeable thirtysomething I knew has transmuted into the assassin of Railtrack, the ass-kicker of Transport for London, the axe-wielder from the Treasury whom ministers fear as acutely as they fear Gordon himself, with whose total authority she speaks.”

Dear construction industry: you have been warned.