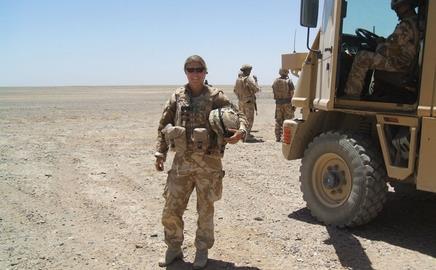 The Afghan desert is a long way from Cyril Sweett’s London office, but for Captain Louise Greenhalgh it’s just another day staying one step ahead of local hazards

The manoeuvre was hailed as one of the biggest successes of modern military history and one of the most dangerous missions since the Second World War. In late August 2008, a 22-tonne turbine bound for the Kajaki hydroelectric dam in Afghanistan’s Helmand province was driven by Nato forces along a 100-mile secret route. It involved crossing the hostile Afghan desert in the heart of Taliban territory.

Before the convoy could advance, a small team of bomb disposal officers worked to secure the path. Among them was 28-year-old Captain Louise Greenhalgh, a soldier halfway through a six-month deployment abroad and 3,000 miles away from her other place of work, the second floor of consultant Cyril Sweett’s London office.

This construction risk manager is also a 10-year member of the Territorial Army, and the first female bomb disposal officer to serve in Helmand.

“We had just got back from R&R – our two-week break in the middle of our tour – and there was a request that they needed us up at Kajaki,” she says, now safely back in the UK. “It was a matter of ‘right, get your stuff together and get going’. We spent 10 days preparing and patrolling the route.”

It is hard to reconcile the image of a frontline soldier in body armour with the suited consultant at London’s Grays Inn Road. But Greenhalgh believes the two roles have more in common than people think. “Bomb disposal is very like risk management. There’s problem solving, planning and organisation. You have to stay calm, try and limit the possibility of explosion and lower the impact if there is one.”

She downplays the dangers she faced including rescue missions and gunfire. “Normally it was a small amount of fire, then it would move off. You get used to it.”

And any suggestion that, as the only woman in her regiment, she might have had a harder time than most is met with a puzzled expression.

Since choosing the TA over the “less exciting” university sports clubs during freshers’ week at Kingston University, she has been an active reservist – training one night a week and one weekend a month and rising to the rank of captain.

She opted to join the TA engineers team because of its “work hard, play hard” ethic, and bomb disposal struck her as an “interesting challenge”. She proved to be a dab hand at it.

Greenhalgh always knew she could be deployed to a war zone. Receiving an official envelope on her doormat a year ago was a big moment. “They call it ‘the brown envelope’,” she recalls. “There was a mix of emotions: fear, excitement, pride in being selected. It took a while to sink in. I had three months to prepare and go through extra, intensive training.”

But before she could leave, there was the small matter of sorting out her other job here in the UK. Greenhalgh was on secondment to London’s Southwark council and Cyril Sweett had to replace her quickly to keep the client happy. The firm received funding from the Ministry of Defence to help out with her sudden departure.

Her colleagues kept in touch throughout her tour. “They used to send me the best packages,” she says. “For my birthday, I got one that had pictures of everyone in the office holding up signs saying ‘Hello’ and ‘How’s the tan?’,” she says. “Getting post like that was such a morale boost. When you come in from patrol and see what you’ve got lying on your bed, it’s great.”

I often think about the colleagues we lost, but at the time you just have to pick yourself up and get on with things

One such delivery sticks in Louise’s mind.

“I ordered a paddling pool on Amazon and it was the best £20 I have ever spent. By July, the temperature was 50ºC so if I didn’t have any work to do, I’d sit in the paddling pool with my friends.”

It’s a strange life at Camp Bastion, located north-west of Helmand’s capital Lashkar Gah. It’s an eight square mile, 2,000-person base in the middle of the desert where people can watch DVDs, play volleyball or even grab a bite at Pizza Hut. They are also kept awake at night by Chinook helicopters on twilight missions to rescue colleagues with bullet wounds or severed limbs.

“We would accompany the medics out to the battlefield to pick up casualties,” recalls Greenhalgh. “There were some terrible sights.”

Here she clams up, unwilling to give more detail. The camps often came under attack and Louise says on average there was a death a week during her time in Afghanistan.

“I often think about the colleagues we lost, but at the time you just have to pick yourself up and get on with things,” she says.

“I had moments of intense fear, but the thing about being out there is you’re not on your own. When you come under fire, there is air support within seconds and then the fear goes. At night it can be hard to sleep because of the mortars, but you get used to it.”

When they weren’t stationed at Bastion, Louise’s regiment – which also included a construction site manager and a heating engineer – was sent to smaller, more exposed outposts up to 180km (or 28 minutes’ flying time) away.

Facilities were basic. “We had weight-lifting equipment made from scrap bits of metal and at night it was a matter of sleeping on a camp bed under the stars or playing cards by candlelight – I learned poker.”

Asked whether army living has affected her attitude to life back home, Louise says: “It just makes you worry less about the smaller things.”

But perhaps it’s more than that. As she leaves, Louise scoops up the plate of uneaten biscuits from the table: “I’ll take these for the team,” she says.

6.30am Get up, go to gym or run around the camp’s perimeter

8am Breakfast: we’re offered everything from pancakes and croissants to a full fry-up – I tried to stick to cereal

9-12pm Strategy meeting; preparing for operations; maintaining vehicles and stores; training, such as running through drills or checking communications equipment

12-1pm Lunch: either the "fat boy's" choice of sausages and pies or salad

1-5.30pm We are on call all day, but now we go on missions: accompanying search parties on patrol; locating and destroying explosives. Otherwise we check emails and write letters home