Braving the cold: Mike Farley on coaxing Persimmon back to health 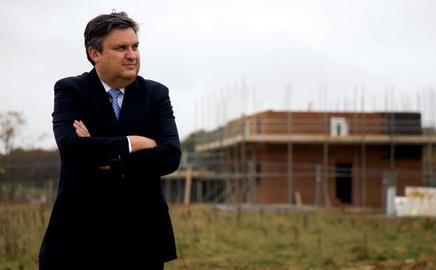 Mike Farley had barely got his feet under the desk as Persimmon chief executive when the recession struck, leaving the company with a plummeting share price and soaring debts. Here he tells Tom Bill about his plans to reverse those processes

Mike Farley must feel like the man who not only arrived late to the party but discovered he was on clean-up duty the next day. Between 2001 and 2006, as boss of Persimmon’s southern division, he watched the housebuilder become the toast of the City as it made bold acquisitions like Beazer and Westbury, sending its share price soaring from 244p to £15.

The question now is how the 26-year Persimmon veteran hopes to regain the housebuilding crown in a sector where the new “darlings” have been living a more demure and debt-free existence. If the task worries him, he’s not showing it. “The whole sector is in new territory,” he begins, dismissing the “darling” tag. “You can’t take anything for granted now. The City isn’t worrying about your results today, they are looking 18 months down the line.”

But it is the 18-month view that causes some to worry about Persimmon. Robin Hardy, an analyst at KBC Peel Hunt, says two factors will hinder the company compared to its peers. “It has a seven-and-a-half-year land bank, which is two years longer than anyone else, so it has more land to work through at today’s lower margins.”

The other issue, he says, is that it is the only listed housebuilder not to have raised cash from shareholders to buy new land. Hardy adds: “Bellway is the one to come out of this looking clever, with a five-year land bank and no debt.”

Farley rejects the claim the company has one hand tied behind its back and says it has enough banking headroom to buy land when it becomes available. He suggests a rights issue would be used to fund an acquisition. “There just aren’t good opportunities out there at the moment,” he says.

Persimmon could, of course, be in a much worse position. According to Liberum analyst Charlie Campbell, Farley must take credit for walking away from a deal to buy Taylor Woodrow. Its merger with George Wimpey in March 2007 ranks alongside Barratt’s £2.2bn purchase of Wilson Bowden as a deal that left those involved courting collapse. “It was one of the best decisions we ever made,” Farley says, revealing that talks did not get very far because of the asking price.

Today, a father of two grown-up sons, he lives with his wife in a converted barn in Oxfordshire. He talks affably about how his son has unsuccessfully tried to convince him of the merits of watching local football team Swindon Town (he’s more of a rugby man), but he is wary of opening up too much, declining to “personalise things” when asked about his legacy as chief executive.

There is none of the invigorating bluntness of Steve Morgan at Redrow or the studied soundbites of Tony Pidgley at Berkeley. Some have even gone so far as to question his big picture credentials but he is universally praised for his grip on the details.

Another analyst described Farley as “a housebuilder’s housebuilder” and it rings true when he talks about why he enjoys the industry. “I still get that buzz when the first pair of curtains goes up on an estate. Rather than making widgets you can actually see the end product and you hope people will be happy in those houses.”

Housebuilding being housebuilding, he has no mould-breaking plan up his sleeve to spark recovery and Hardy suspects Farley, along with his peers, is hoping that house price inflation will ride to the sector’s rescue.

Hardy says: “What happened shows just how little control housebuilders actually have over anything. Unless someone can convincingly show they are going to take £30 per square foot off the build cost, they are all just sitting around waiting for prices to go back up.” It will be particularly tough against a backdrop of rising materials and build costs that can’t be passed on to buyers.

Farley is clearly aware of the dilemma and indicates there will be a greater reliance on Persimmon’s Space 4 off-site business, which has one factory in Birmingham. He says: “It gives us the ability to increase and decrease production rates and be much more flexible. Maximum output is between 5,000 and 6,000 per year and we are currently doing 2,000.

We could also lay down another factory.”

But it will only help up to a point. The trouble, he says, is that people won’t pay a premium for an off-site home. “You need to get the message across that they can reduce energy and running costs by 20%.”

Neither is he hugely effusive about the impact of the private rental sector initiative, suggesting the focus would be limited to the South-east. “I don’t want to overblow it. An Englishman’s home is still his castle, it’s not a panacea to increase volumes by 20%.”

It sounds like the housebuilder’s housebuilder is preparing for a long and steady road to recovery for the company; Persimmon will build 9,000 houses this year, a far cry from the 20,000 it was gearing up for a few years ago. The only alternative, as one analyst recently suggested, would be “a sizeable and transformative” acquisition. The dangers of such a move won’t need to be spelled out to Farley.