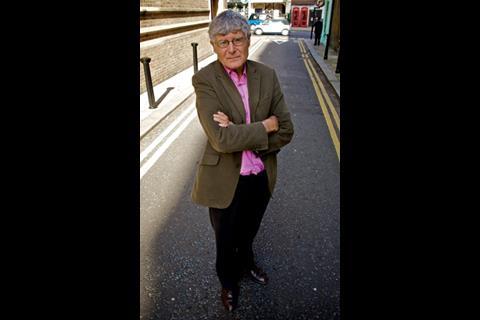 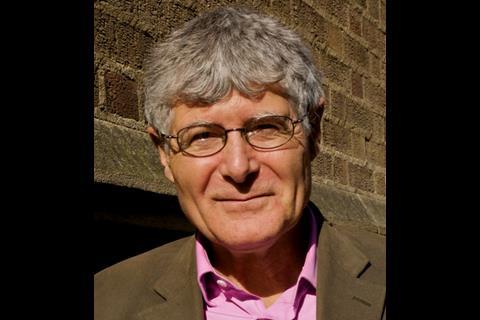 Former chief inspector for schools Chris Woodhead carries a big stick (he’s broken his ankle) but you wonder if he’d rather use it to thwack all those dunces who don’t get the difference between a good school and a bit of architectural frippery. Emily Wright learns more

In a dainty French patisserie tucked away behind High Street Kensington, former chief inspector for schools Chris Woodhead is having afternoon tea. But the scene is far from being one of Earl Grey-induced tranquillity. In fact, it’s more like being in a disaster zone – albeit one with mini chocolate eclairs and custard piping – and stress levels are high.

Woodhead needs to cut the interview by half an hour to get to Basingstoke by 6pm, the cafe is full to bursting and it is almost impossible to hear a word anyone is saying over the intermittent grinding of coffee beans and the squealing bursts of the milk frother. Oh, and outside an elderly pedestrian has just been run down by a motorbike in full view of Woodhead’s window seat. “Oh God,” he says, straining to see what’s happened – he can’t actually stand up as he is nursing a broken ankle, just to add to the disaster and injury theme. “I think there has been an accident. It looks quite bad.”

It doesn’t seem right to continue the interview with someone lying slumped in the middle of the road and so, despite the ticking clock, the interview is put on hold as the entire cafe gawps at the arriving ambulances and solicitous kerfuffle of medical personnel. Thankfully news soon filters through that nobody has been seriously hurt so we plough on through the cacophony of sirens and flashing lights.

Pouring his tea, walking stick propped against the wall, Woodhead looks frail. But as he starts to speak it becomes clear that he lives up to his reputation of being one of the most controversial figures in UK education. A former teacher himself, Woodhead hit the headlines in 1999 for allegedly having a nine-year affair with a former student. And he was back in the firing line later that year when he told an audience of trainee teachers that teacher–student relationships, while regrettable, could be “experiential and educative on both sides”.

After resigning as chief schools inspector in 2000 – having spent six years in the role – he has continued to shock as a columnist for The Daily Telegraph and The Sunday Times, and is now chairman of Cognita, a company dedicated to fostering private education. Today he is on sparkling form as he delivers his verdict, succinctly and with the sharpest of tongues, on the government’s handling of school buildings, education and the economy – as well as taking time out to make sure everyone in the cafe knows he thinks Gordon Brown’s time is up.

Kicking off with the bricks and mortar

side of the education system and the government’s £45bn Building Schools for the Future programme, Woodhead starts as he means to go on – in attack mode. “With regard to academies in particular, there just hasn’t been enough thought given to the fact that they’re schools,” he says. He adds that much of what is being built is designed to massage the ego of its architects: “To have a plate glass window palace doesn’t make a good school. I went to one such school recently and it had a huge corridor down the middle that sloped downwards. What happens at break time? All the kids charge down knocking over whoever gets in way. It is completely impractical. The point is that I don’t think exotic school buildings are the solution to educational problems and a lot of money is being wasted on architectural frippery.”

Woodhead, now on a roll, does not stop there. He says designing schools that just look good needs to be stopped: “I’m not saying we don’t need improvements to school buildings – too many are shoddy and second rate. But the building industry and politicians need to think very hard about what makes better schools, not what makes for good glossy pictures in magazines.”

Woodhead adds that the solution to this problem is simple. It is a question of the government and the construction industry adopting some “old-fashioned common sense”. And getting headteachers and senior staff members more involved in the planning process would be a good place to start: “Ideally, the head should sit down months in advance to tell the architects and builders what makes sense for that particular school,” he says. “Okay, so they won’t have practical building knowledge but ultimately a good school building will emerge from the closest dialogue possible between school staff and the builders and specialists.”

Moving on to education policy and the government more generally, Woodhead is even more cutting. Earlier today Charles Clarke appeared on the Today programme to say the prime minister had a few months to improve or face a leadership contest. It comes as little surprise that Woodhead agrees. “I knew Charles when he was the education minister and I have a great deal of respect for him,” he says. “I think what he said publicly is what many, many people within the Labour party have been saying privately. It’s true – the government is in a terminal mess and it’s highly unlikely that Gordon Brown will get them out of it.”

Woodhead makes no effort to hide the fact that he also considers the government to be floundering. “Oh, I think it is pretty ineffective on every front and we’re seeing policy unraveling all over the place. Health, education, the economy – we’ve not seen improvements that correlate to the amount of public money invested.”

And he points to education as an example, dismissing most of Labour’s ideas as nonsense. “Take the raising of the school leaving age to 17. This is an example of government being in cloud-cuckoo-land. There are tens of thousands of 14-16 year olds truanting because they’re unhappy and not motivated in school. Keeping them there longer will not help.”

Woodhead says practical apprenticeships or vocational training for those who have failed to perform academically would be a much better way forward and uses the construction industry to explain why. “I’d have thought that practical skills training is what an industry like construction wants anyway, rather than turning out people who can write essays about the sociology of building and all the rest. Surely construction needs people who can build buildings?”

He stops to draw breath and, for the first time in several minutes, the tirade comes to a halt. But having spent most of the interview identifying problems, what about some solutions? Woodhead’s key idea, first suggested by the Thatcher government in the eighties, would be to give vouchers to every parent of a child under 16 to be cashed in at a state or independent school so they can buy the kind of education for their children that they want. And he believes young people over 16 should be given the voucher themselves so they can choose the kind of training that suits their individual needs, rather than being “steamrollered” down a particular route that may not be the right for them. But he adds that he is unconvinced we have a political party in power, or even in the wings, that has the courage to implement such a radical change, or any radical change for that matter.

So what does he think the future holds? “More of the same,” he sighs draining his teacup. “More of the same. And this country needs change. Just look at the state we’re in. It’s a disaster. But while I’m very anti the current government and see it to be totally ineffective, I am not sure the Conservative government would do much better. It’s a sorry state of affairs.”

As he speaks he hauls himself out of his chair onto his stick and hobbles out of the coffee shop past the ambulances still parked outside and into the horns, smog and roar of London’s afternoon rush hour.” Disaster sounds about right.

They may be pretty but not enough is being done to address the real problems in terms of what should be done to raise educational standards. Too much flair and not enough focus. C–

The government needs to work more closely with headteachers and not allow architects to build glass palaces to massage their own egos. The effort is there but it needs a total rethink to achieve the right outcome. D

I don’t agree with raising the school leaving age, diplomas or any of the changes to the national curriculum. No good ideas demonstrated. F

We’re the only G7 country talking about heading for a recession. It’s a disaster. Failing miserably. F

I don’t see anything in principle wrong with the PFI concept, but there is a problem with the complexity of the tendering process. That said, it is essentially good to involve the private sector. On the right tracks with some good ideas. B+

Overall Must try harder in almost every subject