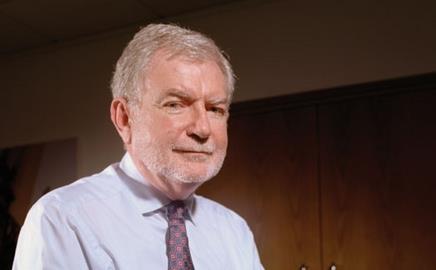 A slump in private housing and a boom in the social sector – not to mention a certain OFT inquiry – have led to restructuring plans at Kier. Its normally outspoken chief executive, John Dodds, tells Tom Bill as much as he dares

John Dodds winces when reminded of the comments he made after announcing Kier’s interim results on 27 February. The chief executive described the City as “a pack of ill-informed sheep”.

The reason for his invective was that despite the firm’s strong performance over the previous half year, including an 18% rise in turnover to £1.2bn, its market cap had fallen 40% to £450m in the four months after the Northern Rock debacle. There is no hint of a retraction, but this time round he is careful to pepper the interview with the rider: “That was off the record …”

Discretion is not something that comes naturally to the Durham-born former civil engineer but today he is giving it his best shot. You might wonder why he bothers. Despite his bluntness – maybe even because of it – Dodds remains a popular figure in the City. One of the analysts he took a swipe at says: “He’s a straight-talker, which is refreshing. There aren’t many other chief executives out there you’d want to go out for a beer with.”

His comments went down even better among his staff. One presented him with a bottle of Black Sheep beer. This raises a smile as he sprawls back in his chair. But things have got a little more serious since February. First there was April’s dramatic slump in the housing market. The sector accounts for a quarter of Kier’s profit and Dodds says reservation levels have fallen by about two-thirds in recent weeks, which tallies with the picture presented by the Home Builders Federation recently.

April also brought the Office of Fair Trading’s investigation into cover pricing – Dodds is at pains not to call it “bid rigging” – in which Kier is implicated.

But it is the housing crisis that has led Dodds to rethink the business: “We’re assessing our reaction to the changes in the marketplace and examining all avenues, including a restructure,” he declares.

Dodds explains that the reappraisal has also been triggered by the boom in the social housing sector and, in particular, Sir Bob Kerslake’s appointment as boss of the Homes and Communities Agency in March. “I have a lot of respect for Bob and we will reposition ourselves to take advantage of all the work in the next few years.” He cites an annual workflow of £5bn and you can see the glint in his eye. The plan is to grow the social housing business from £100m to £250m in two years.

So, more social housing work then. But what else can we expect from the new-look Kier? “Kier has been roughly this shape for a very long time,” says Dodds. “The restructure will bring the big business units closer together. Lines of communication will strengthen and we are reviewing the reporting structures.”

I’m having dinner with my chairman tonight to discuss the succession plan. Not that you should read anything into that

He’s purposefully vague on the detail, adding: “The restructure is in its very early stages and won’t be completed until the end of the year.” He is quick to rule out acquisitions along the way, though.

As for the OFT inquiry, Dodds complains that it is occupying more of his time than he would like (Kier was one of the 112 construction firms accused of bid rigging by the OFT on 17 April). He estimates it takes up an average of one day a week although he is keen to stress that his first priority “is to run the business, which doesn’t mean burying my head in this inquiry”.

Asked whether he would like the OFT to publish the list of nine contractors accused of more serious allegations of compensation payments, he says not. “Kier isn’t one of them and we’ve assured our clients that we’re not on there, which is enough.”

He is confident clients have understood the company’s position and says it has not lost a contract opportunity as a result of the probe, but he concedes that the public sector may think twice if there are prosecutions. “The risk is that you have a procurement officer who will default to negative.”

There’s no doubt that there is plenty of fight left in Dodds but, at 62, rumours have swirled in recent years about his departure. It’s something he is all too aware of: “I suppose you’re going to ask me when I’m going to retire?” he says midway through the interview. “I’m having dinner with my chairman tonight to discuss the succession plan – not that you should read anything into that,” he adds hastily. “It’s the normal kind of planning that happens in companies.” Pressed for a date, he smiles but reveals nothing more than “it won’t be this year”.

The other big news for Dodds straddles his personal and professional lives. In July he is getting married to Kier’s finance director Deena Mattar and the 42 year old has been touted as his natural successor. Despite murmurs within Kier about a conflict of interest should she take the top job, the City seems convinced of her suitability. One analyst says: “She’d be fantastic. She symbolises everything the group stands for and has her finger on the pulse of every aspect of the business.”

Dodds chooses his words with even more care than usual. “Our preferred succession route would be from within. Deena is one possible candidate but not the only one.”

When asked how others in the industry would remember him, he snorts: “I’ve no bloody idea. You’d better ask them. A Luddite, I should think!” And he politely declines when asked for the names of those construction bosses he admires and those he doesn’t. But you can see he’s fighting the urge to lounge back in his chair and reel off the names.

Kier has signed up to support Rebuilding Trust, Building’s campaign to restore clients’ faith in the industry after the OFT inquiry into bid-rigging. To pledge your support, please email rebuildingtrust@building.co.uk or visit www.building.co.uk/rebuildingtrust