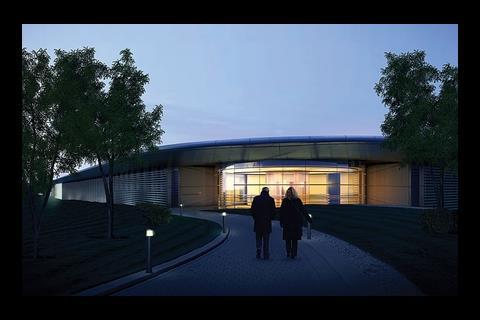 The production centre borrows many of its design cues from the existing technology centre, including the distinctive bullnosed projecting roof and horizontal aluminium cladding tubes. Like the technology centre, the new building has a glazed entrance rotunda. This is a design development drawing – the rotunda cutaway will have curved sides rather than the straight sides shown here 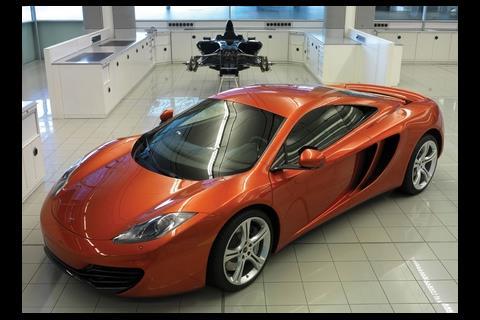 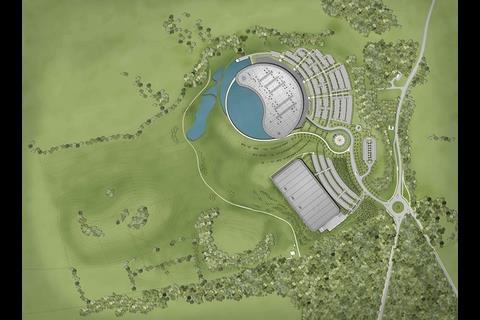 Below: The production facility is 400m from the existing, serpentine-fronted technology centre. Landscaping and trees will hide the new building from the road (right of picture) and a footpath (left) 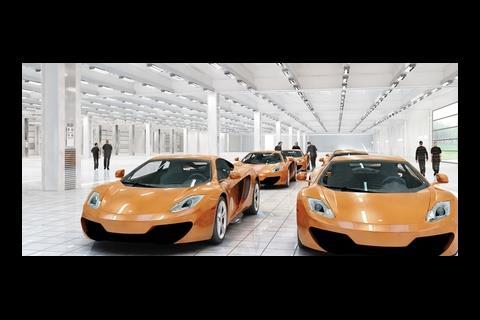 A big span, minimal fixed equipment and a clean design were the key criteria for the interior

Foster + Partners has designed a road car factory for McLaren to park alongside its Formula One centre and, like that, it’s an impressive demonstration of streamlined high-tech architecture

Two weeks ago, Formula One carmaker McLaren announced that it was going to start making road cars. This was surprising considering the company’s single-minded commitment to F1. The firm presently has Lewis Hamilton and Jenson Button in its team, and has been a contender in F1 since 1966. Less surprising is the nature of the product: it will be a low volume, high performance, technologically driven sports car competing against F1 arch rival Ferrari and other supercar makers like Lamborghini.

The plan is to design, engineer, test and make 4,000 cars by 2015. McLaren plans to get 1,000 of the first car, the MP4-12C, on sale in 2011, which doesn’t leave it much time. So it is no surprise that enabling works have begun on a dedicated new facility, the £40m McLaren Production Centre adjacent to the firm’s existing F1 development centre at Woking in Surrey. Such is the secrecy surrounding this project we can’t reveal the name of the contractor and other project team members apart from the QS (which is Gardiner & Theobald) but we do have the first exclusive pictures and details of the new building.

Ron Dennis, McLaren’s chairman, personally selected Foster + Partners on the back of the successful technology centre, which was designed by Foster and completed in 2003. The 32,000m2 facility, which will house 400 staff, had to be able to produce tailor-made cars in low volumes, yet offer a degree of flexibility in case the business model changes in the future. It also had to act as a marketing tool for the new marque since many prospective customers will want to visit the site and witness the birth of their car.

Iwan Jones, a partner in Foster and the architect in charge, explains that designing a modern car plant is essentially process-driven and requires a thorough understanding of the way it’s done.

Jones and his team worked closely with the client, including Dennis himself, who is famed for his meticulous attention to detail.

One of the main objectives was to create a space where specialised, traditional craftsmanship skills can be combined with efficient high-volume production.

The planners wanted the building to be concealed from view and be smaller than the existing technology centre. Foster’s solution is to restrict the height of the building by opting for a basement and ground floor configuration. The production units – body construction, painting and assembly – are linked closely on the ground floor. All the support activities are in the basement. Landscaping and trees will help hide the building from an adjacent road and public footpath. This discreet approach is aided by using a tunnel to link the two buildings: this gives the automotive team quick access to the F1 engineers in the technology centre 400m away.

Externally the new building echoes the existing technology centre. “Visual elements of MTC are repeated within the new building in order to achieve a harmonious family of details,” explains Jones. Like the existing building, the production facility will have a projecting roof with a distinctive bullnosed edge and metal cladding panels overlain with horizontal aluminium tubes. The building also has a glazed entrance rotunda and similar interior treatment to the technology centre, including glazed ceramic floors.

Considering that this is a car factory, a lot of effort has gone into keeping the interior simple and uncluttered. “We’ve developed an innovative integrated structure and services solution that also caters for future flexibility,” says Jones. Minimising the number of internal columns was essential to maximising flexibility but large spans mean deep roof trusses that weren’t going to work in a height-restricted building. The solution is a double arrangement of steel I beams for the columns and horizontal beams; air-conditioning ducting and other services are hidden between them. Displacement ventilation is used to condition the building, and heat and light come from a CHP.

The keep-things-simple approach does give McLaren plenty of flexibility. There will be no heavy duty manufacturing tooling such as the robots that most modern car makers rely on. “The flexibility I get from my technicians and their attention to detail is what we need,” boasts Alan Foster, operations director at McLaren Automotive, and the man in charge of the project. The assembly line has been designed to cover all future derivatives. Foster’s team stayed clear of large pieces of equipment that once installed could not easily be moved around. And they have avoided massive conveyor systems. Instead, cars are moved through the building on wheeled trolleys.

“The main construction fixtures are simple and modular, they can be moved in a matter of hours and yet provide a dimensional accuracy equal to anything in the industry,” Foster says. “Our investment is tuned to exactly what we need to do and is comparatively small. This facility will make a complete range of vehicles for McLaren – things that have not been fully designed yet.”

McLaren also needs the building to appeal to its target market. Customers will be encouraged to visit the site, customise their cars and watch them roll off the production site. “It isn’t a Disneyland tour train with robots and welding guns firing sparks everywhere,” says Foster. “It’s a calm, thoughtful, tranquil environment, with a steady measured pace and approach to work.”

Got a new motor?

The MP4-12C is not McLaren’s first road car venture. That was the McLaren F1 – marketed as the “ultimate road car” – which was built in limited numbers in the nineties. And there was the partnership with Mercedes-Benz, the fruit of which was the SLR supercar. Production of that (and the McLaren–Mercedes partnership) ended last year.

“My task was to find out what kind of impression we should have with the 12C,” says design director Frank Stephenson. “Should it be bold, quiet or strong – it was all up for grabs.”

Stephenson, who has worked on such cars as the 2001 Mini, the Ferrari F430 and the Fiat 500, says there was infinite freedom when it came to designing McLaren’s road cars. “If you work with a car company that already exists, then all new products have to be genetically linked. But with McLaren, we didn’t have these restrictions.”

The result is a mid-engine, two-seater sports car priced between £125,000 and £175,000. Power comes from a twin-turbocharged, 3.8-litre V8 engine that has a top speed of more than 200mph. What sets the 12C apart from its competition is that it has been built around a mono cell carbon fibre chassis, which is typically found in “hyper cars” that cost over £500,000.

This has been made possible using a one-piece mould to reduce the production cost of a single tub from around £100,000 in a F1 car to £6,000. Thanks to this, the 12C promises to be one of the most powerful, efficient and lightest cars in its class. Stephenson says: “This is our principle – to introduce new technology and let it cascade down to our road cars.”