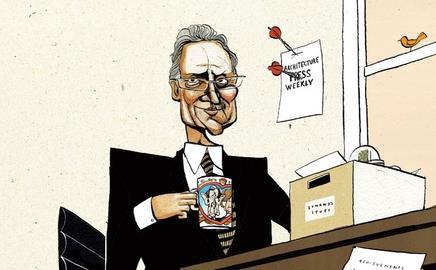 Regrets? He’s had a few. But then again, too few to mention – unless pushed. Sunand Prasad, the outgoing president of the RIBA gives Dan Stewart a list of his achievements while in office, and fighting Prince Charles was only one of them

To prepare for this interview the outgoing president of the RIBA has written a list of his achievements over his two years in the job. The problem is he can’t find it. “You’re going to write about this, aren’t you?” he asks. “Prasad appears confused and disorganised.”

In fact, as usual, Sunand Prasad is anything but. While people are more than content to criticise the RIBA, you rarely hear a bad word spoken against its 72nd president. Anyone who has worked with him says the same things: he is serious, bright, committed. “He has been a diligent and even-handed president,” says Paul Davis, a board member of the RIBA Trust. “He understands the members and the charter, and is more balanced than anyone else might have been in that job.”

Today, as he approaches the end of his term, Prasad is in a jovial and forthright mood, offsetting his considerable self-belief – as evidenced by that list of achievements – with ready charm. His term has been nothing if not eventful. He took over from Jack Pringle in September 2007 at the summit of a building boom, and will hand over to Ruth Reed next week in the pit of a recession. In spite of it all, he is sanguine. “I’ve enjoyed every minute of it,” he says. “Well, nearly every minute.”

Prasad has by now located his list of feathers in his cap, and as you might expect, they are numerous. When the Planning Act was going through parliament, the RIBA lobbied successfully for a clause that placed a duty on planning authorities to consider design. It also played a large part in securing a VAT cut on home improvements. It has forged links with other bodies such as the Construction Industry Council, with which it worked to improve access to the industry for women and ethnic minorities, and the Royal Town Planning Institute. The most recent achievement has been a restructuring of the executive to give the board of trustees more power to organise the institute, and allow the elected council to focus on the broader issues facing the profession rather than the minutiae of RIBA politics.

Prasad is proudest of having pushed climate change to the forefront of the RIBA’s agenda. “Our positioning has been sustained despite the recession, and we are now recognised as being at the forefront of green lobbying.”

You get the impression that this is something of a personal crusade, especially when it comes to bringing the membership along with him. “I’ve been to nearly every region and been personally involved in CPD classes on climate change,” he says. “We’re beginning to penetrate the membership, but it’s never as much as your best ambition.”

His one disappointment here is that he has failed to persuade other construction trade bodies that future policy should be based around the “contraction and convergence” framework, or an equitable balance of carbon emission limits that would allow the developing world to grow as the developed world shifts to clean energy. “We need to persuade people that this is a pragmatic approach and the only way of going forward. If you look at government policy, it is based on theories of contraction and convergence.” He says it is something he will continue to lobby for as the “tsar” heading the RIBA’s combating climate change programme.

I did get feedback, particularly from architects of my generation, that was not entirely positive. But that’s all part of the knockabout, isn’t it?

There are, inevitably, further disappointments. The work that Pringle had begun on reforming government procurement procedures has not progressed as far as Prasad would have liked. “We still have a pretty flawed process, especially on BSF [Building Schools for the Future]. There has been an enormous effort to improve quality, which is great, but we need to start off on the right foot,” he says.

Prasad adds that part of this is owing to a “schism” between contractors and designers, not least over the RIBA’s stance on the procurement costs of PFI. The RIBA idea was to bring in “smart PFI”, whereby a design would be sorted out before the job was put out to tender, rather than doing both at once. “The RIBA’s take on this was opposed by other voices from the sector,” he says. “I think architectural education can help foster a greater understanding of working with the wider industry, but it has to be mutual.”

The man and the media

On a more personal level, Prasad also wishes he had had a better relationship with the architectural press. In fact, it seems that “dealing with the media is the most frustrating part of this job”. On the other hand, he acknowledges that it has its uses, too: the publicity surrounding the Prince of Wales’ speech at the RIBA earlier this year gave the institute the highest profile it has had in years.

And this is what Prasad is likely to be remembered as – the president who brought Prince Charles back to the RIBA, 25 years after he made his “carbuncle” speech. This is a badge of pride to him, in spite of the criticism he received as a result. “I did get feedback, particularly from architects of my generation, that was not entirely positive. But that’s all part of the knockabout, isn’t it? It’s proof that there’s life in this industry. We didn’t want to shy away from it.”

Prasad’s criticism of the prince’s intervention in Richard Rogers’ design for the Chelsea Barracks site, however, is unflinching. “The prince effectively caused an architect to lose his job, and now his own foundation gets to take that job on. There’s something deeply worrying about that. My role as president is to help the RIBA’s members do their jobs,” he says. “You can’t advance architecture without defending the conditions that allow it to flourish. Democracy is vital to those conditions, and however imperfect our planning system is, it is driven by something that is essential. It is utterly destabilising for someone with that power to attempt to intervene like that.”

Is he worried though that, after being so outspoken about this, he might never receive a knighthood? “No,” he laughs. “I turned down an honour in 2000, and I don’t think you get a second chance once you’ve said no.”

architects are sceptical about what the RIBA does, and they’re not easily convinced. But deep down, they love us. They may not realise it all the time, but they do love us

He says this was not to do with any republican principles, but more to do with the old-fashioned nature of the honours system. “I don’t have any problem with the idea of an honours system rewarding people who serve the community and so on, but I object to the idea of being rewarded by the British empire. As someone who was brought up in India, and being told of the sacrifices that were made during that time, I couldn’t accept something that represented that.”

For him, the honour of having represented his profession is enough. But has that honour become devalued in recent years? Only two candidates stood for the presidency last year, and there are concerns that, during a period when architects are struggling to survive, few will want to commit their time to an unpaid position.

Prasad reveals that he has set up a panel to look at a system of remuneration for future presidents. “People like me in their later careers can probably do it, or sole practitioners like Ruth [Reed], but we’re losing out on the forty somethings in the ascendant in their careers, who simply can’t afford to do it.”

Any system of compensation would first have to be agreed by the membership, he says, but could attract a different calibre of architect. “Forty years ago, you’d have the equivalent of Norman Foster or Richard Rogers competing to become president. That just isn’t a possibility now.”

In spite of that, Prasad has nothing but praise for Reed, who has already been the subject of low-level sniping from those concerned by her relative inexperience in the limelight. “Ruth is a very clear, committed person,” says Prasad, firmly. “Everybody has a different style, and hers will be to bring crystal clarity and focus to the issues.”

What advice would he give to an aspiring president? He pauses. “First, get to know your members very well. There are no excuses for not knowing your membership. Second, the clearer you are in your own convictions, the better job you are likely to do.”

Being the RIBA president isn’t an easy job, he says, and some of that is because of the members. “Architects are hard nuts to crack,” he smiles. “They’re sceptical about what the RIBA does, and they’re not easily convinced. But deep down, they love us. They may not realise it all the time, but they do love us.”

black eyes and feathers in his cap

LOW He is accused in February 2009 of influencing elections to the Architects Registration Board by unfairly endorsing candidates. He says allegations are “personal”