The delivery man: Robert Napier, new chair of the Homes and Communities Agency 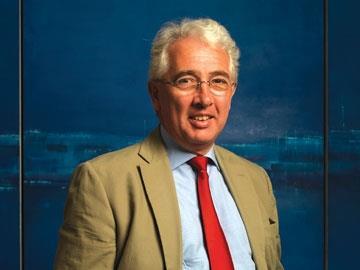 Can Robert Napier build 240,000 homes a year and run the new government agency in the toughest housing market since the seventies?

Robert Napier and his small team of press advisers seem anxious about getting the newly appointed chair of the Homes and Communities Agency’s picture taken just right. One adviser used to advise John Prescott, and happened to be snapped engaging in a rather inopportune game of croquet with him at his Dorneywood ministerial residence a few years ago, so her nervousness is understandable. Napier, however, is anxious for a different reason: he relates how, as chief executive of building materials company Redland during the depths of the last housing downturn, he allowed his photograph to be taken in his warehouse, which was full of supplies. The subsequent stories showing him virtually buried under a pile of unsold bricks were less than helpful, he chuckles.

In a sense, Napier is under another pile of bricks. Currently chair of regeneration agency English Partnerships (EP), in December he will cross over to the HCA, which will be formed from the merger of EP with the Housing Corporation and some central government functions. He will suddenly become directly responsible for getting 240,000 homes built every year in the middle of the toughest housing market since the seventies. The NHBC says private home starts are now running 60% down on last year, and nobody expects more than 100,000 homes to be started. With the government vacillating over possible changes to stamp duty, the piles of bricks in the yard are only getting higher.

Depending on your viewpoint, the creation of the HCA is either the last great hope for the industry or a dangerous move at a dangerous time. It is also an interesting move for Napier, a man who has flitted back and forth across the thinning divide between construction and conservation over his career. This man, with a £16bn budget to build homes and regenerate cities, told the Guardian in 1999 the thing that made him happiest in life was “an unspoilt landscape”. Favourite city? “I prefer the country.”

Napier’s passion for nature stems from his background. He was born in Dundee and brought up in Perth, both in the east of Scotland, where he gained a love for “wild open spaces”. From a family of self-made professionals, he was educated privately, at Sedburgh in Cumbria. Today he seems every bit the establishment figure. While he keeps his politics private, he has the air of a traditional Conservative MP, partly because of the voice – impeccable RP with a hint of east-Scots burr (more Malcolm Rifkind than Gordon Brown). After 30 years in environmentally dubious companies, including mining giant Rio Tinto Zinc and Redland, he made quite a stir by becoming chief executive of green charity WWF in 1999. The appointment was likened to putting King Herod in charge of the crèche.

Today, though, his priority is meeting those government targets. Like his chief executive, Sir Bob Kerslake, he is keen to talk about the “single conversation” the agency will strike up by linking government funding for social housing, housing growth areas, council housing refurbishment, regeneration and the Thames Gateway. The idea is to use this cash to enable councils to fund the schemes they want to put forward.

He does not, however, seek to downplay the situation the government is in with housing. He says: “What’s extraordinary is how quickly it’s happened. If you look at graphs comparing this downturn to previous ones, it’s just fallen off a cliff. It’s been startling, and it’s frightened people.”

The communities department, with EP and other agencies, is currently working up a package of measures to address the downturn, to be unveiled in the autumn. When I suggest the government looked initially like a rabbit caught in the headlights, he admits it has been shocked and forced to regroup. “If you want to use that analogy,” he smiles, “we know it’s dark out there, but we have our own lighting.”

Central to this approach will be greater flexibility over the way the agency interacts with developers than before, including more joint ventures and the use of investment rather than grant funding. The “good old EP” approach, as he characterises it, won’t be enough. He also refuses to repeat the promise to build 2 million homes by 2016, thereby coming as close as any government official has to admitting that it is unachievable. “I’m not going to get quoted on the 2016 target – it’s too difficult to tell. But that’s just being realistic. It’s not a failure. We want to get as many houses built as we sensibly can.”

Come on. It’s perfectly possible to build the homes we need without wholesale destruction of the countryside.

He also knows he will not get far bashing housebuilders. While insisting environmental targets will have to be met, come rain or shine, he professes to be happy with the industry’s progress on quality. “The better quality they build,” he says. “The more likely they are to sell houses. I don’t want to knock them at the moment.”

In public policy terms, Napier is probably best known for his very public resignation from the government team working up the Code for Sustainable Homes. The move, accompanied by a letter to the Guardian, forced the government to reassess its direction, pushing it towards much tougher environmental standards for new homes.

But it’s not hard to tell, even three years on, that such radical action runs very against the grain for such an instinctive insider. “I had never resigned from anything before in my life, and I was hesitant to do so.” He is clear he is not likely to take such a stand again.

So where do his personal commitments actually lie? Is the campaigning environmentalist of the WWF years lurking in the background behind the builder of 3 million homes? Is there not a tension here? Apparently not. “Come on,” he says. “It’s perfectly possible to build the homes we need without wholesale destruction of the countryside.

“I like beautiful places. Places that inspire you. That can be a lonely mountain top or the middle of a town, with wonderful architecture and community feeling.”

It is in helping the construction of these new beautiful places that he thinks he can resolve these very different imperatives.

But for now, he just has to get homes built in a recession. He has a theory that great leaders are those that can adjust to profoundly changing circumstances: “That’s the real test.” And it’s a test that, for the sake of the housing industry, Napier himself needs to pass.