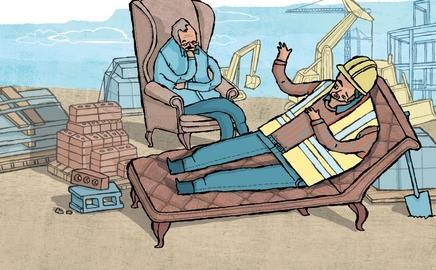 There are some things that the fledgling project manager can’t learn at university – such as how to deal with punch-ups or the nagging feeling that your team couldn’t care less. Debika Ray seeks some therapeutic advice

It’s your first day on site, you’re an authority on collaborative software, you can recite the Building Regulations backwards and you’re just itching to get going. But first you need to meet the project team.

Now imagine the scene a few weeks later. The day starts with a punch-up between two contractors, followed by news that you’re over budget and behind schedule.

The client has left you three messages grumbling that he’s not happy, the architect is trying to take control and the rest of the team doesn’t care.

Sound familiar? If so, you may need the help of our project management doctors. Here, they prescribe some antidotes to common ailments …

Esra Kurul Conflict can be the greatest source of disruption on a scheme, so it’s best to eliminate from the outset any potential situations. Bring the team together for a workshop at the beginning of the project in an informal, neutral environment – preferably a hotel meeting room rather than the main contractor’s offices. Use this to set rules, map out a schedule and allocate responsibility.

Mike Armstrong Discuss the issue after things have cooled down a little, with managers in attendance. Keep it factual and positive.

Julian Holloway Point out that there’s rarely a clear right or wrong – this might get both sides off their high horse. Give each party a chance to have its say and don’t get involved yourself – you’ll lose respect if you join in. Ask probing questions, which may make someone feel they’re not on such strong ground.

EK Delays often stem from a lack of communication. Make sure the schedule and responsibilities are set out in writing and distributed to everyone, rather than letting people assume roles. Do this before meetings so valuable time isn’t taken up shuffling through notes. Visit the site regularly to check that what should be completed has been done.

If you get involved in a project halfway through, you may inherit a host of problems, so go back over work to see what will need to be resolved at the end. Inform the relevant people early on about this. All parties should know how long each task should take and how it relates to others.

EK If you’ve fallen behind, use the critical path method to ascertain the shortest route to completion. Discard tasks that aren’t adding value and allocate the freed–up resources to those behind schedule.

Don’t bury your head in the sand. If you ignore a problem it will escalate, so identify the problem early and map out the solution chronologically. Bring in help if you need to progress quickly. If not, round up the problems to fix at the end. Remember: you’re not there to fix problems single–handedly, so don’t be afraid to ask for help.

EK Consider whether the facilities asked for are really needed, then confirm them with the client. Until you get an understanding of costs, check the price of major items against any pricing data available to you.

MA I didn’t realise early enough that initiating your own research into your client’s organisation and business is critical. It will help you understand what they need.

MA Go back to the initial bids to find out if items were priced wrongly. There should be obvious trends in the pre–qualification material so compare them for discrepancies.

EK If you find an error, contact the cost consultant immediately. If big changes have to be made, assess whether money can be redistributed from other aspects of the project, before considering asking for an increase in budget.

4. The client is unhappy

EK Many one-off clients are inexperienced in construction, so you must be clear about their expectations. Make sure they’ve taken into account everyone’s requirements for the building or someone won’t be happy with the final product.

It is vital to keep the client informed. Give regular updates but don’t overload them with detail – a quick call every Friday about that week’s progress, say, and a written report about twice a month.

MA Clients want to know you have their interests at heart, so ask questions and show you’re aware of their needs. One of my first jobs was a car repair shop. I had a massive interest in cars, so we talked a lot about the business and developed a great relationship.

EK If the client still isn’t happy and tries to take over, tell them it’s good they’re involved but that they should pass requests through you. Don’t tell them you’re in charge because you’re not – you’re acting on their behalf.

MA You need to convey a sense of purpose from the start. Before leading a meeting, I write a list of what I want to talk about, the outcomes required and who I’d like to handle each action.

EK If you want to stay in control in meetings, allocate a time to each issue and stick to it. Bring discussion on each item to a close by making sure a decision is made or someone has been given responsibility. Be prepared to explain reasons for your requests and remember to give deadlines.

EK If someone else tries to take control, acknowledge that they may be trying to help and show you’re willing to improve but give them examples of your recent achievements.

MA When discussing a problem one on one, be honest and confident but not aggressive. It’s important to respect people with more experience than you. Tone of voice is crucial: calm, not too pally and spoken with gravitas.

JH Give each party a proper opportunity to have their say, so everyone feels they have been listened to sufficiently.

EK Apathy can be caused by the wrong leadership style. Don’t immediately assign blame when someone fails; focus on the importance of learning from mistakes. As project manager, you need to motivate others by allocating responsibility.

MA Building rapport is about mutual respect, so get stuck in and show you’re dedicated. You have to be pretty firm on site, so it’s also important to relax with your colleagues – take the team out for a few beers or for lunch to reward them for good work. Loyalty is a big thing in construction.

MA Management sometimes involves getting people to do things they don’t want to do.

In meetings, have reasoned arguments and nip negativity in the bud. You must lead strongly – don’t get annoyed or be a pushover.

EK Point out that when work is unsatisfactory, others fail too. People who know the importance of their roles are more likely to take pride in their work.

7. I’m having a crisis of confidence

EK It is important to exude confidence, but don’t fake it. The worst thing to do is pretend to know something and make a wrong decision. If you’re not familiar with an issue, look it up or ask for help as soon as possible. Most firms offer you a mentor, so treat this as a learning opportunity.

EK If you’re open to learning and prove you’re capable, people will respect you and co-operate. If you’re not getting the desired response, remind them that everybody feels out of their depth in a new job.

MA Early on in my career, I had a job in which I wasn’t supported. But once I was brave enough to ask for help, I was joined by an experienced manager to help with the workload and act as a sounding board.

JH Don’t be afraid to point out weaknesses in another party’s position. As a project manager, you need to get things moving.

EK Unfortunately, there’s no sure way to avoid doing or saying something stupid.

EK Commanding respect after you’ve shown yourself up can be daunting but because they’re probably aware of your inexperience, they won’t judge you too harshly. Use the opportunity to show you can learn quickly. Chances are nobody will remember your mistake for long.