Arbitration is best for neighbourly disputes

Neighbours. Love ’em or hate ’em, surely it makes sense to take a dispute to arbitration rather than spend thousands thrashing it out in the courts?

This is a story about an old five foot-high brick wall between the back gardens of Mr and Mrs Stanley and Mr and Mrs Rawlinson. A part of it fell down during a night of heavy winds in October 2001. No problem really. It was the Stanleys’ wall. It fell onto the Stanleys’ side. Well, actually it’s not only a story about the wall. It’s also a story of how neighbours who had hitherto got on, fell out. Well, actually, it’s also a story of how the bitter feud became litigation, (all the way to the Court of Appeal) and how, I sadly admit, my professional business of litigation has produced a nightmare. I will also tell you how the feud could have been solved, easily, cheaply and for good.

So, the wind blew. The wall toppled. It was 150 years old. That was in 2001. Five years on the rubble lay there. Then the Stanleys asked a local builder for a price to rebuild the whole wall - £26,423 was the answer. There was a side remark from the local builder to the Stanleys. He thought earth had been piled up against the old wall on the Rawlinson’s side. Ah-ha! It was downhill from there.

Here we are, 10 years later, wall still not repaired, two trials, solicitors, barristers, experts taking different opinions, and four judges. A bitter quarrel, with folk living next door that no doubt despise and detest each other … and the expense is such that the wall could, by now, have been rebuilt six times over with the money spent fighting the case, said the Court of Appeal judge. And by the way, he also said that the appeal was hopeless.

The wind blew. The wall toppled. the Stanleys asked a local builder for a price. the builder thought earth had been piled up against the old wall on the Rawlinsons’ side. Ah-ha! It was down hill from there

This case has no quirky point of law or ifs and buts. No unfairness. No faux pas by the judges. Unsurprisingly the Stanleys went to a solicitor. The solicitor puts a point of view to the neighbour. He now goes to a solicitor. The accusation of piled earth is rejected. Both now engage expert construction folk to fathom the true cause. Expert opinion doesn’t come cheap. Nor does the lawyer’s time in assessing value and deciding what to recommend to their client. Can you hear the fee notes being prepared? Can you guess how long it takes before the wall repair cost is matched, then overtaken, by those legal fees? The Stanleys decide to sue. The Rawlinsons defend. Eventually it comes to trial. It takes three days. The barristers are thorough. The experts are cross-examined. The judge analyses the evidence, the circumstances, and decides the wall fell down … because of the wind, that’s all. Ordinarily that means disaster for the loser. They pay all their own costs and the costs of the other side.

But the Stanleys are not all done yet. Somehow they coax the three-man Court of Appeal to hear their case. I search for a point of law that the judge may have got wrong. Nothing. It is, for all purposes, a re-run. The Court of Appeal very thoroughly looks at all that happened all over again and emphatically dismisses the appeal. More and more expense for the Stanleys. By now I bet there is no money to rebuild the wall.

Now, don’t get me wrong. Disputes of £26,000 can contain fundamentally difficult concepts of law. A famous case called Ruxley vs Forsyth about the mistake of a few inches in a swimming pool depth went all the way to the House of Lords, using up the time ultimately of nine judges. But unlike this garden wall case, it contained a tricky legal point. This is a case driven by complete confidence that the neighbours have “dissimulated”, said the court. In other words disguised or concealed the truth. My guess is that the expense is fuelled by desire to win. And I tell you this, sometimes when you tell a client they are likely to lose … they are more likely to proceed. So this case has run all the way through litigation and is a disaster.

If, instead, the Stanleys and Rawlinsons had come to arbitration, using the special scheme talked about on this page last week, their maximum expense would have been £2,000 per party. No solicitors, no barristers, just the Stanleys and Rawlinsons. No experts, just an arbitrator who decides construction cases. No appeal. No dithering. Just a straight answer on the dispute … Win! Lose! All done.

And all done in time to get on with your life, even get back on terms with your neighbour, and enough money to rebuild the damn wall. 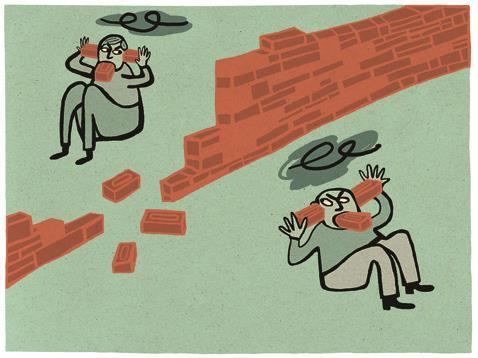