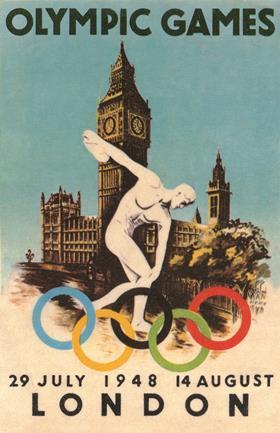 “Six thousand picked athletes representing sixty-one nations have come to London from all over the world to compete in the great Olympiad which His Majesty the King will declare open at Wembley on Thursday. After the nine o’clock news on Wednesday the Prime Minister will broadcast a message of welcome. Listeners will then hear a description of the scene at Dover earlier in the evening as the Mayor receives the Olympic Flame from a naval runner and the Vice-Lieutenant of Kent despatched it on the last stage of its journey to London. The flame, kindled at the little Greek village of Olympia, has been on its way across Europe since July 17, borne by relays of runner drawn from countries through which it has passed.

“The Home Service broadcast of the Opening Ceremony on Thursday will last for one-and-a-half hours. Wynford Vaughan Thomas will describe the scenes for listeners in Great Britain and overseas and other commentators will broadcast in forty different languages for audiences throughout the world. It is expected that 80,000 people will watch the athletes parade and see the lighting of the torch; but many more will view the scene by television.”