The Olympics: After the party's over

This year’s Olympics will not be the first time that London has hosted a global event of historic proportions, but what were the legacies of our previous efforts? Ike Ijeh tells a tale of grand museums, hallowed turfs and mass installation public toilets …

With the enormous emphasis that has been placed on regeneration, infrastructure renewal and the overall legacy of the 2012 Olympics, one might be forgiven for thinking that we were in the throes of a historic, unprecedented shift in the pattern of London’s urban development.

Historic, yes, unprecedented, no: London has seen this all before. By the end of the summer, the UK capital will be the only city in the world to have hosted three Olympic Games. Furthermore, although this year’s £9.3bn Games are by far the largest, most ambitious and most expensive of the trio, its predecessors proffered the same earnest promises of legacy that have been such a defining feature of London 2012.

Of course it will take years, perhaps decades, before the exact nature of London 2012’s legacy is known for certain. But as with so many things, clues to the future can often be found nestling in the past. London has a long history of hosting mega-events, of which the Olympics only forms one part.

Below are six of the biggest sporting, trade and cultural jamborees that have ever been held in the capital. The legacy left by each one provides a useful barometer of how London 2012 may shape our capital long into the future. 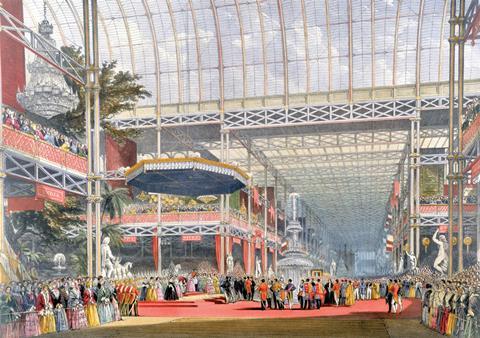 Purpose Groundbreaking international exhibition celebrating modern industrial technology and design. It was held in Hyde Park and conceived by Prince Albert and pre-eminent Victorian industrial designer and inventor of the Christmas card, Henry Cole. It symbolised the strength of Victorian industrial invention and cultural ambition.

Buildings The exhibition was held inside Joseph Paxton’s magnificent iron and glass hall, otherwise known as the Crystal Palace. This breathtaking structure was 564m long and 41m high and, with almost 1 million ft2 of glazing, contained more glass than had ever been used on a single building before. Inside, 14,000 exhibitors from around the world displayed their wares amid fountains, live trees and
1 million ft2 of exhibition space. The building cost £150,000 - around £17m today - to build.

Legacy Enormous. The myriad innovations the exhibition spawned that are still familiar to us today include a south London park and neighbourhood, the cultural institutions of South Kensington, mass installation public toilets, the concept of temporary and portable large-scale venues, the Commonwealth Games, the World Fairs of the late 19th century and the global trade expos that succeeded them and continue to this day. Prince Albert decreed that the £186,000 profit that the exhibition unexpectedly delivered be used to purchase lands for the “pursuit of arts and sciences” in nearby South Kensington - today, the area’s multiple museums and academies comprise one of the world’s foremost cultural neighbourhoods. The Crystal Palace was always designed to be temporary and its relocation to the south London suburb that eventually adopted its name led to the 1911 Festival of Empire, from
which the Commonwealth Games sprang. Despite the Crystal Palace burning down in 1936, the Great Exhibition was probably the most successful and influential exhibition event of all time.

Lesson for 2012 Think big, establish a clear legacy vision and plough any surpluses back into achieving it. 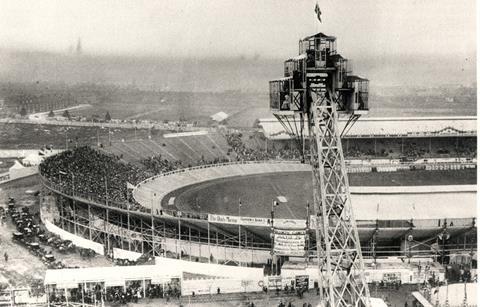 Purpose We were never supposed to host the 4th Olympiad, it was meant to be in Rome. But Mount Vesuvius erupted inconveniently in 1906 leaving the priorities of Italian authorities elsewhere. London stepped into the breach at the last moment.

Buildings Incredibly, the British Olympic Committee managed to harness national pride to convince the organisers of the concurrent Franco-British Exhibition to share their site and fund a new stadium on it. Constructed in just 10 months by George Wimpey for £75,000, it had a 68,000 seated capacity and room for 130,000 standing.

White City stadium fell into a long period of decline, during which it hosted events as diverse as boxing and speedway racing

Legacy The White City stadium is often considered the world’s first modern seater, multi-purpose stadium, as well as the first purpose-built Olympic stadium. In addition to track and field events, it included a cycle track beside the running track and infield swimming and diving pools. Despite this ingenuity, no plan for what the stadium was to be used for after the Olympics was ever devised. Therefore it subsequently fell into a long period of decline and sporadic use, during which it hosted events as diverse as boxing and speedway racing. It was eventually demolished in
1986 to make way for the expanded BBC White City campus.

Lesson for 2012 Fix the post-Olympic function of permanent venues (particularly the stadium) right from the start. 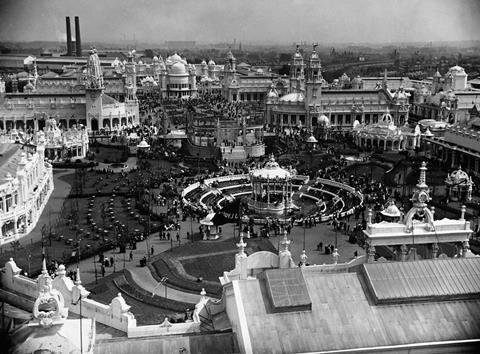 Purpose The largest public fair ever staged in Britain was designed as a cultural affirmation of the recent signing of the Entente Cordiale with France.

Buildings A spectacular array of buildings and landscapes was constructed on a 140-acre farmland site to the north of Shepherd’s Bush in west London. Some 170 exhibition halls, pavilions and kiosks were decked in a sumptuously theatrical assortment of highly ornamental architectural styles. These ranged from baroque to arabesque and were all designed to reflect the global reach of imperial influence. An astonishing network of formal gardens and waterways was also built, including a vast artificial lake.

Some 170 exhibition halls, pavilions and kiosks were decked in a sumptuously theatrical assortment of highly ornamental architectural styles

Legacy The exhibition’s resplendent white buildings eventually lent their name to the neighbourhood that now stands on the same site, White City. Sadly, nothing else of the exhibition remains, most of it was demolished in 1937 to make way for the current sprawling White City housing estate, and its final fragments were cleared with the construction of the Westfield London shopping centre in 2008. However, two railway stations built to serve the exhibition, Wood Lane and Shepherd’s Bush, have long
since been amalgamated into the London Underground network.

Lesson for 2012 No temporary organised spectacle is strong enough to maintain a permanent legacy unless the legacy is as planned as the event itself. 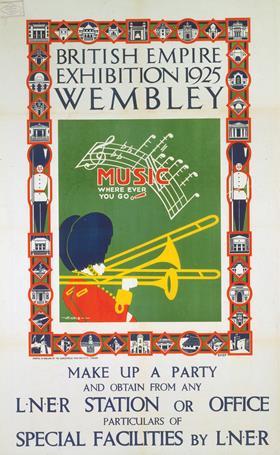 Buildings Three main buildings - the Palaces of Industry, Engineering and Arts - surrounded by a stadium and a sprawling flotilla of exhibition halls, pools and pavilions. Most were designed to be temporary. The Palace of Engineering was the largest reinforced concrete building in the world, an innovation that accelerated its construction but prolonged its demolition well into the seventies.

Wembley, the spiritual home of English football, was originally the British Empire Exhibition stadium. It was the first to earn the appendage ‘hallowed turf’

Legacy Wembley stadium. The spiritual home of English football was originally the British Empire Exhibition stadium before being saved and dedicated exclusively to football after the exhibition closed. It was the first stadium to earn the appendage “hallowed turf” and its famous twin towers became global icons of the “beautiful game”. Its £750,000 construction cost was, allowing for inflation, a 20th of the sum required to rebuild it in 2007.

No less useful but a good deal more prosaic was the new station and railway line built to serve Marylebone station, still in use today. Of the remainder of the exhibition, the Empire pool became Wembley arena and all that is left of the monumental bulk of the Palace of Industry has been converted into warehouses.

The exhibition was also the first event for which the Royal Mail issued commemorative stamps.

Lesson for 2012 Know your audience. Change drives progress but that doesn’t make tradition a dirty word. If legacy can be interwoven with something already popular and well-established (like football) then this could potentially secure its long-term future - even if that legacy is completely unrelated to the original event.

Purpose Convened by the Labour government to lift post-war spirits, celebrate British artistic and scientific prowess and herald the onset of a new Modern Age.

Buildings Although events were held nationwide, they were centred on a sparkling promenade of modernist architecture built on the south bank of the Thames. The site
had been badly bombed and was primarily occupied by disused warehouses and breweries. These were replaced by a futuristic assortment of structures and pleasure gardens including the Dome of Discovery and the Skylon. Churchill dismissed the festival as Labour pandering to the proletariat and ordered the immediate demolition of
most of the site when he was re-elected in the autumn. The Royal Festival Hall is all that remains of the original composition.

Legacy Practically every post-war arts-led regeneration project. The Millennium Dome was an extension, albeit a less successful one, of the concept of state-sponsored celebration; the London Eye reintroduces the spirit of riverside festivity abdicated by the Skylon; and the Tate Modern exploits cultural stimuli for urban improvement. The South Bank itself has proved to be a seminal template for urban regeneration and is today the largest sole-ownership arts centre in the world. Architecturally, it also stands as an enduring symbol of British post-war modernism.

Lesson for 2012 Culturally-led regeneration can be just as effective as commercially led examples and national events cannot succeed without political will. 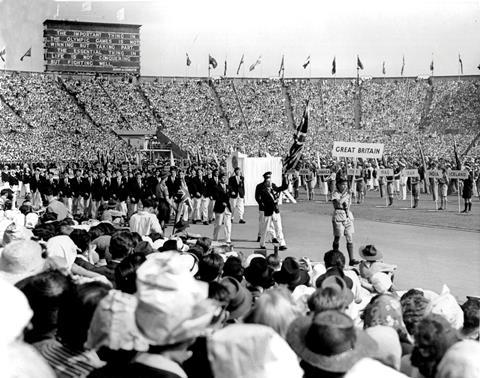 Purpose Once again, London was not scheduled to stage the 1948 Olympics. It had been provisionally awarded the 1944 Games but these, as with the 1940 Tokyo Olympics, had been cancelled due to the Second World War. Despite being dubbed the “Austerity Games” because of the straitened economic circumstances in which they were held, they were deemed a success and ensured the continuation of the modern Olympic tradition.

Buildings No new buildings were built for the games and athletes were housed in existing accommodation rather than an Olympic village. Several events took place in the British Empire Exhibition buildings at Wembley, their selection over the White City stadium already illustrating the latter’s diminishing importance.

Legacy The 1891 Herne Hill velodrome, one of the oldest cycling tracks in the world, is the last remaining 1948 Olympic venue. But the spirit of adaptation that saw many events take place in specially modified existing buildings lives on in London 2012 with the array of events being held in the venues such as the O2, Earls Court and Lord’s. One of the more powerful legacies of the 1948 Games is artistic. Its promotional poster depicting a discus thrower poised mid-launch before Big Ben has become a symbolic image of the Games. Such is its enduring power that it was recreated by a member of the Great Britain discus squad for London 2012 marketing.

Lesson for 2012 Austerity and adaptation can still bring success. And a simple, well-designed logo can become an enduring iconic image. Ahem.