Our business minister grapples with some paperwork, a Victorian refurb gets distressed (but in a good way), Google shows its true colours, and, as it’s almost Christmas, we contemplate nuclear extinction

Reading between the lines

To Nuclear 2018 being held last week in London’s Victoria. Business minister Richard Harrington, the man who popped into a Construction Leadership Council event in October for a whopping six minutes, stayed a bit longer this time. My hack reckons he was there for about 20 minutes, firing up attendees. “We were given [anti-nuclear] leaflets by a couple of very civilised protesters outside,” he remarked. “I’ve not read it but I’m sure it is full of inaccuracies and spelling mistakes.” My hack received one as well. The chief sub on this title says there’s not one typo and, as for inaccuracies, the leaflet takes a similar line to Sir John Armitt’s National Infrastructure Commission – that nuclear will ultimately cost taxpayers more than pursuing renewables. Not reading things seems to be Harrington’s forte. Over the summer, he told journalists at an FMB event he would only answer questions on the report the group had just produced – except he hadn’t read it. He’s fast shaping up to be a real asset for the industry.

Much of the nuclear conference entailed discussions about getting the private sector to take on more of the sector’s risk. “Very remote but high impact events can put the private sector at risk in terms of investments,” said Peter Hall, partner at law firm Norton Rose Fulbright. “For example, nuclear extinction – the consequences are very severe.” Severe indeed but I’m bothered by one thing: how much point is there insuring against extinction of any kind?

It’s all in the timing

HS2 has been running speed dating events to hook up local SMEs with the big contractors running the show. They’re given a few minutes each, with a giant clock on the wall timing each meeting. What on earth can they talk about, I wondered aloud? “How about ‘have you got the time?’” a colleague helpfully chipped in.

Gym life, but not as we know it

The well-heeled denizens of Highbury Fields are not overly burdened in life – a recent headline in the local Islington Gazette was typical: “Highbury Leisure Centre apologises for lack of shower gel after gym-goer warns: ‘This could end in disaster’.”  So when said centre burnt to the ground in September it was big news. This week the centre re-opened its doors just 12 weeks after the fire. The pool remains closed as parties squabble over who is to pay for its refurbishment but there is now, the centre boasts, “a fully-functional gym, changing rooms, sauna and steam room, fitness studios and hot showers”. Let’s just hope they’ve remembered the shower gel.

Willmott Dixon has been showing hacks around its completed work to refurbish a disused Victorian theatre at Alexandra Palace in north London. It’s been unused for 80 years and my colleagues tell me the refurbishment mimics some of the peeling paint and plaster when it was last used all those years ago. It’s called “arrested decay”, apparently. More cynical members of the public might call it “typical builders”.

The same day that Interserve announced it was in debt-for-equity talks, it revealed it has been awarded a £25m contract by Cwm Taf University Health Board, as part of the next phase of the £36m redevelopment of Prince Charles hospital in Merthyr, being funded by the Welsh government. Timing, as they say, is everything. 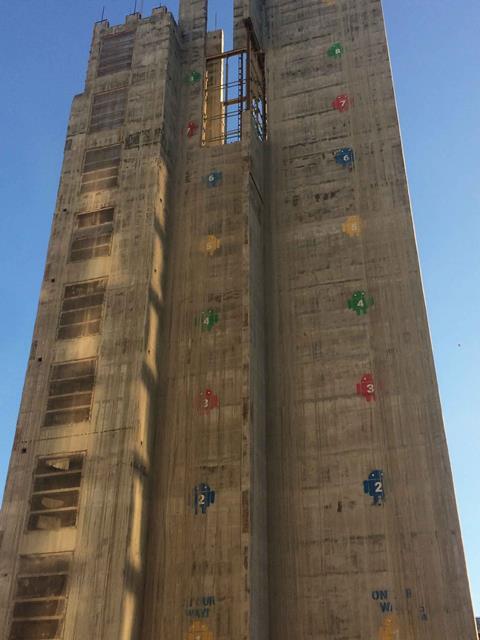 Just look it up

Lendlease is cracking on with Google’s new headquarters at King’s Cross in London. There’s still no indication to passers-by what the job is – instead they are having to make do with the rather baffling name of KGX1. The more eagle-eyed, however, might have noticed Google’s android symbol being stamped on the concrete cores in Google’s corporate colours that are going up at the site. It’s a sort of ongoing Google doodle.