Nobody could stay still this week – from flying visits to noble endeavours in the Shropshire hills, Spiderman-like feats of dexterity and a long day in Berlin – there was action everywhere, apart from around Crossrail…

The chairman of Hurley Palmer Flatt’s owner HDR was in London earlier this week to meet the team. Eric Keen, who is also chief executive of the US engineer, flew in from California on Monday before heading home to the firm’s HQ in Omaha, Nebraska, the following day. I think that’s a good example of where the phrase “flying visit” comes from.

Keen told my hack that he didn’t feel any tremors from last weekend’s earthquakes, which hit an area near Los Angeles. He was in northern California when they struck the state’s southern half, leaving thousands of people without power. But his son lives in LA and he certainly felt the shocks. “He told me things were rocking and rolling,” he laughs, shrugging off what no doubt would have taken us months to recover from in the UK …

In the spring, the London Assembly published a report on what has caused Crossrail to be delayed, dramatically named “Derailed: Getting Crossrail back on track”. Both Transport for London and London’s mayor Sadiq Khan promised to respond to it by June. In keeping with the theme of the railway, they haven’t.

Renewi seems to have thrown in the towel over its ability to hang on to a waste management contract it signed five years ago with councils in Derby. The waste-to-product business has told investors in its latest annual report that it’s blaming joint venture partner Interserve, which must wish it had never heard of energy-from-waste, for its impending Waterloo. Quite apt, then, that Renewi’s slogan is “Waste no more”.

As Brexit uncertainty tightens its vice-like grip on the construction industry, my hacks tell me that signs of penny-pinching are becoming more evident across the wider economy. Just this week, urban climber George King scaled the outside of London’s Shard tower – designed by Renzo Piano for Sellar Group and constructed by Mace. This death-defying act can, surely, only be seen as an attempt to avoid the £19.95 entry fee to the tower’s 72nd-floor viewing platform. I can’t think of any other reason for such lunacy.

Press junkets used to be leisurely affairs in my day but on a recent visit to see David Chipperfield’s new museum in Berlin, my writer had a different experience. The trip to see the James Simon Gallery began at 3.30am and finished nearly 20 hours later when he finally crawled home. Flight delays rather than the Chipperfield people putting hacks through their paces are being blamed.

One of my team spent last weekend cycling close to 200 miles and climbing 16,000ft in Shropshire and Wales as part of an annual ride to raise money for charity Whittington Babies. He’s needed daily ice baths since. But it’s all for a good cause as the charity raises money for the neonatal – baby A&E – unit of the Whittington hospital in north London. “They’re a tiny little charity, all parents of kids who’ve been on the ward,” says deputy editor Dave Rogers. Donations to this year’s event can be made at www.justgiving.com/fundraising/jasminsjourney2019. 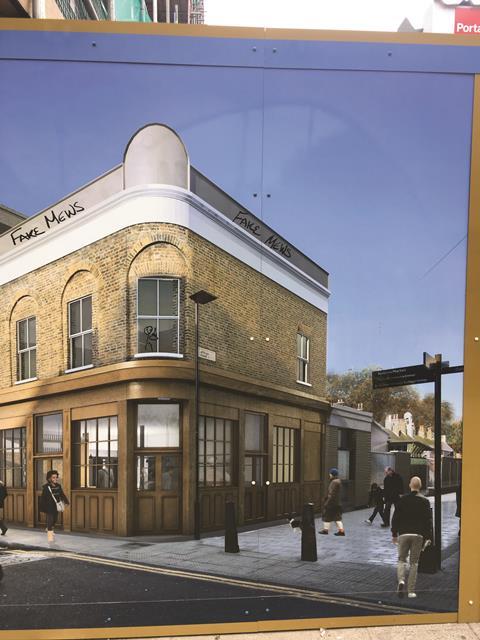 Seems like someone isn’t too impressed with Jerram Developments’ scheme to build eight apartments next door to the Geffrye Museum in east London. “The development seamlessly blends old with new,” trumpets the marketing blurb. Not everyone agrees. But this being trendy Hoxton, registering disapproval is more artfully done through the elegant medium of marker pen graffiti on the site hoardings…