Litigation: The long and short of it

Eternity is very long, said Woody Allen - especially towards the end. Here’s a case that proves the point

If there was one compelling reason why we got adjudication in construction contracts 13 years ago, it’s that litigation was hopeless. Has anything changed? NAP Anglia Ltd agreed to construct four houses for Sun-Land Development Co Ltd for £728,000. Standard Form CIOB contract document. It requires a contract administrator to issue certificates including money due. Certificate 16 said a net £106k was due. But Sun-Land didn’t pay. So the builder terminated the contract. Still no money. So the builder sued Sun-Land in the county court.

The action has not moved swiftly, to say the least. It took two years to come to trial. At the end of day five last November, the court pressed the pause button. It was the following February that they all got weaving again; this time for another three days. Then paused again. Another three days was in June. Still not done; it was listed for a final three days in October. That amounts to 14 court days for this final account dispute for a handful of houses. I dread to think about the legal expenses.

The High Court judge in this case has done a lot of adjudication enforcement cases. He was very patient. He gave the argument careful analysis. Then threw it out. ‘Clutching at straws’ is not what he said. I do

Meanwhile the builder lost patience with the court. He brought exactly the same dispute to an adjudicator while the litigation rumbled on and on. So the litigation and adjudication was concurrent - the Construction Act allows adjudication “at any time” for an undecided dispute. It was all over in 42 days flat. The adjudicator awarded the money to be paid to the builder. The decision is binding until finally decided in that ambling litigation.

Sun-Land still didn’t put its hand in its pocket. It opened a second war front. It said the adjudicator did not play fair and therefore his decision was not enforceable and even if it was, Sun-Land required a stay of payment until the litigation was all done since it feared that NAP would not be able to re-pay the cash once the court reversed the adjudicator. Perhaps Sun-Land has an appetite for all this court stuff, and a pocket to suit. Meanwhile, by the way, the county court judge hearing the trial said it will be next year 2012 before this affair is all done. Oh, dear.

The enforcement issue is being heard in the High Court; quite different to the county court hearing the litigation. As to the reason why Sun-Land says it shouldn’t honour the adjudicator’s award, it says the timetable in the adjudication was unfairly set by the adjudicator. It complained that the builder had unlimited time to get his ducks in a row … endless time to prepare his story (called the referral) while the respondent only had 21 days to prepare his response. Then the builder was given nine days to serve a reply to the response. Then Sun-Land had seven days to reply. Then NAP was allowed the final word. The argument advanced for Sun-Land was that the referring party was at a tactical advantage, meaning there was an unfair distribution of the amount of time available for making submissions. The High Court judge in this case has done a lot of adjudication enforcement cases. He was very patient. He gave the argument careful analysis. Then threw it out. “Clutching at straws” is not what he said. I do. Folk sometimes complain that they have been ambushed by an adjudication. “The other bloke has prepared his case at leisure.” Oh, come on! Almost always both parties are well aware that there is a row going on about the account.

One side at least is bellowing about his grievance while the other side has happily got his eyes wide shut and his ear flaps closed. The dispute is brewing; don’t whinge when an adjudication notice lands on your desk. The whinge carries no weight.

The dispute is brewing; don’t whinge when an adjudication notice lands on your desk. The whinge carries no weight

As to the attempt to persuade the High Court judge to stay or block payment until the litigation finally decides the quarrels about the final account; that was partly thrown out. True, the builder was in a less healthy financial position than when he began the work five years ago. The adjudicator had awarded £100,000. The judge weighed the builder’s financial state and decided that £65,000 ought to be paid while pausing the balance over that amount.

So, it was worthwhile for the builder to press the adjudication button while the litigation was afoot. The whole point of adjudication is to ask who will hold the money pending a final decision in court or arbitration. As to the litigation taking far too long, I don’t know why but I do know these time scales are out of the ordinary by miles. 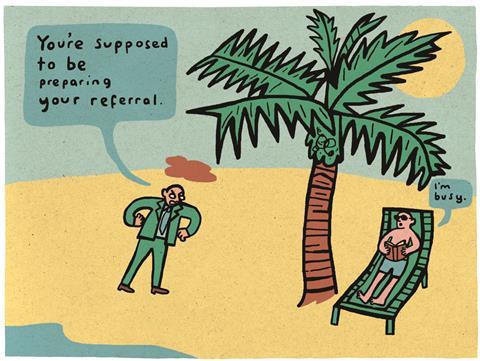