The winners of this prestigious prize have some clever things to say about delays and quantum meruit disputes. Their papers are all must-reads

This year, the Society of Construction Law’s (SCL) essay competition was won by two papers. Aidan Steensma, a solicitor at CMS Cameron McKenna in London, won for a paper called Implied Obligations of Non-hindrance and Co-operation in Construction Contracts.

He shared the prize with Mathew Stulic, a solicitor at Clayton UTZ in Sydney, Australia, who wrote Prevention and the Allocation of the Risk of Project Delays: Evaluation or Revolution? Get them from the SCL website. There was a great runner-up too - Contract: What Contract? by Trevor Thomas, also of Clayton UTZ in Sydney. So easy to read, mate.

Join the SCL. It does nothing except get folk to give a talk, a paper, mull over construction law. It’s £100 a year and no exams, no politics. great

Before I tell you more about the papers, let me coax you to join the SCL. It’s the best “something” I’ve ever joined. It does nothing, except get folk to give a talk, a paper, express a view, mull over construction law. Yes, there are lots of lawyers but also architects, engineers, surveyors, contractors, developers, arbitrators, adjudicators and mediators. Real people. It’s £100 a year and no exams, no politics, no silly rules, no bullying, no disciplinary tosh, no royal charter to be poked in the eye with. Great.

Mr Steensma talks about claims for loss and expenses on building contracts and subcontracts. Even when there is an express right in the contract to make a claim and often when the document is silent, there is a delicate set of rules called implied terms to be argued about. All my plasterer friends will be reaching for this superb guidance; adjudicators, too. A contract has to contain a promise - including silent promises - before a claim can be made.

The snag is that a delay can be caused by differing reasons, some subtle. So, if I coax you to agree in the contract to “no guarantee of continuous work”, how brutal is that?

What is implied? Does it mean I can get you to come and go when I choose? Does it mean once I get you on site, I can get in your way? Does it mean I need not worry if a lack of detail from me stops you in your tracks? Steensma talks about a “non-hindrance” term, a “co-operation” term and an “information” term. Phew! 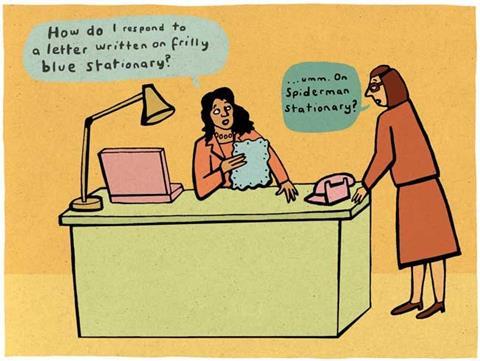 Mr Stulic did not write any of that like that. He talked about how non-compliance breaks the causal link between the employer’s act of prevention and the contractor’s liability for liquidated damages. No frills. He debates whether rules in these contract documents are mandatory or merely discretionary. It’s all about delicate nuances put on words and phrases. It’s about movements in recent English case law.

Since some English cases are cited in Australian cases, there are lots of ifs and buts. On balance, the evolution is that a willingness to move towards non-compliance with mandatory clauses will exclude the extension of time. If that is the direction it goes, this paper says it would represent a new path and a higher risk profile for contractors. In other words, buy frilly pink paper.

Contract: What Contract? by Trevor Thomas is familiar territory. Consider the following scenario, he says. The customer and contractor are busy negotiating and while they do this, they make a start on site. The negotiations drag on and the works are being built. Nobody yet has agreed the contract completion date. Yet the machinery in the contract is operated as though it has all been agreed. Then they all fall out. And the lawyers fall in. In the dispute, one side will invariably claim “no contract” and seek to pay on a quantum meruit basis instead of the sums bandied around in the negotiations. Then the delicate arguments begin to explore if a complete deal was done to satisfy offer and acceptance rules. If not, the arguments will go to estoppel by convention. Ah, said my plasterer, now we are in business. He put down his pick and shovel, put his law books in his hod and waved TTFN. My Aussie friends know what that means.

Tony Bingham is a barrister and arbitrator at 3 Paper Buildings