The bad side of good faith clauses

‘Good faith’ clauses might sound like a bit of modern touchy-feeliness, but they carry a real sting if you fail to heed them

These long-term facilities contracts have a horrible habit of soon going to hell in a handcart. This one has. It took just 18 months for the marriage machinery to lead to a “poisoning of the relationship” and both dump each other. One of the marriage vows in the 10-year utilities contract talked about giving each other lots of hugging and cuddling.

It said: “The (employer) and contractor will co-operate with each other in good faith… and… will take all reasonable action as is necessary for the efficient transmission of information and instructions and to enable the employer or, as the case may be, any beneficiary to derive the full benefit of the contract.”

I heard myself mutter “elephants”. It’s an elephant clause… the elephant is difficult to describe in words, but you as sure as hell will recognise it when you see it. Now then, these clauses are found not only in long-term, five, seven, 10 and 30-year service contract deals but have crept into very ordinary building contracts.

The case I will tell you about applies full tilt to our building world but is all about grub. One of the Compass UK companies, Medirest, bid and won the 10-year catering contract for two hospitals in Essex as a Private Finance Initiative. They soon ended up in court and the judge was a tad uncomplimentary about the behaviour of the employer (Mid Essex Hospital Services) because they didn’t understand what behaviour applies when all this tree-hugging good faith thingamijig is a clause in the contract. Do you?

The judge didn’t understand what behaviour applies when all this good faith thingamajig is a clause in the contract. do you?

The contract was worth £2 million a year. It had monthly interim payments. It also talked about deductions of cash for performance failures. So the customer levied the utilities contractor with lumps of cash discounts. I expect you can see what’s coming. The contractor and employer quarrelled about these deductions. There was a subtle point; it concerns this good faith concept, this “mutual trust and co-operation”. The contract was poisoned (the judge’s word) by the way the employer treated the contractor.

Let’s have a look at this treatment, this behaviour towards the other person in the relationship. The contract, with its performance points and money deductions, was quite clever. It was invented by the employer’s commercial director. I think he was quite proud of the machinery. Within a week of beginning the 10-year relationship he had the contract on his desk since he said with some accurate prescience this relationship “could get contractual”. He already wanted to read the riot act.

The cash deductions were, in the beginning, tiny. One month came to only £3,570. Not many months later it was a whopping total of £716,197! The contractor’s calculation was a mere £37k. The lawyers now come on board. They said, and the eventual court case heard the judge agree, that the employer’s £716k claim was absurd. Moreover, when the contractor protested, the employer “failed to respond positively”. The employer had given no details on how the £716k was calculated. It turns out that the employer had not checked whether their claims were accurate. The motive for them is put rather politely by the judge… the intention was to encourage a debate (about service) and perhaps a proper engagement on the contractors’ part.

The judge concluded that the absurdity of the calculations for payment was a breach of good faith; a poisoning of the relationship

Do you recognise this sort of behaviour? The treatment was all about crucifying the cash flow to persuade the contractor to do what the other fellow wanted. The judge concluded that the absurdity of the calculations for payment was a breach of the requirement of good faith; there was a poisoning of the relationship.

All this went to the heart of the contract. Enough to quit. You may recognise this sort of treatment by one party of the other in our world of building construction but there are numerous occasions when there is an ordinary duty to play fair. And it is a two-way street. It’s not just the behaviour of the employer or his architect, engineer, surveyor; it’s the behaviour too of the contractor. Making claims by anyone which are false or even slap-dash is often regarded as par for the course. It’s not. It’s bad faith. Watch out for the consequences.
Tony Bingham is a barrister and arbitrator at 3 Paper Buildings, Temple 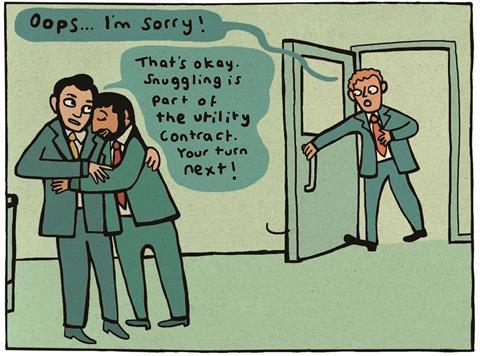