A lot of people say a clause in the new Construction Act approves the pre-dispute allocation of legal costs - the opposite of what was intended. Let’s get it sorted

An awfully big cat has just jumped out of an awfully big bag. No, it hasn’t, says the Department for Business, Innovation and Skills. Oh, I do hope this row is confusing, ambiguous, uncommercial and lacks common sense.

It’s all to do with adjudicating and all to do with both the old Construction Act and the new one coming to your town soon, and all to do with a clause in a payer’s main contract, which parliament found repugnant. Put simply, the payer puts in his contract a lump of small print which says: “If you take any future dispute to an adjudicator, you will pay my legal costs and yours, win or lose.” And the whole idea is that the subbie is deemed to have said: “Yes, yes, that’s agreed.” He hasn’t said that, of course; he is not that daft. But the law will imply the “yes, yes” simply because he got on with the job.

Lawyers wrote to the construction minister to argue that the words in the act say precisely the opposite of what they wanted. But the business department pooh-poohs the notion of cock-up

Anyway, parliament decided that it was time to carry out a servicing and repair job on the original Construction Act of 1996. That was in 2004. It consulted far and wide and the revised act is due to hit the streets come October. Seven years! One consideration the consultation proposed to our construction world was this: “Any agreement concerning the allocation of legal costs will be ineffective unless such agreement is made after a dispute has arisen and after the notice of adjudication is given.” Thumbs up, said the industry. The snag came when the parliamentary draftsmen cobbled together what we call the section 108A cost allocation clause. I won’t trouble you with the actual words, but they squeezed past the politicians and the industry and became law. Nobody meant to muck things up.

Last week a Scottish judge in a case called Profile Projects vs Elmwood (Glasgow), said that the new words and the new Construction Act have done the very opposite to what parliament intended. The judge says that parliament approves, yes, approves a clause in a contract, pre-dispute, pre-notice of adjudication, which nails the cost allocation flag to the payee’s mast. The payee gets lumbered with the payer’s legal costs. But the business department says that’s not what the act encourages. True, it allows the barmy agreement after the adjudication begins, but to suggest the payee is so barmy to agree to pay the payer’s legal costs is, well, barmy.

So, a lot of important people from the construction legal world have looked at this section 108A. Then they wrote to the construction minister at the business department and argued that the words in the act say precisely the opposite of what they had all said they wanted in the consultation. But the business department - and probably the parliamentary draftsmen who invented the words - pooh-poohs the notion of cock-up. Let’s hope that we can at least say the clause is ambiguous.

In short, the payee gets lumbered with the payer’s legal costs - but to suggest the payee is so barmy to agree all that is, well, barmy

Now what? Well, there is an odd rule of law. In 1992, the House of Lords ruled that where primary legislation is ambiguous then, under certain circumstances, in trying to understand what the words mean the court may refer to statements made in parliament when the legislation was being invented.

And what will they find? Oh, they will find that parliament absolutely condemned the pre-dispute allocation of legal costs on one pair of shoulders. But I have a better idea.

The usual route to find out what the courts think is to bring a dispute first to adjudication. There the effect of this allocation of legal costs will be argued. Then it will come to the High Court for a senior judge to pronounce on the new clause. In other words a whole bag full of cash is spent on the adjudication, then the High Court, to get an answer. It may even go up to the Court of Appeal. Don’t do any of that. Instead let’s have the construction minister, Mark Prisk, refuse to bring into force, or bring in and immediately rescind, section 108A, while we have another go at drafting. But if Mark Prisk won’t play ball, let’s bring the clause to the High Court for what is called early neutral evaluation. Put it squarely to the senior judge for his non-binding view. And if he says it fails to bar the barmy clause, well, the business department can cram the cat back in the bag by revising it. Easy. 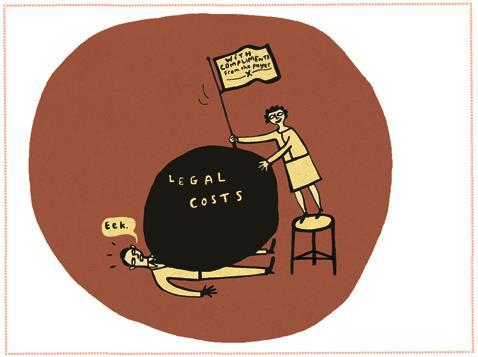