Frolics. Odd isn’t it. We spend years trying to put into effect a dispute management system that is cheap, easy and successful - 28-day adjudication. Then spend years (13, actually) trying to find an angle to make it ineffective. No, that’s not because it isn’t a success, it is a runaway success; we are trying to torpedo it because, well, er, lawyers do that sort of thing. Frolics. The attack on the adjudication result this time is to accuse the adjudicator of amusing himself, going on a trip of his own, a romp, a caper, or, as the Scottish judge said, “a forensic frolic of his own”.

Let me take you back to the early days of adjudication. None of us really knew what to make of it. Some adjudicators took the view that it didn’t matter what the two parties put up by way of argument

Let me tell you the story. It’s a tiddler of a project. Mr and Mrs Paton contracted with builder Douglas Jamie to build a traditional house. The JCT contract has the 28-day adjudication machinery if there is a dispute. There is. Instead of finishing on 31 May, it was practically complete on 12 December. The builder held his hand out for an extension of time to actual completion. The architect only awarded eight weeks. The adjudicator was called up and he awarded a full extension of time to 12 December. He also awarded £29,000 compensation to the builder for those delays. Mr and Mrs Paton grumbled. They said that the adjudicator had deprived the parties of a chance to argue and that was an unfair piece of tomfoolery. So on 1 March 2011, they invested in a High Court action in Edinburgh.

Let me take you back to the early days of adjudication. None of us really knew what to make of it. Some adjudicators took the view that it didn’t matter what the two parties put up by way of argument in the adjudication - it was open to the adjudicator to think of his own arguments and make an award on that. The excuse for taking that approach was the 28-day mad dash. It was a sort of: “I know what I’m doing, like it or lump it”. In one case, the adjudicator put a team of people on a computer driven delay analysis critical path thingy, because no one else had. The adjudicator actually was/is a first class delay analyst, up to his neck in software. So he showed off his top dog know-how, except that nobody knew what he was doing until the loser saw the award. Now that’s what we call “a forensic frolic of his own”. Got it? 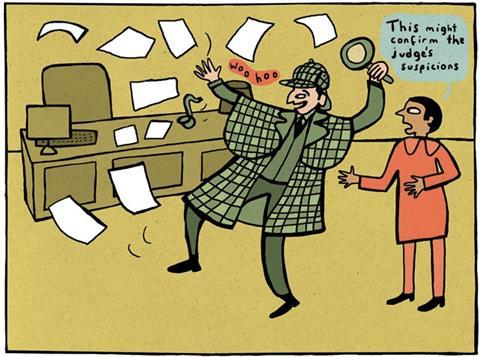 The lawyers for Mr and Mrs Paton sniffed a similarity with our old case. Notwithstanding the tiny monies involved they took a fair punt on the frolics argument. Surprisingly, the adjudicator was called to give evidence on how and what he did when deciding the revised extension of time. He was cross-examined. Critical path analysis? No need. Fathomed which delays were critical? Yes, by experience and by eye. Logic links? No … just rule of thumb. Amount of time extension? By “informed guess”. I bet the lawyers for Mr and Mrs Paton were thrilled skinny with all these answers.

The learned judge gave the argument no houseroom. Can you see the difference between the case all those years ago and this one? Easy, really. The later adjudicator was doing the very opposite to the first. The first fellow compiled his own case afresh, because he thought the case put by one of the parties was half-baked and would fail. He knew how to argue the case properly. This latest adjudicator instead was casting an eye, ruling by thumb and making informed guesses about the information put in front of him. It’s as though one of the parties shouted: “What do you think of the show so far?” And the adjudicator shouted back: “Rubbish!”

The job of the adjudicator is to provide a quick answer, but the quick answer has been subordinated to the need to have the right answer. That is what the judiciary says. The 28-day adjudicator is not to act as might an arbitrator or a judge. The 28-day adjudicator is there to use his own knowledge and experience when examining the materials put before him, not to tell the parties what he is thinking about the materials on his way to making his award, even if he disagrees with both parties and arrives at an intermediate position. But, if he does have a significant bright idea - not advanced by the parties - and intends to use it, then and only then must he put it to the parties.

No frolics here. The adjudicator knows his stuff and did it all right. The award was enforced.