Activity on site has slowed compared with the first quarter, while the election result has provided no assistance 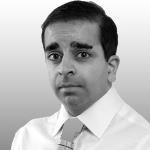 The momentum in construction appears to have shifted recently and activity on site has clearly slowed compared with the first quarter. The election won’t have helped as it has just created more uncertainty and clearly the issues around the tragic events at the Grenfell Tower have also darkened the mood.

In the UK economy, although the unemployment rate is at historic lows, real wages are falling and this will undoubtedly hit consumer spending, which is the key driver of economic growth.

Within the construction industry, margins have been hit by rising costs due to both shortages of skills in many areas and materials price inflation, in turn due to the depreciations in sterling post-referendum, in the second half of 2016. It is too early to suggest that sharp falls in construction activity are likely in the second half of this year but the CPA/Barbour ABI index of contract awards in June was 2% lower than a year ago and this is likely to feed through on the ground.

It is hard to discern if we’re now at a turning point for private housebuilding, following many years of growth boosted by low interest rates, Help to Buy equity loans and dozens of other government policies. The key concern is that demand in the general housing market has slowed, highlighted by small falls in mortgage approvals, property transactions and house prices. Furthermore, on the supply side, a lack of skilled trades and site managers has led to labour costs in construction rising at double the rate for the UK economy as a whole.

Rising labour and materials costs have hit margins and given the importance of margins to housebuilders, we have also started to see new contract awards plateau. The CPA/Barbour ABI private housing index was 1% lower than in May and flat compared with a year ago.