This year’s Building/Hays Construction & Property pay guide tells a familiar story of cuts and freezes. Roxane McMeeken finds out who’s getting by on economy baked beans, and why employers might be about to get a lot of belly aching

Andy was made redundant from a medium-sized QS in September 2008. He says: “My company was working on about 11 commercial projects in the City of London and they all just disappeared. I got the bare minimum pay-off because the company had completely run out of money.” Andy, who has a wife and two young children, was relatively lucky: he managed to get a job two months later. Unfortunately, the salary for the new job was about 20% less than he had been taking home for the previous four years. Then, just three weeks into the new job, as he was trying to adjust to 80% of what he had before, his new employer brought in a 10% pay cut. Unfortunately his wife, who also works in construction, was pregnant at the time; she was also made redundant and has remained unemployed.

Andy, not his real name, says: “It feels like we’ve taken the full brunt of what’s happened to the industry. You have to sit and really look at your lifestyle and make drastic cutbacks. I used to go to Ireland, where my parents live, every year, but that’s had to stop. We buy the supermarket’s budget range and life is just that bit less comfortable.” But with salary cuts so widespread among consultancies in the industry, does he blame his employer for his situation? “I’m keeping quiet for now because there’s not much I can do but I feel no loyalty to them after what they’ve done. As soon as I see a good job elsewhere, I’ll be off.”

Employers should take note, because Andy is one of thousands of consultants in the same boat, and the recession in the labour market shows no sign of abating. The Construction Products Association is forecasting a 3% fall in activity in 2010, which is better than last year’s 12% slump but not exactly healthy. This year’s Building/Hays salary guide shows just how weak the demand for staff is: some salaries are unchanged, but most have gone down.

The annual survey, compiled exclusively for Building, is based on pay for jobs filled in the past year but Hays has also interviewed consultants who have not moved jobs. It has found that 52% of these have had their salaries reduced - and there is no sign that pay will rise any time soon. Gareth Broadrick, senior business manager at Hays in London, says: “There is not a huge amount happening. Until there is, nobody is going to reinstate salaries or go on big recruitment drives.”

QSs and architects take a hit

Just like last year, QSs and architects have suffered the largest drops in salaries. Our table of biggest losers and winners (page 43) shows that interior designers across the country are being paid 18.8% less than they were 12 months ago, and part one architectural assistants have had 11.8% slashed off their average salary. Broadrick says that, like last year, “those who do their work at the start of a building project are needed least right now”.

Comparing the detailed tables on the following pages with last year’s (see www.building.co.uk), it’s clear that, if you’re a QS, your salary cut depends on where you work. For example, one of the most pronounced falls in pay is for partners or directors in the South-west: their average salary has tumbled from £57,500 to £49,000. Those in London and the South-east have pretty much held their own.

Newly qualified surveyors are another unlucky group: salaries in most regions have dipped by £1,000 or so. In the North-west, the average salary has slipped from £28,000 to £25,000. Broadrick says lack of demand is a factor here, too, but adds that some QSs were overpaid. “The skills shortage before the recession meant that there were a lot of average QSs being paid an awful lot of money,” he says.

Interestingly, claims surveyors’ salaries are holding up well. In central London, they have even increased £3,000 to £63,000. These professionals are in demand as disputes rise and cash-strapped firms fight for every penny they are owed - or think they can get.

Architects are also big losers in the regional tables, with many pay packets falling by £5,000. The average pay for an associate in Wales has dropped from £35,000 a year ago to £30,000 and part one architectural assistants in Northern Ireland can now expect to earn an average of £17,000, down from £22,000.

Consultants in central London have been spared the most savage cuts, as you would expect, although most salaries have dropped by a thousand or two or remained static. The exception is building surveyors - average pay for partners or directors has leaped £8,000 to £63,000 while associates have had a £5,000 rise to £50,000. Broadrick says: “Building surveyors’ salaries have held firm or have increased because they work on existing buildings. It’s people involved in new construction that are suffering.”

And people are suffering whether they have changed jobs or not. Salary cuts and shorter working weeks have been imposed on existing staff by many consultancies in the past 18 months. Davis Langdon, for example, has cut salaries by up to 14% and Cyril Sweett by 8-10%. When the cuts were announced there was a suggestion that salaries could be reinstated - and in some cases the sacrificed money repaid - a year later. There is no indication that any firms are ready to do that yet.

Richard Steer, managing partner in Gleeds, which cut remuneration 12.5% in March 2009, says: “Our salaries have not been reinstated and I expect them to remain static for the next year or two. As long as the market is down, salaries will be down. I also expect further redundancies across the industry as big projects come to an end.”

When salaries were reduced, employees may have taken the view that they were simply lucky to have a job - but their goodwill could run out. After all, not everyone has imposed pay cuts and there is talk of some firms quietly increasing pay for chosen staff. As a result, Ed Hoad, director of recruitment agent Catalyst, says: “People are realising they could get a better deal elsewhere and that is sparking discontent, especially now that a few opportunities are emerging and people like myself are calling people up and saying, ’I’ve got a job for you’.”

This situation is worsened, according to Hoad, by lack of communication from senior management. “Firms discussed the cuts with staff when they were brought in. There was anger but also a degree of understanding. But since then there has been a lack of communication between bosses and staff and that is starting to grate.”

The consequence, Hoad warns, is that one or two departures from a firm could unsettle other employees - alerting them to vacancies elsewhere. “The fickle equilibrium we have at the moment means it won’t take many people moving to spark a landslide.” He believes there could be a 25-30% churn rate in the industry in the next 12 months. This will be a particular problem for smaller firms when the upturn comes. One senior manager at a 100-strong consultancy says: “We know that with the first sniff of a recovery, people may leave us. It will be hard to compete if the big consultants start recruiting.”

Hoad warns that if a recruitment landslide were to happen, it would be costly for consultants. “If you have to replace people leaving you may have to pay 10-20% of their annual salary to a recruitment agency, and you’ll have to add 10% to the salary of the person who left just to make the job attractive, and you also lose the knowledge and client contacts.”

When you add up that lot “it would be much cheaper to reinstate salary cuts of 10% than have to recruit - which could add 25-30% to your cost per person”.

But if employers can’t afford to return salaries to previous levels, what else can they do to retain staff? Gleeds treats its people to five-a-side football tournaments and the odd sailing trip. “We try to find ways to make people happy to work for us,” says Steer.

Architect Taylor Young, meanwhile, has given staff extra holidays and reinstated a sports and social club that it cut earlier on in the recession. Stephen Gleave, managing director of Taylor Young, says: “It’s just things to keep them smiling.”

These are good gestures but there are unlikely to fully make up for life on a diminished salary, which means employees like Andy may change job as soon as the opportunity arises.

So here’s what we all want to know: when will salaries rise? Broadrick says: “It all depends on when the banks decide to start spending again. Things might get going by early next spring when we’ll have fit-outs on the Olympic site happening and the Shard will be well under way. But next year will certainly not be a fantastic year.”

Hoad says: “Salaries have to go up again. It’s just a case of weathering the storm - and the storm hasn’t blown out yet.” 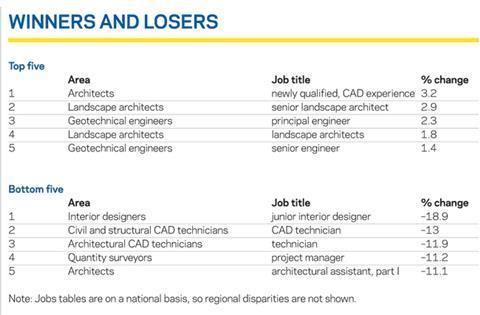 What else the Hays survey found

The recession has taken its toll on benefits as well as salaries: 46% of professionals surveyed said they had accepted reduced benefits over the past 12 months. Consultants said the most important benefits when deciding whether to take a job were a minimum of 25 days’ annual leave (67%), an element of flexible working (66%), a pension (64%) and a bonus (59%).

More than half (58%) of employers reported an increase in the number of speculative applications in the past six months. Despite this, many employers felt that unrealistic salary requirements (58%) and a shortage of experienced applicants (48%) would cause problems when recruiting over the coming year. A quarter of employers felt the quality of applications had decreased over the past six months.

Hays Construction & Property, which recruits staff to the built environment, consulted candidates, clients and its recruiting experts to compile this survey. The salary data is based on candidates placed within the past 12 months, compiled by staff at offices across the UK and uses data provided by clients and candidates in April 2010.