The ‘performance gap’ between the design of new homes and their as-built energy use can no longer be ignored. And according to the Zero Carbon Hub, the only answer is to fundamentally shake up the way that the industry works 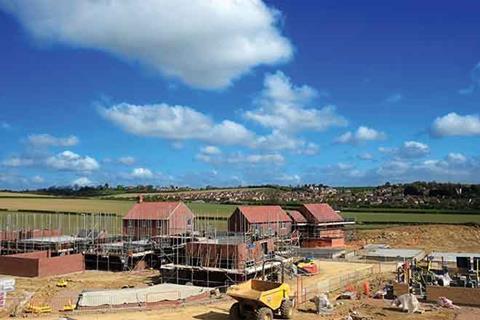 Nothing less than a cultural revolution for the construction industry: that’s the scale of the task sketched out in a report published this week by the Zero Carbon Hub.

The study has been drawn up to address what is known as the performance gap - the gap between how a building is designed to behave, and how it performs in cold reality. This gap, the report finds, is bedevilling efforts to meet the UK government’s target for new-build housing to generate no net carbon emissions by 2016.

The End of Term Performance Gap report is the fruit of a year-and-a-half-long probe by the Hub, the not-for-profit body set up six years ago to help implement the 2016 goal. The organisation set up a series of industry expert working groups to examine the various reasons why the energy performance of new homes turns out to be less glowing than the designs envisage.

And while the report is couched in technical language, the conclusion is a stark one: collectively, the industry is not delivering the homes its designers claim it is. “Ultimately,” it says, “a cultural shift in awareness of energy performance is needed, similar to the changes in health and safety that have already occurred in the construction industry.” So where are the problems, and what can be done?

Tucked away in the report’s appendix is the reason why action is needed. The Hub carried out a study of nearly two-dozen housing construction sites to assess how the industry’s low-carbon vision is translating into bricks and mortar.The assessment of 21 sites, covering just over 200 plots, showed “widespread” shortfalls in the “as built” performance of the stock.

Adam Mactavish, operations director at Sweett Group, was commissioned by the Hub to cost the performance gaps identified by its researchers. He gives one glaring example of the errors that can undermine a home’s performance. The report found many windows were being installed without the right amount of overlap with the “closers” which seal up cavity walls, leading to greater heat loss. “This is on 100% of sites we looked at, the windows were put in the wrong place, which is a simple, straightforward thing to put right but it’s never picked up. Nobody failed buildings regulations because the assessor didn’t know to look where the windows were meant to be.”

Other examples that arose on nearly all of the sites surveyed included insulation that had been poorly fitted and incorrect measurements.

For John Tebbit, managing director of Robust Details, the regulatory compliance organisation, the research results show that the debate over the existence of the performance gap is over. “It’s time to stop arguing about whether there is a performance gap, the evidence is that there is a gap and although there is debate on how big it is, it is clear that there are discrepancies all of the way through the process between what we are doing and what we say we are doing

The report warns that the gap in performance will undermine the new-build housing sector’s contribution to the government’s national carbon reduction plan to cut carbon emissions by a third on 1990 levels by 2020.

David Adams, technical director at Willmott Dixon Energy Services, agrees: “We know our buildings are not doing what the designs say they should - the policy is intended quite clearly to deliver, not theoretically deliver.”

It’s easy therefore to see why the government should be keen on tackling the performance gap issue. However, as the report acknowledges, the size of the gap cannot be quantified, partly because there is no clear agreement on how performance can be measured. “Existing techniques to measure as-built performance are not fully developed and tend to be expensive and disruptive of the build process,” it says.

Adams says: “We don’t know how big the gap is that we are seeking to narrow, let alone how we can demonstrate that we get there.”

The development of better testing, measuring and assessment techniques is “urgently required” to implement the Hub’s 2020 target to ensure at least 90% of new homes meet their designed energy performance, the report recommends. The report says the Standard Assessment Procedure (SAP), which is used to check compliance with Part L, the building regulation that deals with energy efficiency, should be refined in a bid to promote greater accuracy.

But perhaps the biggest issue underlying poor performance is the fragmented nature of the UK’s housebuilding process. The Hub’s survey of sites showed that performance problems were often due to breakdowns in supply chain communication.

Sustainable architecture expert Bill Gething, who chaired the concept design working group, says: “There has been a culture of people doing their own job and not worrying about anybody else’s. [But] people need to know enough about others’ trades not to bugger up their work.” As an example, he points to plumbers rupturing sealed-air barriers by knocking holes in walls.

This is why the study’s authors believe changing the industry’s culture is so key to closing the performance gap. They recommend an overhaul of training and qualifications (see box) with the introduction of a card system to easily identify on site those with energy knowledge and skills.

Adams believes that the report’s comparison with health and safety makes sense. “Like safety, it touches all aspects [of the industry] to a greater or less extent,” he says.

However, Mactavish points out that the factors driving improved health and safety, such as the risk of accidents, are more immediately pressing than those underpinning the steps needed to address poor energy performance. What is the incentive for the industry to get its act together?

The report argues that market mechanisms alone will not deliver the performance, acknowledging that only a small number of housebuilders use built performance as a marketing tool.

And the government is unlikely to welcome anything that gets in the way of its drive to increase the supply of new homes. With fresh regulation currently out of fashion in the Conservative-dominated coalition, the report opts for a “nudge” approach to raising standards. It recommends that only if the industry fails to meet the performance gap target by 2020, should the government step in with regulations.

As an example of this “softly, softly” approach, the report recommends that failure to carry out checks on buildings’ energy performances should not be penalised.

Stewart Dalgarno, director of product development at housebuilder Stewart Milne, sees little consumer demand for efforts to improve energy performance. “The houses we have built are performing very well in the eyes of the customer’s expectation in terms of energy. It’s not a consumer-led issue at all.”

How people use their homes has a much bigger impact on emissions than any performance gap, he argues. “In terms of proportionality, you can get a far bigger positive impact through education.”

However Tebbit, who was until recently deputy chief executive of the Construction Products Association, believes that consumers will become more interested as the 2016 zero-carbon housing deadline gets closer. “It may not be a great issue now because we are still putting great big heating units in. Once you are building to 2016 standards, you will be looking at homes with no heating system. You really have to be sure that it’s performing because you won’t have the option of turning up the heating.”

Mactavish adds that when it comes to the drive to curb carbon emissions, tackling the performance gap is “low hanging fruit” for the industry. He points out that developers have usually invested large sums in low-carbon technologies at the design and construction stage. For the building to then fail to perform because expensive kit has been badly installed represents a huge waste of effort.

However, Adams is pessimistic that the approach outlined in the report contains sufficient incentives to deliver the scale of change required. “It’s not high on the agenda of house purchasers. I am not optimistic that the industry will be so enlightened as to deliver this at a mass scale where there is relatively little brand or marketing benefit to it.

“There will be some companies that want to push ahead. However, to achieve the government objective of energy security and reduction of carbon requires an industry response: there needs to be a reason for companies to benefit if they do it right, and it needs to be to their detriment if they choose not to. Otherwise we will not do this at scale.”

The Hub’s reluctance to toughen the compliance regime clearly worries some. However, its report provides a comprehensive route map for improving not only the energy performance of the UK’s new-build housing stock, but its overall quality.