Architect forecasts improvement in 2013 and 2014 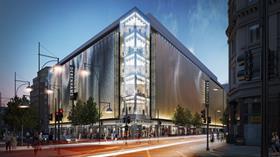 Architect Archial has reported a 28% fall in monthly revenue in 2012 as it shed over 100 staff.

In both 2011 and 2012 the firm underwent restructuring following its purchase by Canadian consultant Ingenium Group.

Chris Littlemore, chief executive of Archial, that the firm currently had around 145 staff and was now recruiting people for a number of its UK offices.

The accounts also revealed  the firm cut its average monthly pre-tax loss by 7% over the period.

Littlemore, said the firm’s “cost base” in 2012 was swollen by restructuring costs and “exceptional, consolidation and integration expenses arising from the combination of Archial into the global enterprise of The Ingenium Group”.

He added: “In effect, the business has been performing better through the 2012 period than previously and this continues on into 2013. The projections for the next 12 months show a much stronger performance in 2014.”

He said the firm’s strategy involved growing its international portfolio of work and Douglas Lang, president of Ingenium Group’s international division, had been brought into the London office to assist with this.