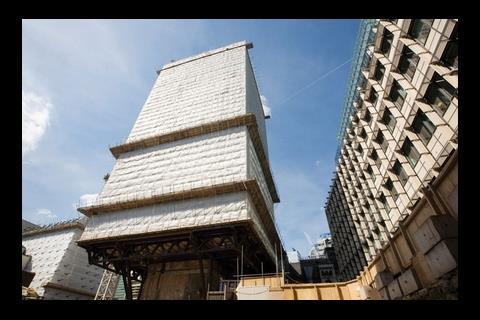 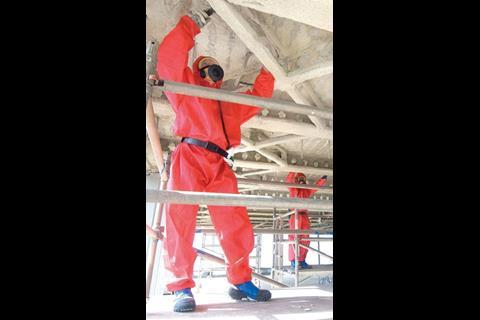 The building was full of asbestos which had to be carefully stripped. 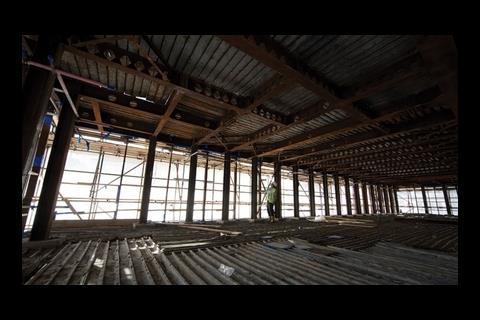 Once all the asbestos was cleared, temporary columns were placed at the building perimeter so the floorplates could be supported from below 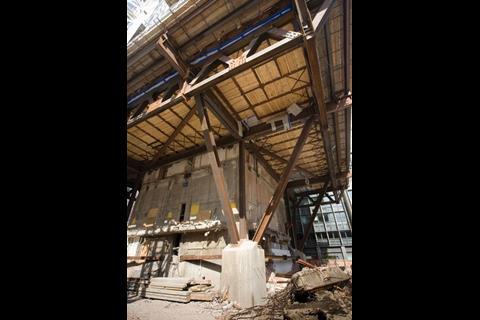 When Keltbray was given the task of taking down a 25-storey building in the City to make way for Rafael Viñoly’s Walkie-talkie, it found that conventional demolition techniques were of no use.

Last year a low-key demolition job in the City of London became big news. National newspapers carried striking images of a building being demolished from the bottom up. The top floors were left dramatically hanging in space as the lower ones were removed, leaving only the concrete core. The pictures begged the question: how did the top half stay up?

The answer is that the floorplate edges were supported by hangers from the roof rather than columns from the ground. This is good for creating uncluttered perimeter space inside a building, but the downside is that it is difficult to demolish using conventional methods because the building will collapse if the roof is removed. With demolition specialist McGee busy pulling down the building in question – at 122 Leadenhall Street – there are just three top-hung buildings left in London.

Not for much longer. Another demolition specialist, Keltbray, is busy taking down a top-hung building in nearby 20 Fenchurch Street to clear the site for the Rafael Viñoly-designed Walkie-Talkie tower. The difference is that Fenchurch Street is 25 storeys high, whereas Leadenhall was only 15. “It was a baby thing compared to this,” jokes Jim O’Sullivan, Keltbray’s contracts manager in charge of the job.

What makes the building so hard to knock down? The main problem is the roof structure, which has to be huge to take the weight of all those suspended floorplates. The roof is triangulated, takes up three floors of space, and is built from heavy post-tensioned concrete beams. “You normally see this sort of post-tensioned structure in bridge design,” says O’Sullivan. “It was a major engineering feat at this level.” The lack of perimeter columns also means the building has a more substantial core than usual. These factors mean a similar feat of engineering is needed to get the building down again.

Several demolition options were explored. “We considered explosives, but it wasn’t really possible,” says O’Sullivan. “It’s a confined city-centre site, the building is high with a top-heavy structure and there are a lot of congested services around it.”

What about copying the technique used by McGee? “In our opinion it would have made it much more complicated,” says O’Sullivan. He says problems would start once all the floors had been removed, leaving the core and roof structure. “We would have ended up with a big concrete mushroom,” he says. This would have needed a substantial scaffolding structure to provide a platform for demolition equipment to break up the roof structure and the core, and provide protection to the local workers and buildings below.

The solution was to insert temporary columns around the building perimeter, in effect turning the upside-down structure into something more conventional, so it could be demolished normally. “We decided resupporting the structure bottom up was the safest and most appropriate method,” says O’Sullivan. He adds that McGee is also taking down the top seven storeys of its building this way. McGee took out so many bottom floors not to create publicity for the demolition industry, but to enable demolition and new construction work to take place concurrently. Removing the lower floors created the necessary headroom for piling rigs to start work on the new building.

Another difficulty facing Keltbray at Fenchurch Street was asbestos. While it got the temporary works under way, this had to be removed from the tower, which took 17 months. The building had floors made from steel decking topped with concrete. The asbestos was sprayed all over the original steelwork, including the decking, and was encapsulated under the concrete. Each floor was protected with plastic sheets and placed under negative pressure to stop asbestos escaping, then the concrete slabs were broken out and the asbestos removed, first by scraping with small excavators, then by specialised grit blasting and finally by hand.

Meanwhile, the temporary works were designed in-house by engineering arm Wentworth House, and were being installed. Steel columns were inserted between the floors. Each column needed a plinth cast for it to take up the slack. More than 1,300 columns were installed, adding up to two miles of steel.

Before the hangers supporting the floorplates at the top of the building could be cut, a connection between the temporary columns and solid ground was needed. The easiest solution was to transfer the loads from the columns to the structure already supporting the building – that is, the core.

The device used is a large truss that encircles the building’s base. This supports the columns and transfers the loads to the core using a large, angled concrete column at each corner of the core. To create the space for the truss the second floor was taken out in a similar fashion to the building in Leadenhall Street. The truss was built up on the first-floor slab from prefabricated elements over eight weeks using forklift trucks, as its location was inaccessible to a tower crane. The concrete columns were cast, then two big A-frames were built and strand jacks used to haul the 250-tonne truss up into its final position under the third-floor slab. The first-floor slab was taken out and the truss connected to the columns, ready for its big moment.

That day was a Saturday, when all the hangers supporting the floors below were cut with oxyacetylene cutters, a job that took just two hours. The moment the last hangers were cut, the loads were transferred from the hangers to the columns at the edge of the building, down into the truss below and into the core. “When we cut the hangers there was a bang, the hangers dropped by 35mm, the truss dropped 16mm and the whole building shook,” says O’Sullivan. “It was a combination of the steel hangers contracting, and the roof rising as the loads were released. For 40 years the building has been top hung and now we have turned it up the other way.”

There was one more important job to do before Keltbray could start demolition. It needed to check that the post-tensioned concrete beams used for the roof structure were safe to break up. Post-tensioned elements have steel strands running through ducts in the concrete which are tensioned after the concrete has cured. These ducts are filled with grout to lock everything in place, but if the beams hadn’t been grouted properly the steel tendons could contract explosively when broken up.

Keltbray used ground penetrating radar to locate the ducts in the beams, then ultrasonic tests to check the integrity of the grout. Just to make doubly sure the beams were safe, one was taken out and carefully broken up in the basement. “We wrapped it in big rubber mats and sandbags because if it went bang there was nothing we could do,” says O’Sullivan. The tests showed the beams were safe and Keltbray could start demolition.

To demolish the roof structure six excavators were craned up onto the roof to break up the concrete structure into chunks weighing no more than 16 tonnes. These were then lifted off with the tower crane. The 23rd floor has been particularly heavy work to break up as it is made up from a very heavy slab (see box).

Keltbray has now virtually demolished the roof structure so the job should become more straightforward, although O’Sullivan points out the core is particularly substantial.

The building should be down by Christmas. Mace will start putting in secant piles around the perimeter of the site to form the basement in August, and Keltbray will clear out the raft foundation under the tower and excavate the new basement ready for Mace to start on the Walkie-talkie – hopefully later next year.

Back to the beginning

20 Fenchurch Street is one of just four buildings in London with floorplates suspended from the roof structure.

Keltbray wanted to research the building as much as possible before working out the demolition process and fortunately found the original drawings and even photographs of the construction.

Designed by CLRP Architects and structural engineer John Mason and Partners, it was built by Trollope & Colls between 1963 and 1968. This might seem like a ridiculously relaxed programme by modern standards, but the reason it took so long was because the roof structure had to be redesigned during construction. It was originally going to be built from steel, but it was found the thermal movement of the steel would have caused metal fatigue. It was redesigned using post-tensioned concrete, adding two years to the programme.

The roof structure occupies the 23rd to 25th floors. The 25th level is independent of level 23 and supports the plant rooms. Level 23 is substantial and is made from a heavy slab and has a big, box section perimeter beam which was connected to the steel hangers supporting the floorplates. This level was also given extra support using a triangulated structure. Raked post-tensioned beams connect the edge of level 23 to the core at level 25. The raked beams are connected at this level by a “waffle” type slab.