Renovating an almshouse site in Streatham, south London, meant a balancing act for bptw partnership between upgrading horribly outmoded 1930s housing standards and staying true to the Edwardian aesthetic of the charity-run homes. By Ike Ijeh. Photography by Robert Greshoff 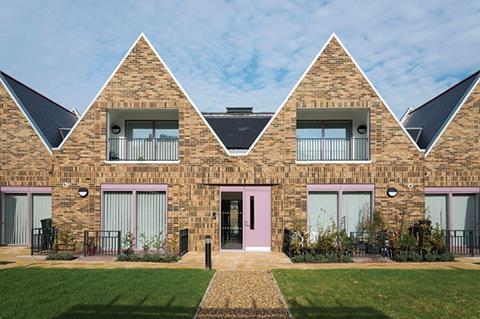 There aren’t many housing types first established in 10th-century Saxon Britain that are still in use across the world today, but the almshouse is one of them. Because of their extraordinary longevity and the fact that the charitable institutions that usually own them are indicative of an age long before the state became the primary provider of accommodation for the most vulnerable in society, almshouses are almost exclusively associated with the past. But a new housing scheme in Streatham, south London, represents a rare attempt to recreate this most historic of typologies in modern form.

Thrale Almshouses is a development of 17 new and refurbished homes for elderly people designed by bptw partnership. Almshouses have been on the site since 1584 but the current buildings were built in the mid-1930s in the late Edwardian style.

Visually, almshouses offer a picturesque and pastoral complement to the urban streetscape, particularly in inner-city areas such as Streatham. However, with their age inevitably comes problems, even in relatively young complexes such as Thrale.

Three principal problems emerged as challenges any new development would have to address. The first was a familiar one where historic buildings are concerned – increasingly inadequate facilities. Many aspects of 1930s housing standards are incompatible with expectations today and presented a host of complaints. They lacked kitchens and food preparation areas, and instead featured what essentially amounted to a hotplate and a small worktop, which were woefully inadequate. As were bathrooms and toilets, which were considered small and outdated. 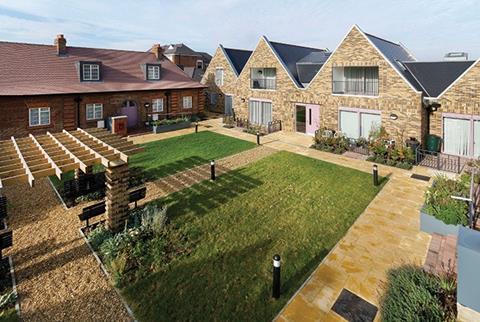 The 1930s almshouses have been redeveloped by a combination of refurbishment, new-build and demolition

And the third problem was to do with layout. Like most almshouses, Thrale followed a horseshoe footprint with an open courtyard to its adjacent street. However, the problem was that the buildings were set back so far from the street that residents complained of feeling isolated yet exposed. This also carried with it security concerns, as would-be intruders would be free to trespass without fear of being overlooked from the street.

Andy Heath, bptw partner, sums up Thrale Almshouses’ former problems like this: “The almshouses had been well managed and run but in many ways they were tired and outdated and in need of a comprehensive overhaul. Rather than a piecemeal renovation approach that would manage rather than eradicate its problems, we were able to convince the charity [Thrale Almshouses & Relief in Need] to do something a little more radical.”

What this amounted to was a complete reworking of both the layout and fabric of the almshouses. Formerly, the almshouses comprised three separate, single-storey pitched roof wings arranged around a courtyard. Architect bptw’s solution was to retain the two side wings, demolish the central wing and replace it with a new contemporary block.

Furthermore, in order to balance and enclose the newly landscaped courtyard, a further new contemporary block was added opposite the first one, thus ensuring that the almshouses were brought much closer to the street line in an attempt to neutralise the security concerns. 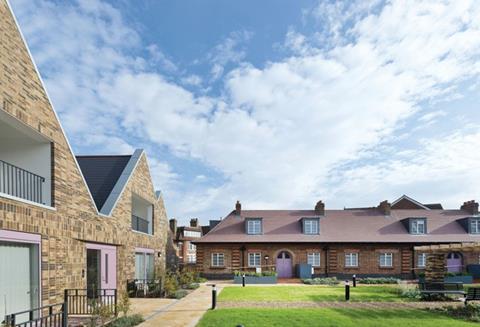 The new buildings are inspired by the form, materials and proportions of the two retained blocks

From the original 10 units, the eight within the two retained blocks were extensively refurbished. An additional nine have also been added, three in the block that replaced the demolished central block and six in the new block that closes the courtyard and now forms its entrance.

Though Thrale Almshouses were not statutory listed buildings they were locally listed and recognised throughout the local area and community as buildings of special architectural and historic interest. Was there then opposition to demolition of the central wing?

“It was seen as a compromise; the best of both worlds,” explains Heath. “Wholesale demolition and redevelopment would have fundamentally changed the scale and character of the site and damaged the historic relationship it maintains with its local area. But retaining all the buildings in their previous form would have not provided the additional units required to make the redevelopment stack up financially. The lesson we’ve taken from this process is that not reaching too far and coming up with a modest scheme is sometimes the best way.”

This solution meant that the redevelopment now proceeded on two concurrent lines, refurbishment and new-build. From their entrance elevations, the refurbished wings on either side of the courtyard appear little altered. However, there have been radical changes within and at the rear.

Inside, the one-bedroom houses have been thoroughly modernised and extended. Windows have been replaced, new bathrooms and toilets installed and loft space previously used as storage has been converted into an en-suite bedroom.

In terms of fabric, new insulation has been added throughout and, where necessary, roofs have been repaired to present heat loss. Heath reveals that the design team took a judicious view as to what they could and couldn’t do. “Certainly where we had reasonable access to elements like roofs and external walls, we ensured that the fabric met current building regs standards,” he says. 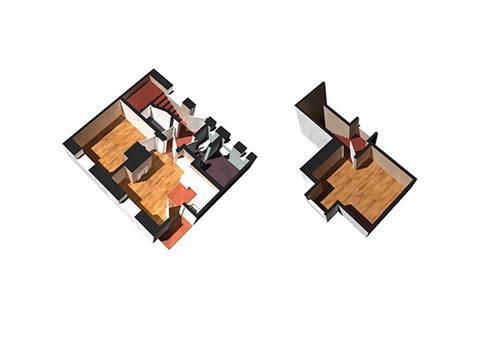 The most radical measure undertaken in the existing homes was the addition of new kitchen “pods” to the rear. These are directly accessed from the interior through an existing opening that previously led to the rear gardens and they give the units modern fitted kitchens for the first time. This thereby addresses one of the main concerns previously voiced by residents.

The new kitchens are also key to delivering the new house layouts. Moving them beyond the original footprint of the original house freed up space that was allocated to a new bathroom and enlarged living area.

With the new housing contained within the two new facing wings, there were none of these restrictions in terms of meeting current regulations. Units offer spacious, generously lit rooms and each property has large opening floor-to-ceiling windows and upstairs flats offer deep recessed balconies.

However, with the new buildings it is the exterior that reveals the design strategy that has been adopted to integrate new with old. Several architectural features are incorporated into the new block that are directly inspired by the original buildings.

Most obviously this includes the use of a closely matched brickwork but it also incorporates projecting soldier course details, stack bond details, slate roof tiles and pitched roofs. With its raised corbels and quoins there is a utilitarian muscularity of scale and surface on the existing blocks and the new wings pick up on this in elements like their thick canopies and deep reveals. 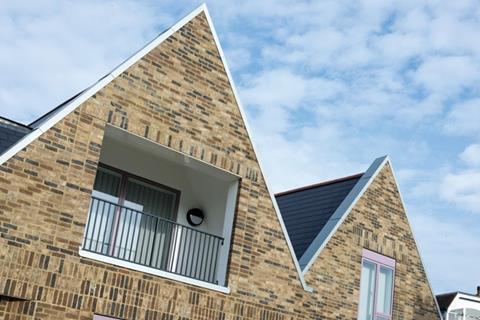 Deep reveals, soldier course details and pitch roofs are some of the architectural features that bind old and new together

There are also contemporary flourishes that carefully differentiate new from old: the smooth, streamlined finishes, sculpted form and most significantly, the use of gable walls turned inward to face the courtyard rather than the hipped roofs of the Edwardian wings.

While the lilac colour scheme applied to doors and windows might not be to everyone’s liking, particularly as it has also been extended to the older wings (at the apparent behest of the planners), in both their rhythm and scale the new buildings form a crisp, subtle and convincing contemporary reinterpretation of a historic, long established housing typology.

The scheme bears a real sense of visual unity with the new wings working hard to reference historic features while maintaining an overall character that is confidently but not threateningly contemporary. It is a difficult trick to pull off but all in all the development does it well.

For Heath, the project has also formed an important touchstone with regard to how he believes conservation should be tackled. “You have to identify the key heritage assets then prioritise what you choose to do accordingly, retaining whatever original fabric you can along the way. That way you can effectively lock a new intervention into its context.”