Fraser Brown MacKenna’s renovation of Bethlem Hospital’s Museum of the Mind may look from the outside much as it did, but the interior spaces now house art galleries, exhibition spaces and an incomparable archive 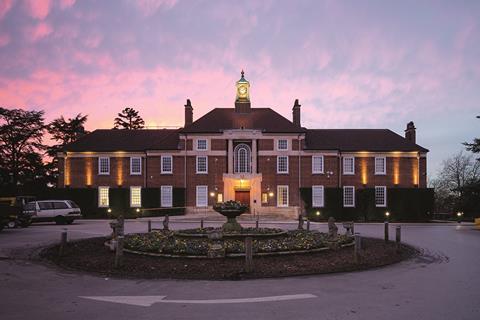 Not many hospitals are notorious enough to have coined a new word in the English language, but south London’s historic Bethlem Royal Hospital for the treatment of mental illness is one of them. Such were the scenes of chaos and pandemonium that once ensued from patients within its wards that from the Elizabethan period onwards, it spawned the eponymous word “bedlam.”

Founded in 1247, Bethlem is Europe’s oldest psychiatric hospital and can note eminent personalities such as Houses of Parliament co-architect Augustus Welby Pugin and Victorian illustrative painter Richard Dadd among its former patients.

Today, the hospital is located in the rather more sedate suburban confines of Beckenham, in the south of London. Its luscious, tranquil grounds belie the fact that it is the UK’s most secure mental unit after Broadmoor. The current building is a stately neo-Georgian pile dating from 1930, the fourth the hospital has occupied since it was originally built near the site of today’s Liverpool Street station. With perhaps grim irony, the buildings it last occupied are now home to the Imperial War Museum in Lambeth.

The latest chapter in Bethlem’s long history began late last month with the opening of the hospital’s refurbished Museum of the Mind. The museum, first established in 1970 in what is now a hopelessly inadequate temporary site hut elsewhere on the site, has been completely renovated and renewed by architects Fraser Brown MacKenna. The new museum is housed in the former administration block which has also been extended.

While the idea of a psychiatric institution hosting a museum may seem strange to some, it sits firmly within the historic legacy of exhibitionism and display that has actively defined Bethlem’s past. Victorian culture in particular had a lurid fascination with madness and for as long as the hospital has been in existence it has attracted hordes of the morbidly curious keen to witness for themselves the flights of lunacy that often prevailed within its walls. Even the hospital’s past architecture gradually assumed an air of rambunctious performance, best conveyed in the domed, palatial pretentions of its former Imperial War Museum home.

Today of course, patients are rightly kept away from any trace of voyeuristic glare and the museum’s permanent collection offers a fascinating account of the hospital’s long history of psychiatric treatment, including 450 works of art related to the field of mental illness. 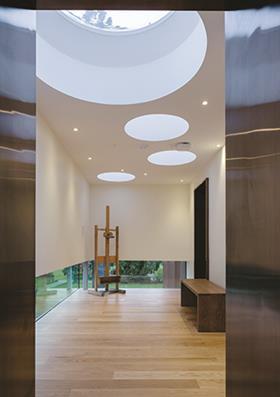 This new accommodation replaces the offices and nurses’ quarters that were previously housed within the administrative block. Despite this radical overhaul, Fraser Brown MacKenna associate director John Senior reveals that the project had a very specific scope. “Cosmetically, we didn’t have to do a great deal. There was some limited water damage and occasionally we had to replace bits of cracked marble but in the main the building fabric was in very good condition. The project was essentially about refurbishing and reorganising the sequence of internal spaces to make the maximum use of the space available.”

Accordingly, externally, the building looks largely as it did before, albeit in better condition with its distinctive red brickwork and stone dressings now cleaned and repaired. The only external additions are two new fire escape stairs to the rear and a shallow two storey-extension beside it.

The stairs are expressed as perforated aluminium cages painted brown to match the brickwork. The rear extension to the north was required to accommodate the new archive, which occupies most of one half of the ground floor of the building.

As the building’s plans and elevations are symmetrically classical, this was also replicated on the southern end. The extensions are clad in red brickwork to match the existing bricks, with the only contemporary concessions being the large and horizontal strip window openings on the north and south additions respectively.

It is internally where the extent of the refurbishment becomes clear. The entrance hall has been lovingly restored, with standard issue blue NHS vinyl flooring thankfully stripped away and the original travertine floor underneath exposed. The elaborate bronze art deco staircase handrails have also been meticulously cleaned and repaired.

Two symmetrical limestone plinths have been created on either side of the double-flight staircase, close enough in shade to the travertine to appear visually consistent but distinctive enough to suggest new intervention.

The two plinths now support two crouching statues that have become something of symbolic heralds for the hospital over the past four centuries, the rather indelicately named “Melancholy” and “Raving Madness”.

Each one once adorned an entrance gatepost of architect-scientist Robert Hooke’s 17th-century hospital building and was carved by the celebrated baroque sculptor Caius Gabriel Cibber, stonemason to St Paul’s. Despite being the only part of the Hooke building to survive, they were previously unceremoniously stored in a cramped corridor in the old museum.

On one side of the entrance hall lies the new gallery and art studio beyond. This is where artworks completed by current and past patients are exhibited. The rooms are simply decorated with white surfaces and restored original sash windows admitting generous amounts of
natural daylight.

Senior reveals that the principal structural intervention here was the removal of internal partitions to create larger gallery space. As the opposite side of the entrance hall contains more administrative areas and a reading room, a greater number of internal partitions have been retained. As Senior points out, these were also useful in helping support the first floor slab.

By far the biggest intervention on this northern end of the ground floor is the new archive. This has been designed to full BS5454 standards for the preservation of archival material, and has been placed within a concrete, double-skin blockwork supported by new foundations. The box sits within the original brick external shell and not only offers four-hour fire protection but has also been designed to withstand a catastrophic collapse of the building around it.

As Senior points out, the archive was a key driver of the overall project as well as being the most complex part. “We extensively modelled how much space we’d need for the archive in BIM. We also applied 30% additional capacity for future growth. This determined the size we’d need, which resulted in the building slightly extending to the north, which we mirrored on the other side.

“It’s also in the northern end of the building as this is the best light for conservation work. Also, in order to ensure that the archive is fully watertight, it’s surrounded by a special liquid applied water membrane that bonds between layers rather than melting as would be the case with a plastic sheet in high heat. So if there was a fire elsewhere in the building, the archive contents wouldn’t be damaged by attempts to extinguish it.” 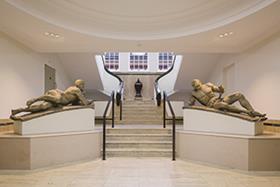 Upstairs the interiors continue in the same visual vein as established by the art gallery below. The first floor is essentially split into two, a temporary exhibition gallery to the south and the museum to the north.

Both offer generous views to the rich surrounding natural landscape, a connection most vividly felt in the two new “contemplation rooms” inserted above the north and south ground floor extensions. With their copper trimmed entrances and large circular skylights, these offer subtle yet fitting contemporary additions.

The museum itself offers an utterly fascinating permanent collection of various treatment methods, implements and effects of almost 800 years of psychiatric care. While natural light is permitted without hindrance into the temporary exhibition gallery, it is more controlled here in line with the museum’s curatorial strategy.

Senior summarises the architectural and environmental approaches in these two spaces as similar to that adopted downstairs. “We’ve stripped out almost all the partitions upstairs, none of them were load-bearing anyway as the iron trusses within the pitched roof carry all the loads. We’ve beefed these up slightly to accommodate the new plant also placed in the roof.

“We’ve also applied new insulation to all external walls and created u-values where none existed before. Environmental control requirements mean that while the museum and archive are mechanically ventilated, there is natural ventilation elsewhere.”

One rather macabre aspect that Senior reveals is the extent of the preventative measures adopted to prevent ligature hanging, a grisly reminder of the hospital’s core psychiatric purpose. “This was a constant consideration throughout the project. In the toilets, for instance, there are no holes through which anything can be tied, such as conventional hooks or handles. Even the perforations on the external stair cages had to be small enough to ensure that nothing could be looped through them.”

For Senior, the building itself acts as “therapy”, as he summarises. “The exposure to daylight, the rearrangement of spaces, the views out towards the landscape, these are the elements we’ve sought to maximise.” While, as Senior himself acknowledges, it may not be instantly obvious to some what they have actually done to the building, even restraint and deference are architectural decisions and their adoption here not only respects and utilises the fabric of the original building but also provides an appropriately sedate backdrop to an ancient institution in which history and healing take centre stage.

And for gallery director Beth Elliot, it is this critical healing agenda that has been best served by the new refurbishment. “By respecting the capability of individuals and providing ongoing support and opportunities for residents to create and exhibit their own work this new building is an important experimental testing ground that demonstrates the powerful and unique role that art therapy can play in the recovery process.”