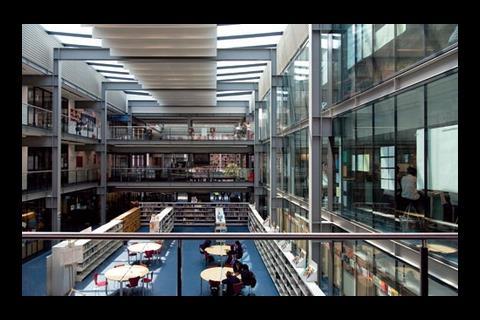 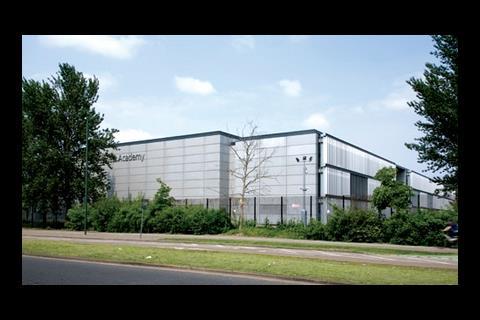 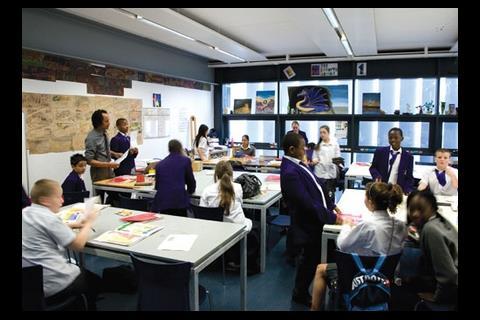 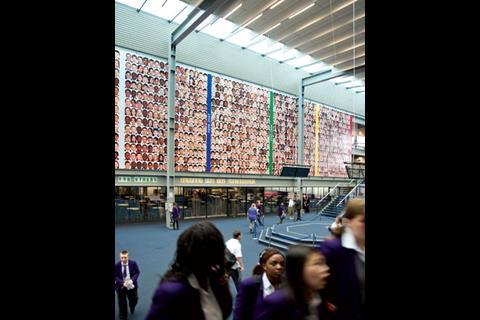 A large portrait wall gives students a sense of belonging 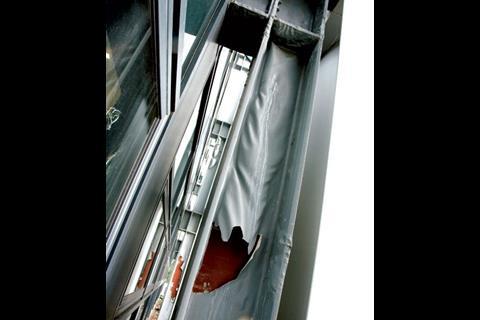 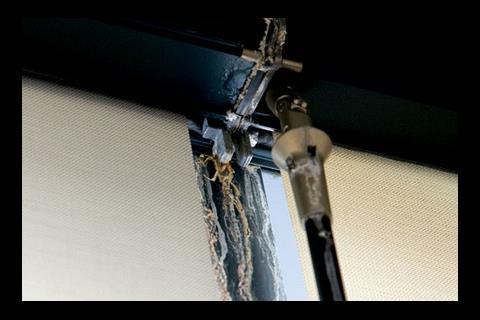 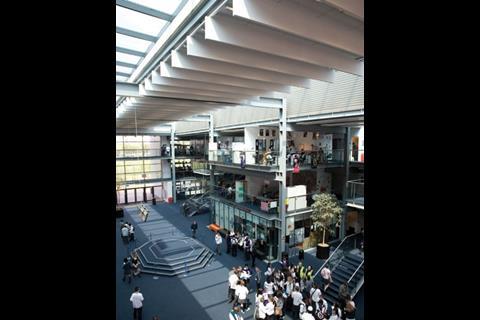 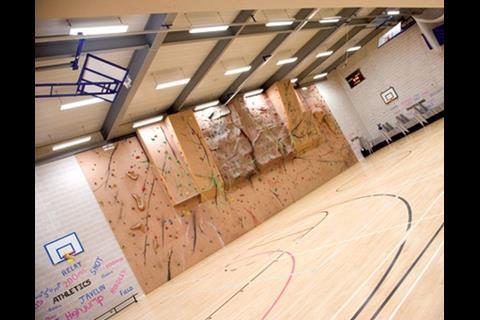 The sports hall and changing rooms are too small and inaccessible 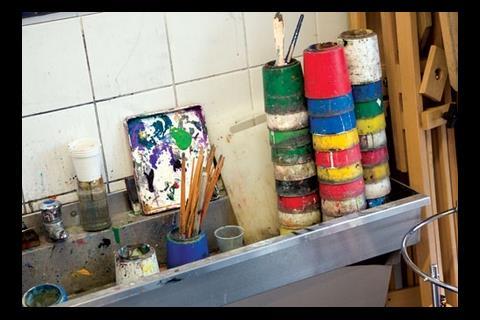 Teachers complain of lack of technical facilities and storage space

The open-plan design of Foster + Partners’ Bexley academy was derided when it opened six years ago, and it has since suffered a leaky roof and peeling paint. Still, staff and students all really love it

When it opened in 2002, Bexley Business Academy grabbed the headlines. It was officially opened by Tony Blair, as the first of his programme of city academies to operate independently, yet be nearly entirely state funded. The Bexley academy fitted the old Labour bill, as it was located in the socially deprived new town of Thamesmead in south-east London and replaced a failing school placed in special measures by the Department for Education and Skills. The controversial New Labour twist was that it was sponsored by property developer, Sir David Garrard, who donated £2m of the £31m capital funding and brought in the school’s leading staff and the design team led by Foster + Partners.

Foster’s building was as revolutionary and controversial as the school’s educational concept. Designed to house 1,350 students, it was a slick, three-storey building with adjustable fins on the outside and all open plan on the inside, with 20 classrooms opening onto a trio of huge light-filled atriums. It won a coveted RIBA National Award and was even shortlisted for the Stirling prize.

Four years after opening, Garrard became embroiled in the cash-for-honours scandal, and Building was barred from visiting the school. But two years later, the edginess has calmed – partly because Garrard has come through the cash-for-honours saga with a clean bill of health. Building was welcomed by the school’s current chief executive, Sam Price, and principal, Duncan Spalding. Together with the staff and students, they have quite a story to tell.

Yes, they have achieved educational success, with GCSE pass marks jumping eightfold over six years and the new building fostering a palpable sense of pride among staff and students. On the other hand, the building has had more than its fair share of problems. These range from the predictable spread of noise among the open-plan classrooms to a list of technical defects including peeling paint, leaking roofs, flimsy partitions and foul-smelling drains.

On the educational front, Spalding expects that this year nearly half the students will attain five or more GCSE passes at grade C or above, whereas only 6% achieved this in the defunct failing school. In addition, the school now boasts a sixth form of 130 students, whereas none existed before. Spalding attributes most of the educational success to the staff, but acknowledges that the building has contributed by providing efficient teaching spaces and engendering a sense of community and belonging.

When it comes to the building’s problems the most glaring of these was the open-plan arrangement. To be fair, the idea did not emanate from Foster + Partners, but from the original chief executive, Valerie Bragg, who hoped this would provide transparency and stimulate learning through interaction. But students and staff all agree that teaching and learning in the classrooms were undermined by external distractions and the spread of noise from the rest of the building. “It also inhibited risk-taking and excitement in the classroom, as this might impinge on other classes,” adds Spalding.

To remedy the problem, clear-glazed partitions were installed last year to separate classrooms from the adjoining circulation decks and atriums. The £600,000 bill was split between the school’s revenue budget and the local education authority. The partitions have had the liberating effect of blocking noise while retaining the original transparency. “Transparency is the key advantage of this building,” enthuses Spalding. “It allows me to keep an eye on what’s going on all over the school, and new teachers feel visible and not shut away.”

The other serious architectural shortcoming is the sports hall, which, along with its two adjoining changing rooms, is undersized. The hall is just three badminton courts in area – less than the minimum school size of four courts. The changing rooms were also designed for a maximum of 25 students each, but often have to cope with 80 students at a time. “They’re too cramped, hot and sticky,” says Marlon Button, head of PE. Chief executive Sam Price adds: “As a result, a lot of kids just don’t want to do PE.”

When it comes to the build quality, there are two outright disasters and a list of ongoing problems that add up to a sizable maintenance bill. “The building just isn’t robust enough,” says facilities manager Brian Plumer. Jane Stanley, the financial director, adds: “We spend 9% of our annual government grant on premises. Given that average spend on staff costs in schools is over 80%, this clearly represents a high proportion of grant income and leaves little for other equally vital expenditure.”

The first technical disaster was the ICT system of cabling, servers and wireless technology, which Price says “failed from day one and put the telephones out of action for three months”. After three years, the network was replaced at a cost of £1.2m.

Transparency is the key advantage of this building. It allows me to keep an eye on what’s going on all over the school.

The second disaster was the intumescent paint finish to the external structural columns and beams, which is visibly peeling off. A recent survey by the Paint Research Association blames poor workmanship and unsuitable weather conditions when the paint was applied – and estimates repair costs at £500,000. A dispute is under way with the original contractor, Exterior International, which blames poor maintenance since the handover.

More than that, the flat roof suffers from ponding and frequently leaks. The heating and air-conditioning system often breaks down and has had five of its six pumps replaced. The internal metal stud partitions are lined with thin plasterboard that is often dented by rough usage, and they have had to be reinforced with medium-density fibreboard. And there is a litany of complaints about foul smells from drains permeating classrooms and changing rooms.

As for heating, ventilation and general energy, this added up to 286kWh/m2, costing £15.53m2 for the year 2007/08. Compared with CIBSE benchmarks, this is high for schools and more in line with offices, and may have been boosted by high levels of computer use and air-conditioning.

Nevertheless, the image of the building is clearly a winner, and has a positive impact on staff and students. “It’s more like a workplace than a school. It makes you feel more mature,” says Dineo Allen-Copeland, one of the four-strong student council.

Admittedly, the exterior presents a grey windowless facade and has been likened to a warehouse or aircraft hangar. Even so, principal Spalding says: “The fact that it is something completely different to the concrete environment of Thamesmead has had an important psychological effect.”

For those who venture inside, the light and spacious atriums and views into classrooms on all sides have an immediate impact. “It is a building with a heart,” says Spalding. “There are no backwaters or forgotten areas where bullying might take place.”

The other main feature of the interior is the portrait photographs of all the students that make up an entire two-storey-high wall overlooking the main atrium. “It encourages a special sense of belonging,” says Spalding.

For Stefan Novkovic of the school council, the buzz created by staff and students congregating in the atriums and overlooking dining hall makes up the building’s main attraction. “I come in early to the breakfast club and chill out with my friends,” he says.

The school’s compact arrangement around the atriums, without corridors, makes all the spaces quickly accessible. The downside is that the school does not yet double up as a community facility, as this would require more management resources to safeguard the classrooms and their high-tech equipment.

Perhaps Bexley academy’s story of problems mixed with pride is best summed up by resident services engineer Paul Turner. He reels off a list of technical issues he has to deal with every day, but then adds: “The kids love it. We have the problem of getting them to go home in the evening.”