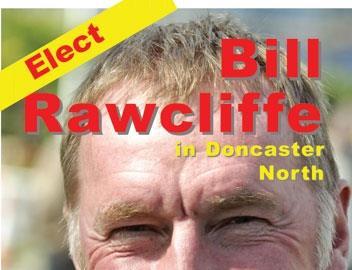 Bill Rawcliffe is one of the many victims left by the collapse of Jarvis. So he started a campaign for justice, and failed to make progress. So, next stop the House of Commons

What inspires a 53-year-old rail worker from Yorkshire with no political background or experience to decide, overnight, to pull together a campaign team of friends and family, set up camp in a makeshift base and stand as a parliamentary candidate in the general election? For Bill Rawcliffe, it was because he had something to say about the treatment of a group of construction workers, and running for parliament was the best way he could think of to make sure his voice was heard.

He was made redundant last month along with 1,200 other workers – 350 in his local area alone – when Jarvis went into administration. Rawcliffe says, since then, neither he nor any of his colleagues have been paid for the last four weeks they did before the firm collapsed, and have not received any redundancy pay or information from the administrators on what their rights are, or what will happen next. Rawcliffe has been leading a campaign group, Justice 4 Jarvis workers, ever since the firm went bust but says it wasn’t making enough impact, so, he decided to take things to another level.

So, two weeks ago he made headlines by announcing that he would be standing for election against Ed Miliband in Doncaster North for the Trade Union Socialist Coalition.

“A fortnight ago, nothing was further from my head than getting involved in politics,” he laughs from his newly formed campaign headquarters in York. “I’m a railwayman and I want to be a railwayman. But you can only play the cards you are dealt.

“When the news about Jarvis first broke, some local MPs promised to help us. But then we moved into the election period and they all said there was nothing they could do then until after the election. So we were left with a 1,200 workforce stuck with no jobs, all signing on. People were going to the depots and stripping machinery out of all the workshops. But I decided to take a different approach. If the local MPs couldn’t help us, then I would stand for parliament myself. Out of sheer frustration more than anything else.”

Now, well and truly on the campaign trail, Rawcliffe is learning as he goes but has thrown himself into leafleting and setting up tours around the most important areas in his would-be constituency. The Jarvis campaign is high up on his agenda but he is aware that this, and even broader construction issues, cannot make up his entire manifesto. And so, he is also advocating and end to privatisation, the renationalisation of privatised industries and improvements to the railways and public transport.

He is also pushing for better provision of affordable housing. “It’s a desperate situation,” he says. “Especially for young people who can’t afford to get onto the property ladder, and so I will be standing up against the selling of any more council estates for new developments and will be pushing for refurbishment programmes instead.”

What are the chances?

Rawcliffe certainly has plenty of passion but does he really think he might beat Ed Miliband? He is, as yet, unconvinced. He has only had about three spare days since he made the decision to stand and he is well aware that he doesn’t have a PR machine, planned strategy or even much in the way of funding. But he does think he may appeal to lots of people living in the area. “It’s been a tough time for people all over the country recently, I know,” he says. “But up here we’ve had it particularly bad. And people up here also have very long memories and I offer something different to the others candidates in that I am just like the people living here. And so yes, I think I can give the others a run for their money.

“Also, they are all the same, the others. They all look plastic to me. Ed Miliband looks like a little rabbit caught in the headlights. Though, having said that, I wouldn’t really be able to tell him for the others. Me. I’m rough and ready and I have calluses over my hands. If a working man is what the people of Doncaster want representing them then I will get down and do some hard graft.”

Plastic or not, Miliband will be a tough candidate to beat and, in reality, Rawcliffe’s chances don’t look all that promising. But in a way, that’s not really the point. His decision to run has given him a higher platform from which to shout about his views and thoughts on the construction industry and to raise awareness about issues, and one in particular, that affect workers in this sector.

And there is an air of the politico about him yet as Rawcliffe suddenly cuts the conversation short as he running late for his next appointment. But before he goes, what would be his final message to the construction industry and, more specifically, to the people living in and around Doncaster who may decide to back him with their votes?

“I am not really into political slogans,” he says. “I don’t know if that’s a bad thing or not. What I can say is that if the working people elect me, I will be doing the job on a working person’s salary. I won’t be getting into any of these ridiculous expenses and if I want a house for my duck pond – if I ever get one – I’ll build it myself. I’m a construction worker, aren’t I?”

Rawcliffe on the Jarvis debacle

Our treatment when Jarvis went into administration has been horrendous. We were all dumbstruck when we heard the news.

We weren’t even the first to be told. The first I knew of it was when I was watching Sky News at home before I left to go to work on the day it happened. I haven’t received any pay for seven weeks now. Five weeks of that is for work that had already been done and most of us are in the same situation. I was sent a form by Deloitte [the administrator] saying I was a creditor, with an inventory. But I don’t really want an old desk or a broken telephone as a repayment.

The firm was due to sign a contract for £3.2bn worth of work for Network Rail on 31 May – a day after Jarvis went into administration. That work is still there, but has been divvied up between other firms including Babcock and Balfour Beatty. They are bussing staff from these other firms from as far away from Scotland and North Yorkshire. This is work right on our doorsteps, that we could do if they would just let us go back to work.

I am bereft. I am a 53-year-old guy who has been on the railways for more than 30 years. I can build bridges and I know how to blow bridges up but I am too old for that now – I’m hardly going to be going out to Afghanistan am I? I can lay two miles of track in a weekend and the public wouldn’t even know about it. It’s what I do and they are telling me they don’t want me anymore.”