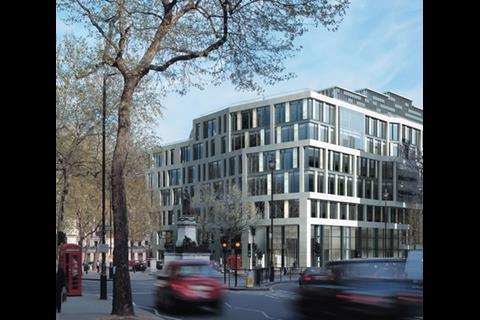 Although no high-profile London schemes have been cancelled, the 300,000ft2 office development 190 Strand has been quietly dropped. 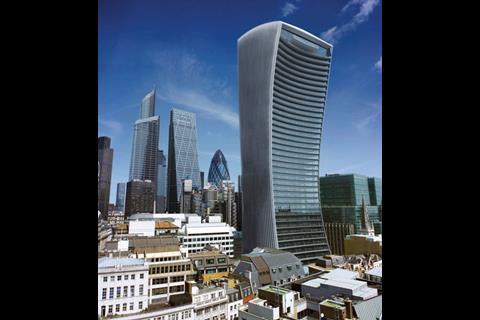 The Walkie-Talkie tower has been unaffected 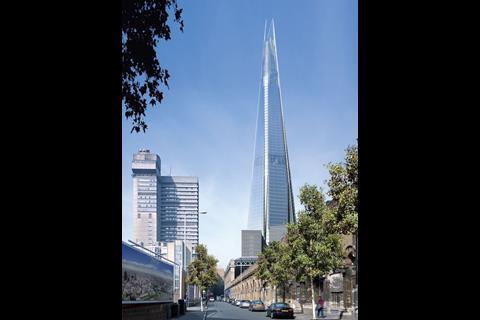 The Shard is having to address shortfalls in funding.

Business might well be ballooning for the UK’s top 250 consultants, as our cover suggests, but the global credit crunch has led some well-informed voices to predict a slide in demand, particularly in the London commercial market. Stephen Kennett looks at whether they’re right

Across the capital, developers are locked in discussions with their backers trying to make sure their schemes survive the credit crunch that has swept financial markets. Although there have been plenty of rumours, particularly surrounding the Shard, designed by Renzo Piano and earmarked for London Bridge, no high-profile schemes have been called off. According to one source though, it is only a matter of time: “A few office jobs have slowed down and people are thinking twice. Things are getting more difficult and people are taking stock. It is quite likely that we will hear about a big scheme in trouble sooner or later.”

If figures from consultant Gardiner & Theobald (G&T) are to be believed, that time could be soon. Last week, it used a research paper to drop a large hint that all was not well with some highly leveraged developers. The report’s co-author, Gavin Murgatroyd, said: “A number of large commercial projects have stalled or been cancelled in London … That correction is likely to be exacerbated by the global credit squeeze, the impact of which will be felt more next year.”

For the big contractors such as Bovis Lend Lease, which recently said it had turned away more than £2bn of work this year, the prospect of a fall in demand may not be of immediate concern. But that could change if the market turns with a vengeance. G&T estimates that tender price inflation will fall from 6.5% this year to between 5% and 5.5% next. Even that is still well above inflation in the rest of the economy, and added to the general difficulty in filling tender lists, and now the difficulty of raising project finance, it will not be surprising if some financially stretched clients may decide to take a break.

G&T is not alone in its concerns. Peter Fordham, who compiles Davis Langdon’s cost data, says he will almost certainly be looking to re-forecast tender price inflation figures for 2008 within the next two weeks.

Three months ago, he was predicting a growth of 7% for Greater London. “My gut feeling is this will be brought down, not drastically, but probably to 6%,” he says. “The London market, particularly the office market, has been booming. This will probably top out next year rather than 2009. There is clearly a lack of confidence among developers.”

Although G&T and Davis Langdon are revising their predictions, EC Harris is reluctant to follow suit. It agrees that some developers may step back and wait to see what happens, but it isn’t expecting to re-forecast. “I would be very surprised if tender prices fall. We’re predicting inflation of 6.5% over the coming year in London,” says Paul Moore, head of cost research.

This view is shared by Gleeds. It said: “A major influence on tender prices in both the short and mid term in our view is the shortage of skilled labour. This is pushing up costs and we can’t see this changing in the foreseeable future. It is true that the credit crunch is affecting the timescales in which work is awarded, but we’re not pessimistic.”

Evidence for a slowdown

According to G&T’s Murgatroyd, there have been a number of London schemes shelved or put on hold in recent months. Although buildings like 20 Fenchurch Street (aka the Walkie-Talkie) should be safe, others have already stalled. For example, 190 Strand, a 300,000ft2 office scheme for Prudential and Capital Counties has been quietly dropped in its current form after rising construction costs made it unviable, as was a dealing floor fit-out for a bank in Canary Wharf. “It’s the financial services sector that is starting to put things on hold,” says Murgatroyd. “But you’ll also see the marginal debt finance deals – the ones who have borrowed heavily – dropping away.”

The situation in the services sector, which covers everything from hotels to banks, and provides construction with most of its commercial clients, was described in a report last week by the Chartered Institute of Purchasing and Supply. It found that growth in the sector hit a 13-month low in September (56.7 on its index, compared with 57.6 the previous month). Although anything above 50 represents expansion, the report says it reflects weaker growth in financial services.

It’s the financial companies that are starting to put things on hold. But you’ll see the marginal debt finance deals – the ones who have borrowed heavily – dropping away

“A lot of financial instutions will be sitting tight,” says Luke Thompson, senior economist at NTC Economics. “Depending on how long this lasts, it may filter down to other sectors.”

NTC’s report into construction recorded a six-year low in confidence levels. “This suggests that the turmoil in the financial services market is having a knock-on effect,” says Thompson.

Work has also been slow to get going on the £350m Shard. It has been revealed that developer Sellar Property Group is in talks with potential backers to address shortfalls in funding, which has partly been attributed to the credit crunch. The developer insists that work is still on track, but construction is stalled while the situation is resolved.

Property consultant Savills has reported the weakest rise in commercial activity for seven months. “Credit crunches and the rising cost of money have affected confidence this month,” says Mat Oakley, head of Savills’ commercial research department. “With the increasing likelihood of a fall in base rates in the next six months we expect confidence to pick up. However, this is unlikely to occur until availability of debt begins to improve.”

The view from the contractors

But contractors, for the time being, are reporting a buoyant market. This is particularly the case among the big players, who are still experiencing high demand for services. Bovis is seeing tender price inflation of 6.5-7% and isn’t predicting any drop-off. “We see that being carried through into next year,” says Julian Daniel, head of its UK southern region. “It’s spikey, but there are certain packages where it is well above 7%, particularly cladding, steel and M&E.”

Tony Pidgley, chief executive of Berkeley Group, says September has been a satisfactory month and that October has started well. “As for a drop in inflation figures, I don’t agree with that. We’re not slowing down any development.”

So should contractors be taking heed of the warnings coming from the revised tender price forecasts? “This is a downshift before it climbs again in 2010/11,” says Murgatroyd. “London is the boilerhouse for commercial property in the UK and it heats up and cools down. If major developers are finding a lack of demand in London they’ll concentrate on other areas.” Yorkshire, Humberside, Leeds, Birmingham and Manchester are all buoyant.

But if the commercial market does cool, contractors have other work streams to fall back on. The Building Schools for the Future programme is worth £3bn over the next decade, and Crossrail will start in 2009. “You can expect to see boom towns cropping up around the Crossrail stations,” says Murgatroyd. After that the 2012 Games will begin to kick in. So it’s not all doom and gloom – but contractors would be wise to prepare for a chilly winter.