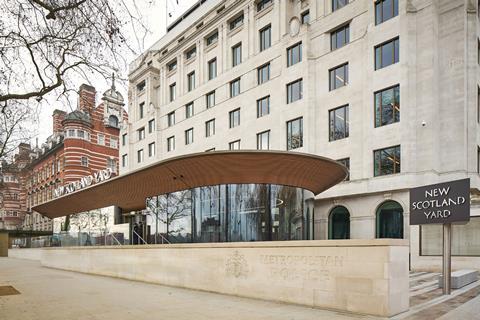 Buildings rarely come more iconic than New Scotland Yard. But despite its notorious name, the classical 1930s block in which it now sits and the nostalgic overtones of its revolving sign, the world’s most famous police station occupies a new home that is at the very forefront of cutting-edge technology and design.

The move from nearby 1960s offices to a refurbished building that sits beside the Yard’s original home has occasioned a project celebrating history and pride but in a robust contemporary manner. The judges were almost unanimous in this vote. They described the building as “simple and calm but, at the same time,
elegant and confident”.

This Wilkinson Eyre-designed commercial block had to conform to the context and streetscape of a high-profile historic location in the City of London. It did this by revealing a Portland stone facade sympathetic to its classical neighbours but incorporating state-of-the-art office space within.

This twin project in London is marked by innovative collaborations: it features three celebrated architects, includes new-build and refurb elements, provides a combination of residential and cultural uses, and developed a funding vehicle where the museum was financed by private luxury housing.

The brief called for a workplace that inspires greater creativity and innovative ways of working. The Wilkinson Eyre-designed building in Wiltshire responds with a series of minimalist pavilions that sit within the landscaped natural environment and promote wellbeing as well as commercial requirements.

The accommodation at Ulster Hospital in Belfast, designed by Avanti Architects and Kennedy Fitzgerald, sets a benchmark in inpatient care. The six-storey block provides 30,000m² of modern healthcare services across 12 wards.

This mixed-use scheme in a small courtyard in London’s Covent Garden adopts a novel approach to restoration and ornamentation. The scheme, designed by Ian Ritchie Architects, provides exemplary modern accommodation and further enhances the public realm of an already thriving district.

This building provides an exceptional new space the University of Huddersfield. The broad and complex brief for architect AHR was to provide a wide range of facilities including classrooms, offices, language labs, four 300-seat lecture theatres and a law court – all within a single building of almost 8,000m².

This building acts as a showcase academic hub for teaching, research, innovation and student achievement. It announces its purpose through dramatic architectural aesthetics with a large, red-gloss elliptical pod in the centre of a full-height, fully glazed atrium. Conceived on a civic scale, the six-storey atrium also features a three-storey digital video wall.

The extension to Tate Modern was one of the most anticipated London cultural projects of 2016. Providing extra exhibition space to the world’s most-visited modern art gallery, the building’s spiral form - designed, by Herzog & de Meuron - is already a familiar local landmark in the capital.

Part of Allied London’s massive Spinningfields redevelopment in Manchester, this take on the future workplace had three objectives: to create a flexible and adaptable scheme, to provide affordable units for smaller local firms, and to design an overtly contemporary building.