The past 12 months have seen Ryder Architecture receive glowing reviews from its clients in its biannual client feedback surveys. Not only did the practice receive an average overall satisfaction rating of 9.56 out of 10, but its clients also said the likelihood of it receiving a referral from them was almost 94%. In the past year 32% of the firm’s work has been in the healthcare sector, including the redevelopment of Whipps Cross Hospital in London. Other standout schemes include its Dogger Bank project, which has a net zero focus. 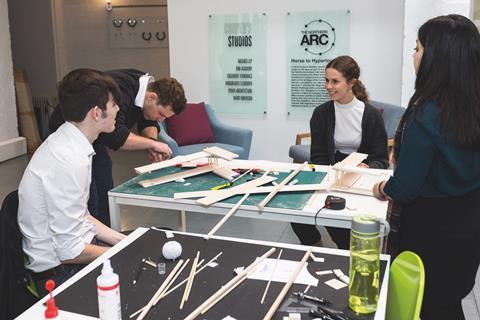 Over the past year Allford Hall Monaghan Morris won planning permission for 15 schemes across the UK. Significant among these consented schemes are a number across London, including plans approved by Westminster council for Lansdowne House, a new office building on historic Berkeley Square in Mayfair. Camden council also green-lit designs for Belgrove House in King’s Cross, a new-build specialised laboratory and office building for the life sciences sector, to be occupied by MSD as a UK headquarters and research centre.

In the past 12 months Assael Architecture has delivered 855 build-to-rent properties, while it has 1,403 homes under construction and another 2,807 that have gained planning consent. The firm’s level of customer satisfaction is clear, with 79% of its work coming from repeat clients. The practice’s commitment to its staff is shown in it being a founder of the Architects’ Mental Wellbeing Forum, on which it has three representatives helping to share knowledge and improve mental wellbeing industry-wide.

High-profile schemes completed by Buckley Gray Yeoman in the past year include 101 New Cavendish Street in London and retailer Fred Perry’s new outlet in Paris. In 2020 the practice established three new employee-led forums – on sustainability; equality, diversity and inclusion; and practice culture. This led to a sustainability toolkit being published in September 2020 as well as a company-wide diversity survey that was completed in November 2020. The practice also expanded its interiors team, which now has 11 staff, and has won work with new clients in the UK, Europe and Russia.

With a focus on sustainability, HLM Architects is striving to become a leader in MMC, digital tools, design innovation and zero carbon practices, as exemplified in several schemes it has worked on over the past 12 months. These include a £150m building to house both the Royal Hospital for Children and Young People and the Department of Clinical Neurosciences for NHS Lothian, as well as the £90.6m James McCune Smith Learning Hub for Glasgow university. The practice also worked on MMC and sustainability-focused schemes at Dinton Activity Centre and Addington School.

The past year has seen HTA Design reach new heights, completing Ten Degrees in east Croydon for Vision Modular Systems – at 44 storeys, the world’s tallest modular building. The 546-home scheme went from design concept to completion in just 40 months, with a measured 40% reduction of embodied carbon. West Green Place, Pocket Living’s largest scheme to date, also completed. The practice’s level of client satisfaction is evidenced by 83% of its work over the year coming from repeat business.

JTP made strides in implementing its objectives on revitalising high streets and town centres, delivering modular buildings, committing to deliver zero carbon projects and improving building safety. This, in turn, helped the practice secure new work in the UK and overseas. The past year also saw the firm reach numerous milestones in completions, planning approvals and projects starting on site, including the Nicholson Quarter in Maidenhead, which has been approved, and Lewisham Exchange in London.

In the past 12 months Patel Taylor has worked on notable schemes across civic buildings, estate regeneration and hybrid projects, including the creation of new council offices for the borough of Ealing, Countryside and Kingston council’s regeneration of the Cambridge Road Estate, and Canary Wharf’s Wood Wharf scheme. The firm also developed a modular facade system of storey-height glazed double- and single-bay precast panels that minimises waste and time on site.