Celebrating the area’s rich history of innovation, the renovation of the 1721 Museum of Making in the Derwent Valley Mills Unesco World Heritage Site has saved an iconic public asset regarded as the world’s first modern factory. The scheme has brought the whole building back into use for the first time in 50 years. During construction, workshop spaces were prioritised to enable early handover and so that members of the public and volunteers could take part in the fit-out. 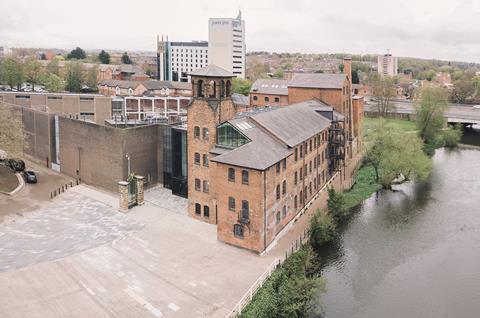 ust before Christmas 2020 – six weeks ahead of schedule, despite covid-related pauses during the first half of the year – Sir Robert McAlpine’s special projects team completed the restoration of the Royal Albert Hall’s iconic facade, bringing to a close eight years of work. Building sustainably was always going to be key to the scheme, with an example being the fact that pipework which had been used as temporary heating in the first phase went on to be repurposed as part of the permanent cooling system.

The 77 Coleman project is a sustainable and commercially sensible development that sets a standard for the reuse of existing commercial buildings in the City of London. Asked to redevelop it for a new generation of tenants, Buckley Gray Yeoman saw that making the building more permeable would raise its profile, giving it presence on two major thoroughfares. While the finished building feels new, it has retained 78% of the original concrete frame including the foundations, equating to around 13,200 cubic tonnes of concrete.

Entered by Ridge and Partners

In this renovation and remodelling of a complex of eight 600-year-old listed buildings for Lincoln College in Oxford city centre by Ridge and Partners, fire safety was a top priority, with the solution deemed to be the introduction of new stair cores with a clear wayfinding path. The project scope included new en-suite student accommodation, two new restaurants, four luxury apartments, improved access, extensive conservation works to the listed buildings, and rewiring and replumbing the entire buildings with existing tenants in occupation.

Nottingham Castle has been transformed by this £31m redevelopment, completed in October 2020. This landmark project involved the collaboration of many specialists, including G F Tomlinson, to achieve successful completion. The result is a transformed castle that enhances the heritage and history of the city, complete with a visitor centre, cafe and outdoor seating. The scheme has helped realise Nottingham Castle’s vision of attracting more than 400,000 yearly visitors.

The brief for The Archway from client Bath and North East Somerset council covered the refurbishment of three existing buildings and an undercroft beneath the road. Logistics were a challenge for Beard, given the constrained site within the city centre which meant no vehicular access was allowed after 10am. All materials were delivered through double doors at street level, dropped into the ground floor lay-down area, then manoeuvred through into the main undercroft. Most activities were completed by hand, including the placing of concrete and limecrete.

The Mayfair Townhouse has been altered many times over the centuries, so achieving the requisite co-ordinated design, crossing property lines, pushed BIM and Revit to their limits. The result is a hospitality renovation that proves the historic buildings of old London can be reimagined using new technology. The project provides a glimpse into the past, but with added contemporary interventions.

The Senate House renovation brings together new student social and support services for Bristol university. Originally constructed in 1961, the Senate House holds a prominent position on the campus, and Feilden Clegg Bradley Studios’ adaptation through a double-height extension to the entrance and courtyard adds floor area and provides space for the building’s uses to continue to develop.