Sponsored by Steel For Life

Costing Steelwork is a series from Aecom, BCSA and Steel for Life that provides guidance on costing structural steelwork. This quarter provides a market update and updates the five cost models previously featured in Costing Steelwork. 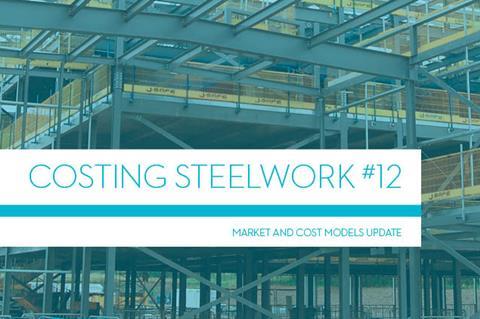 UK business sentiment indicators act as a clear reflection of the economic and political uncertainties generated throughout 2019. Business surveys almost universally report dented confidence, with uncertainty increasing towards the end of the year as a UK general election was held. The CBI reports on-going weakness in investment plans and weak prospects for exports. A resolution to the UK’s exit from the EU is hoped to lift some of the fog.

A flat GDP run-rate indicates a lukewarm assessment of the UK’s economy. Brexit is the overwhelming issue mentioned as the reason for sluggishness. A stockpiling push in early Q3 2019 helped trading and economic activity across the UK but this was not to the same extent as that which took place in Q1 2019 ahead of the first Brexit deadline. Despite everything, UK GDP has shown resilience. Without doubt, Brexit is a handbrake to economic and construction activity.

Headline construction new work output posted a modicum of growth in Q2, followed by a reversal and slight contraction in Q3. Current headline output levels equate with an industry near a long-run average output level. The key question is the direction of the output trend now, particularly given the economic and political backdrop. Similarly, new orders recorded little movement in Q3, posting 0.3% growth quarter‑on‑quarter.

Sterling’s path is linked directly to the UK’s story of exiting the EU. Overwhelmingly, the rising and falling likelihood of “no deal” at various points through the year drove the larger movements. This dynamic will continue in 2020. Towards the end of 2019, a trade-weighted sterling index was still within the range plotted since 2016. But it has sat at the top of this band lately in response to some Brexit deal-related optimism. Sterling’s fluctuations will continue to influence the rate of cost change for building materials costs.

Direct cost impacts are regularly the focus of attention in Brexit-related discussions and commentary. Tariffs are often the headline consideration. But when Brexit occurs, and should there be any additional friction from non-tariff barriers at UK borders, then this factor will become a considerably larger issue in the management and delivery of construction projects where the materials and components are imported.

There will be on-going localised pricing spikes though

Aecom’s composite index for building costs – comprised of materials and labour inputs – rose by 3.5% over the year at Q3 2019. Further increases to the end of the year were expected by much of the supply chain, but some weakening of this view is evident now on the back of marginally slower yearly growth in materials costs. Existing workload, planning for next projects and challenges securing trade resources will keep some of the commercial pressures on for supply chain firms but with less intensity than in recent years. There will be on-going localised pricing spikes though, where UK regions are still experiencing high activity.

Supply chain capacity across the UK construction industry opened up through 2019. The movement is notable and changes can be expected in response to adjustments in overall sentiment, activity and output. Recruitment for non-site skills and disciplines softened too, but without going into outright reverse. A pause here is understandable and correlates directly with the broader period of slower economic activity across the UK economy.

Changes in capacity utilisation measures are leading to labour wage changes, with an aggregate measure of site labour wage rates increasing by just under 3% annually in Q3 2019. This is softer wage growth than that seen earlier in 2019, when it ranged between 4% and 6% year-on-year.

Tender prices increased by 2.8% over the year at Q3 2019. The principle drivers of price inflation remain in place but with softer underlying trends. Supply chain pricing, input costs (labour and materials) and some necessary risk allowances are all still in play as drivers of inflation. Notably, preliminaries are lower over 2019.

Aecom’s baseline forecasts for tender price inflation are 0.9% from Q4 2019 to Q4 2020, and then 1.8% from Q4 2020 to Q4 2021. Downside skew accompanying the forecasts is noticeably higher across the period. Assumptions underpinning the forecasts include output reverting to somewhere near a long-run average without excessive volatility; input costs higher than the general rate of consumer price inflation; and an orderly exit of the UK from the EU that generates some upside risks from a synchronised release of held projects.

Cost information is generally derived from a variety of sources, including similar projects, market testing and benchmarking. Due to the mix of source information it is important to establish relevance, which is paramount when comparing buildings in size, form and complexity.

Figure 3 represents the costs associated with the structural framing of a building, with a BCIS location factor of 100 expressed as a cost/m² on GIFA. The range of costs represents variances in the key cost drivers. If a building’s frame cost sits outside these ranges, this should act as a prompt to interrogate the design and determine the contributing factors.

The location of a project is a key factor in price determination, and indices are available to enable the adjustment of cost data across different regions. The variances in these indices, such as the BCIS location factors (figure 4), highlight the existence of different market conditions in different regions. 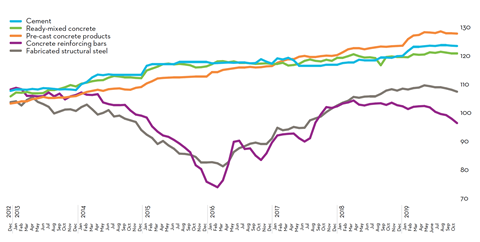 These five projects were originally part of the Target Zero study conducted by a consortium of organisations including Tata Steel, Aecom, SCI, Cyril Sweett and the BCSA in 2010 to provide guidance on the design and construction of sustainable, low- and zero-carbon buildings in the UK. The cost models for these five projects have been reviewed and updated as part of the Costing Steelwork series. The latest cost models as of Q4 2019 are presented here.

Below is an update to the offices cost comparison originally published in the Costing Steelwork Offices feature in Building magazine in April 2017.

Two structural options for the office building were assessed (as shown in figure 5):

The full building cost plans for each structural option have been reviewed and updated to provide current costs at Q4 2019. Movement has continued to be relatively static from Q3 2019. The costs, which include preliminaries, overheads, profit and a contingency, are summarised in figure 5.

The cost of the steel composite solution is 7% lower than that for the post-tensioned concrete flat slab alternative for the frame and upper floors, and 5% lower on a total building basis. 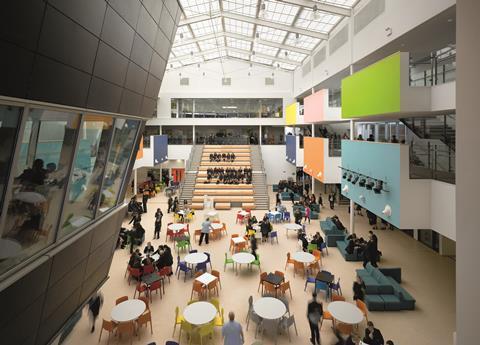 Below is an update to the education cost comparison originally published in the Costing Steelwork Education feature in Building magazine in July 2017.

Three structural options for the building were assessed (as shown in figure 6), which include:

The full building cost plans for each option have been updated to provide current costs at Q4 2019. The comparative costs highlight the importance of considering total building cost when selecting the structural frame material.

The concrete flat slab option has a marginally lower frame and floor cost compared with the steel composite option, but on a total-building basis, the steel composite option has a lower overall cost £3,143/m2  against £3,169/m2. This is because of lower substructure and roof costs, alongside lower preliminaries resulting from the shorter programme.

Below is an update to the industrial cost comparison originally published in the Costing Steelwork Industrial feature in Building magazine in October 2017.

The full building cost plans for each option have been updated to provide costs at Q4 2019. The steel portal frame provides optimum build value at £688/m2; glulam is least cost-efficient. This is primarily due to the cost premium for the structural members necessary to provide the required spans, which are otherwise efficiently catered for in the steelwork solution.

With a hybrid, the elements are from different suppliers, which raises the cost. The northlights option is directly comparable with the portal frame in relation to the warehouse and office frame. The variance is in the roof framing as the northlights need more. Other additional costs relate to the glazing of the northlights.

Below is an update to the retail cost comparison originally published in the Costing Steelwork retail feature in Building magazine in January 2018.

Three frame options were considered (as shown in figure 8) to establish the optimum solution for the building, as follows:

The full building cost plans for each option have been updated to provide costs at Q4 2019. The steel portal frame provides the optimum build value at £2,616/m2, with the glulam option the least cost-efficient. The greater cost is due to the direct comparison of the steel frame solution against the glulam columns and beams/ rafters. A significant proportion of the building cost is in the M&E services and fit-out elements, which reduce the impact of the structural changes.

The northlights option is directly comparable with the portal frame in relation to the main supermarket – the variance is in the roof framing as the northlights require more. Additional costs beyond the frame are related to the glazing of the northlights and the overall increase in relative roof area.

Below is an update to the mixed-use cost comparison originally published in the Costing Steelwork mixed-use focus feature in Building magazine in April 2018.

The gross internal floor area of the building is 18,625m2. The 67m-high building is rectilinear with approximate dimensions of 74m x 15.3m.

Three frame options were considered to establish the optimum solution for the building:

Options 1 and 2 are arguably more typical for this building type. The base case structure is an unusual solution due to a decision to change the residential accommodation to office floors at a very late stage – time constraints precluded redesign of the tower block, hence the original Slimdek design was constructed.

This Costing Steelwork article produced by Patrick McNamara (director) and Michael Hubbard (associate) of Aecom is available at www.steelconstruction.info.

The data and rates contained in this article have been produced for comparative purposes only and should not be used or relied upon for any other purpose without further discussion with Aecom. Aecom does not owe a duty of care to the reader or accept responsibility for any reliance on the article contents.