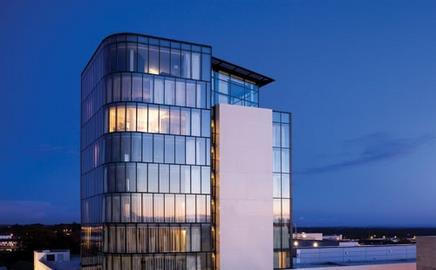 The standard, off-the-shelf system was supplied as four-sided, structural silicone-glazed panels that are genuinely curved – as opposed to faceted – around the corner between the two elevations. The design also included half-panels at alternate storeys.

One of the reasons the architects specified the panels was the lack of spandrels at the floor slabs, which looks better and makes it easier to replace the panels if they are damaged by a cleaning cradle. The subcontractor installed 12 units, or 36m2, a day and the whole contract took about 25 working days.