Continuing our series on difficult jurisdictions, Chris Hill explains how doing business in booming Kazakhstan has become much easier. That’s not to say it’s a walkover

Pivotally positioned between the economic powerhouses of Russia and China, Kazakhstan is the ninth largest country in the world and has one of the fastest growing economies in Central Asia.

It has enormous reserves of oil and gas and an abundance of minerals. The extraction and processing of these resources, notably oil and gas, has driven its economic expansion for over a decade. The government however wants to diversify the economy by developing other sectors such as transport, communications, trade, construction and real estate.

The president’s 2020 strategic plan aims to achieve sustainable economic growth through accelerated industrialisation and the development of infrastructure. Over the next five years a range of major projects will be commissioned, such as rail links, gas and chemical plants, mineral fertiliser plants, power plants and oil refineries, all of which could offer significant opportunities for UK consultants and contractors. 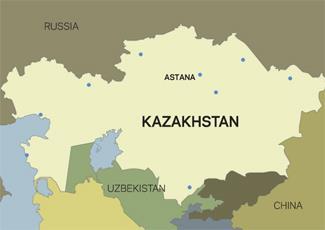 Doing Business 2011, the eighth annual report published by the International Finance Corporation and the World Bank, lists Kazakhstan as the most improved country in terms of its business regulation. (It moved up 15 places to rank 59th out of 183 world economies). Starting a business, obtaining construction permits, registering property, trading across borders and paying taxes have all become easier.

Nevertheless, foreign investment can be hindered by red tape. Construction activities are heavily regulated and likely to require a significant number of permits, licences and approvals from government bodies. The oil, gas and mining sectors in particular are tightly controlled, with the state retaining “rights of first refusal” over exploitation of natural resources or when the interests in a company licensed to exploit the subsoil are transferred. Foreign firms will require a great deal of patience as well as good local legal and financial advice to navigate their way through these challenges.

Businesses may establish a Kazakhstan legal entity that is either entirely foreign owned or co-owned with a Kazakhstan partner, or they may operate through a representative office or branch. Kazakh law is still relatively undeveloped when it comes to regulation of joint venture structures, and foreign investors should consider choosing English law (or an equally well established law) to govern their JV arrangement to reduce any uncertainty.

Registration requirements and the time periods for registration differ depending upon which legal vehicle is used. In every case, all documents provided by the foreign entity must be notarized and accompanied by a notarized translation if supplied in a language other than Kazakh or Russian.

The legal system is based on civil law and founded on a civil code which has been frequently amended in recent years to take into account the country’s rapid economic development. The court system consists of three levels, the Supreme Court, regional courts and local district courts. There are specialist financial, economic and administrative courts but no specialist construction court.

Kazakhstan is a party to the New York Convention on the Recognition and Enforcement of Foreign Arbitral Awards and a signatory to the Energy Charter Treaty, which provides investors with protection and the ability to seek remedies against member states through International Centre for Settlement of Investment Disputes (ICSID) arbitration. It has also concluded a bilateral investment treaty with the UK, which gives some protections and benefits to investments made by UK companies in Kazakhstan.

The Transparency International Corruption Perception Index ranking for Kazakhstan is 120th out of 178 countries. The government does, however, appear aware of the negative impact that corruption has on business and foreign investment.

In 2008 Kazakhstan acceded to the UN Convention against Corruption and in December 2009, its anti-corruption laws were amended to toughen the penalties for corruption crimes, criminalise the acceptance of bribes and broaden the definition of corruption to include fraud committed by government officials.

This article was originally published with the headline “Growing up fast”.