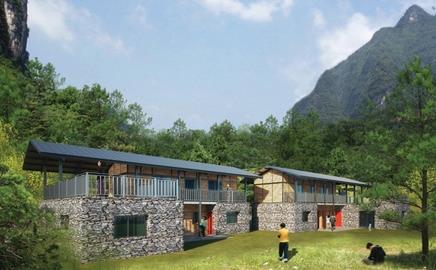 As eastern Asia counts the cost of yet another natural disaster, Roxane McMeeken reports on a British-designed housing system that needs no training to put together and could prove invaluable to the rebuilding process

The carnage caused by the tsunami in Samoa last month was a harrowing reminder of the devastation wrought by natural disasters, especially on poorer people. So far the death toll has reached 155 and thousands are homeless.

It can take years for communities struck by such events to return to a semblance of what they were before. For example, in China’s Sichuan province, which suffered an earthquake measuring 7.9 on the Richter scale last year, killing 90,000 people, millions remain homeless.

What these areas need are houses that can be built in a matter of weeks; that cost next to nothing; that can be put up without the need for power tools, cranes or even connecting roads; and that are capable of withstanding earthquakes, hurricanes and floods.

Fortunately, this is exactly the housebuilding technique that British architect Cartwight Pickard has created. The system, called NovoHouse, costs a tenth of the price of a normal home, takes three to six weeks to erect, and is in the process of being launched in the Dujiangyan region of Sichuan, which surrounds the provincial capital Chengdu and was at the heart of the disaster. James Pickard, director of the practice, says: “There are around 100 million homeless people worldwide. Factor in exponential population growth and you see we face a global housing crisis. This housing system could help address the crisis.”

The first three demonstration homes are being built and project-managed now by China-based steel manufacturer Baosteel in the village of Hongkou and they will house two families who lost their homes in last year’s earthquake. The developments are mainly being paid for by the Dujiangyan municipal government, and the developer Living Steel, an offshoot of the World Steel Council that promotes steel in residential building and asked Cartwight Pickard to come up with the design. There will also be contributions from the International Zinc Association as well as the families themselves.

So how does the blueprint work? The housing system is based on a kit of lightweight zinc-coated steel parts which can be assembled in a straightforward way by unskilled labourers, without the use of power tools, and which can be transported easily.

Pickard says: “The aim is to produce a Meccano set of components that can be put together by hand, so these houses can be built in places that do not have electricity or cranes. The components are made from light gauge steel, which makes the whole thing very easy to move, whether down a river in a canoe or on a donkey’s back.”

The kit can be assembled in different ways, allowing the building to be adapted to local housing traditions and climatic conditions. Pickard says: “This is not potato print architecture. The flexibility means you can house whole families in one room or several rooms – the kitchens and bathrooms can be added by local craftsmen.”

The demonstration houses have been adapted to specific conditions in Hongkou in several ways. As well as being on a fault line, the agricultural village is in a mountainous area with a heavy annual rainfall of 1,240mm. The result is a humid subtropical climate, reaching 29ÞC in summer and dropping to 3ÞC in winter. On top of this, the area suffers from some of the lowest sunshine levels in China, a greyness exacerbated by industrial pollution.

The NovoHouses here are designed to resist seismic movement through two approaches. First, their frames, being made from light gauge steel, will allow some flexing and can easily be cross-braced to prevent collapse. Second, they are built on a platform (approximately 3m x 3m) laid directly on the ground, which keeps the house clear of seismic movement below surface level. The lack of sunshine is addressed by designs that ensure that as much light as possible enters the buildings – for example, none of the roof options has an overhang that would block light.

To help the population benefit from the area’s growing tourist industry, the homes will also feature guest rooms, which can be rented to tourists. Also in keeping with local housing standards, they will be given an internal bathroom, mains sewerage facilities, running water, electricity and a wood-burning stove for heating.

To ensure that the homes match the vernacular look, the design includes outdoor living space, which is a common local feature. Cladding materials and tiles will be sourced locally and some materials, such as concrete, timber and masonry, will come from houses damaged in the earthquake.

The use of local cladding materials is among the elements of Cartwright Pickard’s blueprint that make it sustainable. Pickard says: “Sustainability was a major consideration throughout the design process. All the steel contains recycled content and is itself 100% recyclable.”

The NovoHouse concept also allows low-cost passive technologies to be incorporated into the design and the fact that the kit can be assembled without the use of electricity also helps.

Living Steel, which has the rights to Cartwright Pickard’s concept, is making the blueprint “open source”. Pickard says: “Any factory will be able to download the design.” It means factories producing the cold-formed steel components could be created anywhere.

For Cartwright Pickard, part of the benefit is that, despite being a £3m turnover SME, it is gaining an international presence. It was also paid a fixed design fee by Living Steel for producing the conceptual work and is being paid to advise on the later stages of detailed design development.

But Pickard says he is also doing it “partly for philanthropic reasons”. “It’s a great feeling to know that our hard work and expertise can be used all over the world to help people have a better quality of life. Simple things make a huge difference, and as a practice we are proud to be involved.”

How to build a Novohouse

What you must supply Roofing can be in the kit or from local sources, cladding must be locally sourced and could be made from handmade blocks, bamboo, timber or straw bales.

How you’ll be protected from natural disasters