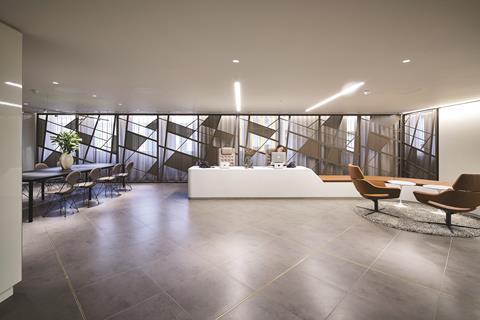 BW’s Old Bailey office, which it moved into back in September 2016

London fit-out and refurbishment specialist BW: Workplace Experts says it is hoping to hit the £250m turnover mark in a couple of years’ time as the firm looks to cash in on the capital’s booming interiors market.

Based at Old Bailey, close to the criminal court of the same name and next door to Paternoster Square in the shadow of St Paul’s Cathedral, around half of the firm’s business is for projects which are below £3m.

But BW says it is increasingly being asked to compete against larger rivals such as ISG and Morgan Sindall-owned Overbury for bigger jobs.

Its sales and marketing director Anthony Brown said: “On the very large projects, above £10m or so, consultants in the industry perceive that they would like more choice and so they’re pushing us very enthusiastically to be that choice.”

Its roll call of larger schemes is growing, with the firm currently working on four jobs worth above £20m – two of which are for occupiers at developer Argent’s King’s Cross scheme – and it is expecting to start on site fitting out the English National Ballet’s new home at Ballymore’s City Island scheme in Canning Town, east London, by the summer.

It has also landed a spot on HM Revenue & Customs’ fit-out framework, as the taxman consolidates its estate into 13 regional centres including two in London and the South-east at Stratford and Croydon – with the office in the south London borough at One Ruskin Square, built by Lendlease, the first to open last September under its new strategy.

Founded by former Royal Marine Mark Richards and Craig Foster, who started out as a QS back in the early 1980s, BW emerged in 2000 after the pair left fit-out firm Bellwater. In summer 2017 Richards and Foster sold the business to its management, stepping down as directors – although they retain a minority 40% stake.

Elliott said there had always been “a very informal agreement” for the directors to acquire the business and it “got to the point where they [Foster and Richards] wanted to exit”, adding that it was a “golden opportunity” to own and develop the firm.

This includes hiking revenue from an expected £150m last year by another £100m by 2020. Its financial year closed at the end of last month and is expected to see it post a pre-tax profit of £4m when its results are published later this spring.

“We don’t have the demands of a public company or hedge fund that force you to do things that go against your values. We could grow the business to £300m or £400m but that’s not where we want to be. We’re comfortable at a quarter of a billion,” added Elliott, who spent nearly a quarter of a century at Morgan Sindall.

In its most recent published full year results, the 200-strong firm posted a £100m turnover and £2m pre-tax profit for the 15 months ending December 2016.

But Brown said it wants more and added: “We’re keen to build the business to a size where we can roll with whatever’s going on in the industry.

The firm, which specialises in office and higher education fit-outs, says it has no plans to break out of its London and South-east stronghold into other parts of the UK.

Instead, the firm is looking overseas to borrow ideas and increase business, announcing last August that it had linked up with US turnkey construction company HITT for a global alliance.

BW had already struck a similar deal with Australian fit-out firm Shape the year before. Elliott said the aim of the alliances is to share clients, as well as innovation and development and to develop employees.

Founded in 2000 by Mark Richards and Craig Foster, who retain 40% stake

Forecast pre-tax profit of £4m for year to December 2017