This week we look back to the initial rumblings of the Construction Industry Board, later chaired by Sir Michael Latham, as this Building news story reveals 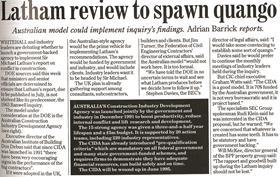 To mark the 20th anniversary of Sir Michael Latham’s report, Constructing the Team, we looked back into Building’s archive for that year and found this splash news story on page 7, 29 April 1994. The article quotes government sources as saying that ministers “are determined to ensure that Latham’s report, due to be published in July, is not shelved like its predecessor, the 1963 Banwell inquiry”.

To avoid such a fate the government was reported to be keen on borrowing from an Australian idea of having a construction development board to ensure Latham’s recommendations for resolving conflict in the industry were fulfilled. As predicted this did in fact happen after the formal publication of the report that summer with the setting up of the Construction Industry Board.
Building’s editorial column at the time was supportive of the idea but to make sure it worked in practice the magazine called for “a powerful, visible and experienced chief executive: that, of course, should be Sir Michael Latham.”

Sir Michael was duly appointed the first chairman of the board.