Get happy: Wellbeing in buildings

There is a strong body of evidence of the tangible ways that building design can improve wellbeing. Now an increasing number of major clients are realising that this is not just good for employees’ health - it’s good for business 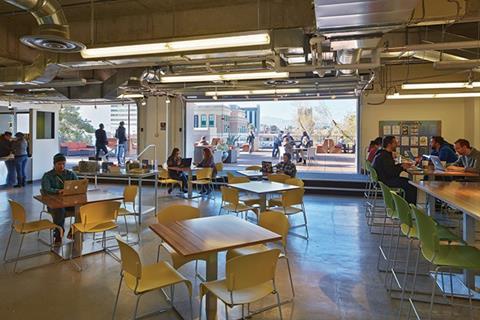 Communal space at work: The HQ of US online retail giant Zappos in Las Vegas, designed by Arup

To the uninitiated, “health, wellbeing and productivity” might sound like an alternate title for the “mind, body, spirit” section of Waterstones. Don’t be fooled: it’s an emphatically evidence-based discipline, with a watertight business case that makes low-energy construction look practically New Age in comparison.

There’s nothing new about the idea that buildings can affect occupants’ health - sick building syndrome has been discussed since the eighties, and there are already regulations to ensure reasonable indoor air quality on aspects such as ventilation and toxic chemicals. But over the last couple of decades, a growing body of evidence has shown that the design of building can have a far more subtle impact on the overall wellbeing of those who use it. Studies have found that hospital patients with views of nature healed more quickly, that office workers with a window seat sleep an average of 46 minutes longer per night and that doubling the supply of outdoor air to an office reduces short-term sick leave by 35%.

Not everybody cares about carbon and energy, but who’s against health and wellbeing? Who doesn’t want to be seen to be pushing that agenda?

Last year, the World Green Building Council brought all of this together in a landmark publication, “Health, Wellbeing & Productivity in Offices, the next chapter for green building”. It presented evidence on a range of factors including air quality, lighting and thermal comfort, but also layout, the look and feel of a space, and contact with nature. It then proposed a framework that organisations could use to analyse how their own premises were affecting their staff. It was an instant hit, backed by JLL, Lend Lease and Skanska, and enthusiastically embraced by industry clients including British Land, Tishman Speyer, Stanhope, Grosvenor, Sky TV and Marks and Spencer.

Perhaps that’s not surprising given that wellbeing is a much more attractive message than the abstinence typically preached by the green movement. And in contrast to climate change, it’s something that individual organisations can actually do something about. “When you’re talking about health and wellbeing, it’s almost immediately positive because you don’t have to spend that much to get better results,” says Richard Francis, principal of The Monomoy Company. “Also, not everybody cares about carbon and energy, but who’s against health and wellbeing? Who doesn’t want to be seen to be pushing that agenda?”

So far, there’s been a lot of talk about sustainability’s “triple bottom line” but action has been overwhelmingly focused on the environment. Health, wellbeing and productivity shifts the balance towards the social and - compellingly - the economic too. Wellbeing is about much more than physical health, stresses Francis. “That’s part of it, but it’s not sufficient. Wellbeing is a step beyond - it’s feeling mentally engaged, inspired, having a sense that your employer is looking out for you.”

Apart from the sense of wellbeing that an employer gets from doing the right thing, there’s also a very strong business case for it. A frequently cited statistic is that energy bills account for about 1% of a business’ operating costs, while costs associated with staff make up 90%. It’s easy to see the impact that even a slight drop in absentee rates or employee turnover could have on profits.

If building occupiers have much to gain, owners and investors have even more to lose. Tenants can argue for lower rent if a building consumes a lot of energy - what if it could be shown to reduce employee performance? “Five years ago, most people didn’t know about the energy performance of buildings but now it affects their value. With wellbeing, the numbers are so much more significant to an organisation. This used to be at the bottom of the list for due diligence, but it’s increasingly making its way up.”

Wellbeing is likely to be market driven, believes John Alker, co-author of the report and director of policy and communications at the UK Green Building Council. But without more detailed research, there’s a danger that it could be reduced to a mere marketing tagline. “These are complex issues, so we need to be careful not to boil it down too much - you can have wellbeing but not be particularly productive, and you can be productive for short periods of time without being healthy. Without robust evidence, we won’t have the ability to prove whether a building is genuinely good for people’s wellbeing and what is good performance in relation to other buildings.” This is the next step for the UK Green Building Council, expected to be the subject of an announcement at Ecobuild.

In fact, companies have everything they need to at least begin analysing the impact of their building on performance: the building’s complaints log, HR data on sickness or absence, and financial data on the performance of teams in different offices. “This is information which every organisation already has, or could easily get,” says Francis. 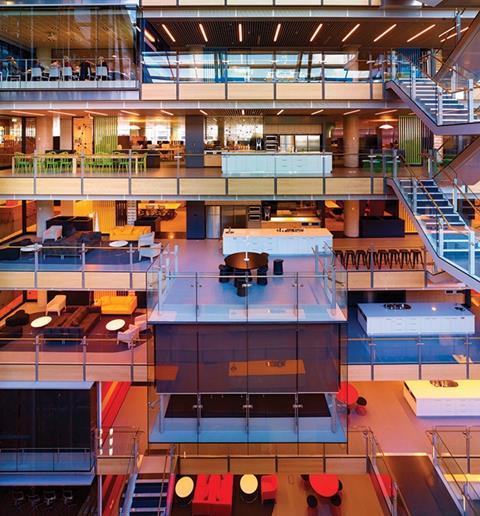 A green first: In 2013 the Green Building Council of Australia awarded Lend Lease’s Common-wealth Bank Place a 6 Star Green Star. It is credited with providing a healthy and productive workspace

Getting a true picture of wellbeing means using more qualitative data too, typically from staff surveys. “You can tap into attitudes which aren’t necessarily going to show up at all, or only show up down the line when they get much worse. People say things like ‘I find the office uninspiring’. We might ask ‘are you proud to bring visitors to the office?’ or ‘do you think the office reflects the corporate values?’ - you’re never going to find the answers by looking at air quality.”

Elina Grigoriou is design director of Grigoriou Interiors and founder of the not-for-profit Feeling Good Foundation, set up to promote research on wellbeing in the built environment. She is researching a book that aims to provide a reasoned basis for design decisions on wellbeing: “There is no ‘best’ interior, it depends on the user. The ultimate target is to create a harmony between the occupant and the space.” So is it a science or an art? “There is an explanation behind using a particular colour or a piece of furniture, and people are beginning to realise that interior design is not just about having a bit of fun with colour.”

As the industry amasses data and case studies, Grigoriou believes it will become possible to be more exact about how design contributes to wellbeing. “We can’t yet say that using five curved shapes and two angular ones gives you this level of productivity, but I like to think we’ll be there in five years.”

The real past masters at this kind of analysis are of course retailers, and they’ve also spotted the opportunity. Leading the pack is M&S, under its Plan A sustainability strategy. Last June, it committed to carry out a study into the “health, wellbeing and associated commercial benefits of sustainable retail buildings” and apply the lessons by 2016. The impetus came from a post-occupancy evaluation of its Cheshire Oaks eco-store, which revealed that it was not only outperforming its environmental targets but that customer and staff satisfaction, and sales, had risen.

“We realised that we were probably underestimating the total business case for sustainable building, and that we should take health, wellbeing and productivity into account,” says Zoe Young, Property Plan A project manager at M&S. “If we can prove the hypothesis, we can go to the decision-makers and say not only is a building going to be X% more efficient and cost less to run, but it’s going to be X% more profitable because of the design. We want to use that to influence the retrofit of existing shops and the design of new shops across the world.”

Retailers already compile masses of data that could feed into this, she adds, from footfall surveys and CCTV to loyalty card schemes and customer feedback. M&S hopes to collaborate with other organisations on the research, and will reveal more about the plans at Ecobuild.

There is not necessarily a perfect correlation between a lower energy building and one that improves wellbeing. There are some easy wins: more daylight means less artificial light, and comfortable occupants don’t tend to override carefully chosen setpoints or light settings. A building people enjoy being in is also less likely to be knocked down before the end of its design life. But there could also be perverse outcomes: if the business case for the comfort of employees is so powerful, what’s to stop employers racking up massive energy bills to create the perfect, most profitable, working environment? “We can’t have a conversation about this in isolation from sustainability,” says Alker. “The challenge is how you meet both objectives at the same time.” He points out that the WELL Building standard, developed in the US, is designed to be compatible with existing sustainability rating tools.

Wellbeing potentially goes much further than current standards. On walking into a WELL-certified building, the first thing you’d notice would probably be the lighting - not just more daylight, but better quality artificial lighting that changes throughout the day to match humans’ circadian rhythms, says Ann Marie Aguilar, associate director of Arup Associates, who is a provisional WELL accredited professional. “The air quality would feel different, there would be much greater availability of fresh water and really good quality food. There would be much more focus on the individual and a more ergonomic environment.”

Her colleague Mallory Taub adds: “Principles that might have been standard practice for hospitals, on ventilation and water filtration, are becoming business as usual. Product suppliers already have to notify users about the amount of recycled content, and there will be a further dive into the chemical components of products. It’s a wake-up call on a whole other level.”

But if productivity provides an economic rationale for all this, it can’t be the only driver, she says: “We don’t want it to be about just trying to get more productive people in the big machine. It’s got to be broader than that, giving people a sense of general wellbeing, the opportunity to be the best they can be.” 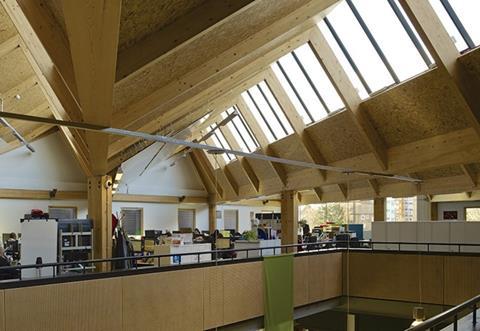 Seeing the light: Black Architecture’s brief for the HQ for the Catholic Agency for Overseas Development (CAFOD) in London included promoting wellbeing. It features social interaction spaces, natural and mechanical ventilation and windows that allow light to penetrate deep into the building without unwanted solar gain

Occupier wellbeing: How do we measure it and what does it mean for the property industry?
Wednesday 4 March
12.00 - 13.00