Power in the Union

It seems increasingly possible that the UK will vote to leave the EU in 2017. For many sustainability professionals, this would be a nightmare scenario

Two years from now, the UK could be teetering on the brink of “Brexit”. That’s when prime minister David Cameron has pledged to hold a referendum on Britain’s continued membership of the EU - assuming of course that the Conservatives return to power after May’s general election. While recent opinion polls show a shift against withdrawal, the continuing headway being made by Ukip means that the result of any referendum is hard to predict.

Few areas would be affected by a pull-out from the EU as much as green building. The entire edifice of measures to improve the sustainability of the UK’s built environment is underpinned by a structure of European legislation, designed to deliver the EU’s world-leading commitment to slash carbon emissions.

The most important of these requirements is the Energy Performance of Buildings directive, which is the key driver behind the government’s zero carbon target. It states that all buildings should generate nearly no carbon emissions by 2020.

John Alker, director of policy and communications at the UK Green Building Council, says EU directives have been “pretty key” to a number of initiatives including energy efficiency audits and energy performance certificates. 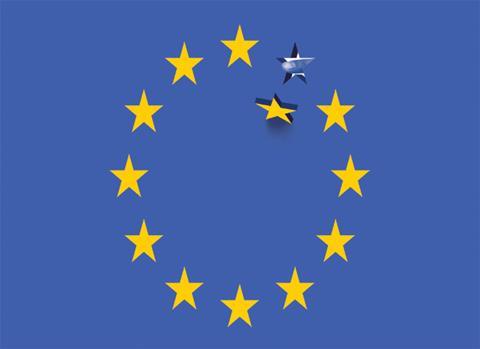 A baseline for action

Most sustainability champions are therefore understandably aghast at the mere prospect of a British withdrawal from the EU. Stunell says: “The EU provides a baseline for action, which has been vital for delivering improvements in new building standards. If we were disconnected from the EU, the pace of change would be threatened in the UK.”

It doesn’t sound like engineer Chris Twinn, of TwinnSustainabilityInnovation, will be backing Ukip at the next election either. “We will be totally lost. At the moment we have no effort or research going into carbon non-domestic. The government is doing nothing.”

Alker takes a less bleak view, pointing to how Britain has been ahead of the curve on many aspects of building sustainability. “There are policies where the UK has led, which have nothing to do with European policy. The classic one is zero carbon policy, which both in terms of homes and commercial buildings really predated EU policy.”

Alker also highlights the Green Deal, in terms of ambition if not necessarily delivery. He says: “It’s been trumpeted around Europe as being an innovative approach that others are trying to understand and copy.”

However, he acknowledges that even where the UK has blazed a trail, EU policy is rapidly catching up, with further progress dependent on the composition of the next UK government.

The green standard bearers in the Conservative party have either left the House of Commons, like John Major’s last environment secretary Lord Deben, or are just about to, such as Tim Yeo, current chairman of the Environmental Audit Committee. And their ranks are unlikely to be replenished by the current generation of Conservatives, among whom the green-minded MP for Richmond, Zac Goldsmith, stands out as an exception.

“The EU provides a basline for action. If we were disconnected from the EU, the pace of change would be threatened in the UK”

The government’s watering down of measures to meet the zero carbon target illustrates how its enthusiasm for the wider eco-building agenda has progressively waned over the lifetime of the coalition. Stunell says: “The reality over the last five years is that central government has always had to be dragged kicking and screaming towards higher standards, as we have recently seen with the discussions on zero carbon.”

For Stunell, ambivalence towards sustainability is intrinsically bound up with support for the EU referendum. “Any government that supervised or supported a withdrawal from the EU is likely to be unsympathetic to environmental measures.”

Andrew Warren, the recently retired chief executive of the Association for Conservation Energy, agrees that the zeal for implementing building sustainability has waned in Whitehall’s Tory fiefdoms. While he applauds the Lib Dem-led Department of Energy & Climate Change for generally delivering on the UK’s European requirements, the same is not true of the communities department. He says Eric Pickles’ department has not been cracking down on buildings that come on to the market without the requisite energy labelling.

Communities minister Stephen Williams insisted that the coalition government remains committed to implementing zero carbon standards for new homes from 2016 and for new non-domestic buildings from 2019.

Life on the edge

But perhaps most worryingly for the UK construction industry, Stunell warns that withdrawal from the EU will hit it in the pocket. “Leaving the EU would be suicidal for the country as a whole but would be very damaging for the building industry. It’s not just fancy German stuff being brought here. There’s also trade in the opposite direction, so erecting barriers between us and the rest of Europe would be undoubtedly harmful to the building industry as a whole.”

The irony of the debate, Stunell adds, is that the UK industry will almost certainly end up complying with EU standards, whether or not Britain votes to leave or not. This is what happens in those countries that belong to the so-called Common Area, such as Norway and Switzerland, which enjoy free trade arrangements with the EU.

“So many of our materials are EU standard, we are going to be left at the whims of what they decide to lob at us”

Warren , who describes this scenario as “regulation without representation”, observes tartly that Belarus and Moldova are the only European states that do not routinely implement EU building directives. “They are not the sort of country that Britain would normally want to bracket itself with, or that it aspires to emulate.”

Being locked out of the room when standards are being negotiated would mean that there would no longer be any chance of tailoring them to the UK’s relatively wet and windy conditions, for example, Warren says.

Twinn of TwinnSustainabilityInnovation says that this loss of influence will have particular ramifications for products such as thermal insulation and high-performance glass, much of which are imported from Europe. “We buy in so much of our kit, and so many of our materials are EU standard, we are going to be left at the whims of what they decide to lob at us,” he says.

A dry run for what this loss of influence would mean can be seen in the daily machinations of the European parliament. In a move that was widely seen as a sop to his Eurosceptic right, Cameron decided to withdraw from the main centre-right group of MEPs. Not having a say in what remains the Brussels parliament’s main bloc has already cost the UK industry influence within the EU, argues Warren.

He’s not the only one worrying that a future referendum would reduce this influence to zero.

Which political party is most likely to help drive a greener property sector after the election?
Wednesday 4 March, 10.30 - 11.30