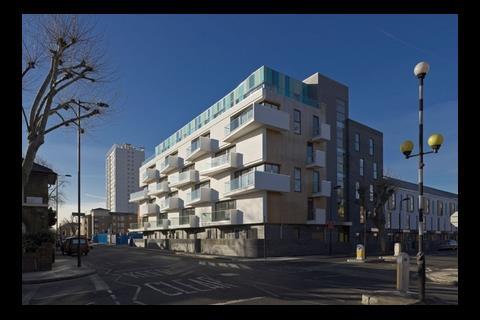 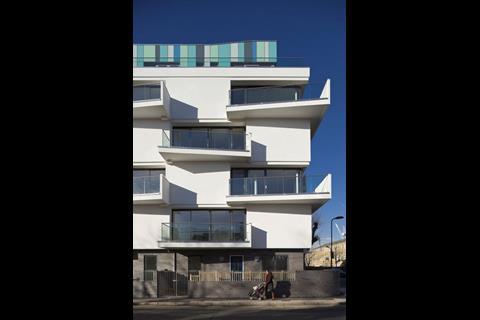 The balconies are angled to catch the sun 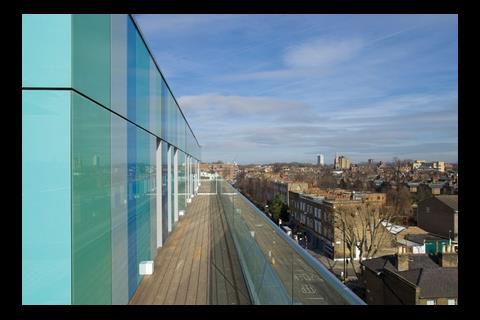 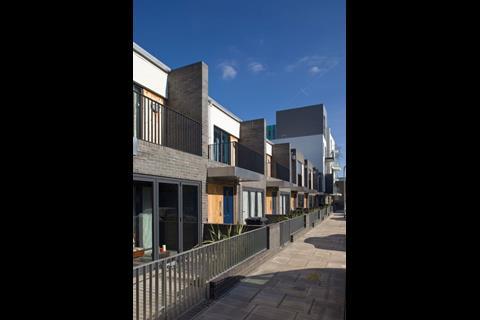 The two-bed units on New Road have a Dutch feel

Dalston, a less-than-glorious corner of east London, is beginning to look as if it might be able to tempt well-heeled Londoners to give it a go – thanks in part to Levitt Bernstein’s Mediterranean-styled Queensbridge Quarter

If the story of Holly Street were a book, it would be a Dickensian novel of redemption in the face of deprivation. Fans of Victorian literature will be pleased to note that it covers a suitably long timeframe: it started back in the eighties, when the Holly Street estate in east London was at the heart of Hackney’s Murder Mile. At that time, as many as 80% of the estate’s residents said they did not want to live there.

But during the early nineties, a kindly benefactor entered the tale. The Circle 33 housing trust, with the support of local housing associations, began a 10-year programme of regeneration, demolishing the seventies blocks and building a new Holly Street, with 1,000 homes mostly designed by local architect Levitt Bernstein.

By 1998, no less a figure than Tony Blair cited the scheme as an example of successful inner city regeneration when he launched the New Deal for Communities there. And by last year, the story of Holly Street was nearing an appropriately sentimental resolution, with 93% of residents telling Circle 33 that, given the choice, they would prefer to stay in the area.

Which brings us to the final chapter in the story – the Queensbridge Quarter, the first phase of which is now complete. Also designed by Levitt Bernstein, this is a restrained development of 151 units at the north-east side of Holly Street that tries to fuse modern European-style design with the vernacular of traditional East End housing. Architecturally, the Holly Street homes surrounding it is an uninspiring mix of brick buildings laid out in neatly proportioned grids. In contrast, the Queensbridge Quarter is a blast of fresh air, and in keeping with the forward-thinking nature of modern Hackney.

The approach to Queensbridge from busy Kingsland Road shows Hackney at a turning point in its 21st-century development. The East London Line station at Dalston Lane is under construction, and Barratt Homes is building an enormous £160m development at Dalston Square, designed by John McAslan and Arup Associates, ready for the City workers who will flock to the area once it is connected to the Tube.

Queensbridge Quarter is at the tipping point between the Hackney of old and this brave new world, and accordingly its architecture divides into two different styles. The units at the front end are apartments for modern urban living, complete with edgy angled balconies and an aquamarine strip at the penthouse level. But the units behind – mainly two-to-four-bedroom affordable houses – attempt something more familiar and domestic, organised around a traditional street layout. Despite this bifurcation, the materials link up to create a unifying feel. “They are different typologies,” says project architect Simon Lea, “but we wanted them to feel like they’re all one development.”

The flats first, then. Set on a “plinth” of blueish brick, the apartments at the front end of the building nestle right up to Queensbridge Road. There is a three-inch step leading up to the ground floor entrances, which are set out with a small walled porch large enough to keep bins on, but little else. Lea says the planners were slightly concerned at the elevation of the apartments at the front end, and it’s hard not to disagree. The buildings along Queensbridge Road are massed in various styles – a “mixed bag” is how Jo McCafferty, Levitt Bernstein’s director in charge of the project, describes it – but the Queensbridge Quarter does almost overwhelm passers-by. Apparently the pavement is soon to be widened to help control the traffic, but until then the ground-floor users will no doubt feel as if their houses lead right onto the street.

The flats above, arranged in groups of four across, are more successful. Residents gain entry through side doors and enter from behind. The positioning of the balconies against the white rendered facade has been designed to allow each the maximum sunlight, but has the added advantages of giving a textured effect to the building’s front and setting it out from its neighbours. From inside, these market units are spacious and light-filled, as you might expect.

The penthouse floor is actually a metsec, a concrete frame clad in different types of glass. It is already occupied, so it is difficult to say what it’s like inside, but the coloured glass gives the building a Mediterranean-style crown. McCafferty says the intention was for the penthouse to “float above” the rest of the units. “The colours were intended to sit with the sky,” she says. “That bluey-grey palette on the reflective material would break up some of the uniformity in colour of the rest of the building. We like to think it has an art deco feel.”

The plinth at the front elevation’s base continues around the rest of the development. Along Forest Road, to the north of the development, are nine three-storey houses, unremarkable white rendered buildings that lead to a four-storey affordable apartment block at the north-west corner. At the Holly Street end of the block, the development drops down in levels from four to two-storey units at the south-facing side.

It is here, on the side by New Road, that the scheme really comes alive. These are the two-bedroom units, mainly affordable and populated by long-time Hackney residents. McCafferty says many of these residents were signed up to these apartments before design work had even begun. “Hackney involved the residents at nearly every stage, and the consultation was very thorough,” says McCafferty. “Almost too thorough,” adds Lea with a laugh. “It was almost a one-on-one consultation with each resident.”

The emphasis had to be on domesticity, and the result is an authentically quaint row of houses with small front yards and neatly partitioned identities. Each front door is set in a panel of untreated timber, with the same blueish brick giving a modern tint to the facade. With its low-rise, neighbourhood feel, it has something of the Dutch style about it. Inside, the houses – like every one of the 151 units here – have been designed to Lifetime Homes and Parker Morris space standards.

Each house has a french window facing the street behind which the architect has placed a sort of summer room between the sitting room and the outer doors. Residents can personalise this space with whatever they like, be it furniture or plants, or just their children’s toys. “There was a worry to begin with that people would use it for bin bags,” says McCafferty, “but it seems people have a lot more pride in their houses than that.”

That much is demonstrated by 87-year-old resident Betty Spinks, who happens to be at home on the day I visit. “It’s a smashing place,” she says, “Not like any other council house I’ve been to. The place looks so tidy, people don’t want to spoil it.” Spinks has been a resident in Hackney since she was born, and remembers the Holly Street of old. “It was the worst estate in England. You’d see rats in the gutters, cockroaches everywhere, and you couldn’t step out your front door at night. Here I feel safe.”

Queensbridge Quarter isn’t quite finished. The next phase will be to the south of the new development, again designed by Levitt Bernstein, and will carry on some of the architectural ideas of this one, making a proper residential street of New Road.

Despite the nifty directional balconies at the eastern end, the Queensbridge Quarter doesn’t seek to show off but blend in as part of the fabric of the East End. While the story of Holly Street may be coming to a close, the wider narrative of Hackney is set to continue, with the East London Line extension ready to bring wholesale changes to the community and the urban environment. It can only be hoped that when the developers return, they look to the humble achievements of this scheme when planning a next chapter of their own.

The client on the project was United House.