How the retail industry is cutting carbon 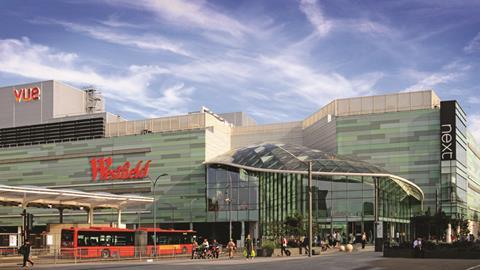 The retail industry is going through the worst of times. Uppermost among its woes is the beleaguered British high street, whose waning fortunes are a reluctant emblem for an industry battered by the twin contaminants of the recession and the internet. A report by management consultant Deloitte last year that predicted that up to 40% of high street shops could close by 2017 seems to be gaining grim credibility, with the sacrificial slaughter of famous household brands such as HMV and Blockbuster becoming commonplace.

Given such deep structural, economic and cultural problems, one might think that the pursuit of carbon savings and greater energy efficiencies in retail buildings may do little to help. Not necessarily so. “Of course the consumer isn’t going to notice many of the carbon saving measures we’re trying to achieve,” explains Pascal Mittermaier, head of sustainability for Europe, Middle East and Africa at Lend Lease, one of the UK’s biggest shopping centre owners. “But with rising energy prices, any savings we can make in how much energy retail buildings use will enable us to become more competitive with the leases we can offer potential tenants.”

This, essentially, is the commercial bottom line. While carbon savings will not by any stretch of the imagination be the biggest player in the resuscitation of the traditional retail shop format, increased energy efficiency in retail buildings can certainly contribute to the economic competitiveness and commercial edge
on which a healthy retail sector relies.

For Richard Francis, director of environment and sustainability at construction consultancy Gardiner & Theobold and member of the British Council of Shopping Centres’ (BCSC) Sustainability Committee, energy savings play an even bigger role in the current market and he offers a stark warning to those retailers who remain to be convinced: “Consumers use environmental performance to assess brand, and carbon performance is becoming more transparent. Energy prices are set to increase substantially and these costs eat directly into profits. Retailers ignore carbon performance at their peril.” 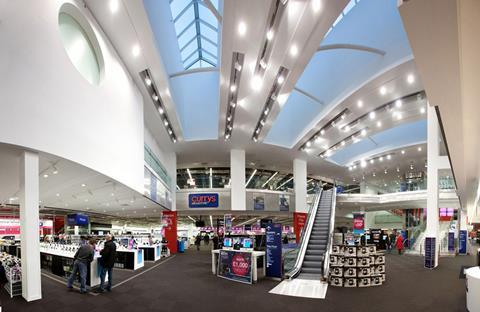 So how will shops and shopping centres achieve these carbon savings on a significant scale? Bluewater shopping centre in Kent, the UK’s fourth largest, may offer some clues as its owner, Lend Lease, plans to transform it into “Europe’s most energy efficient retail complex”. The 1.6m ft² centre has recently implemented an ambitious carbon savings programme designed to halve its massive £1.4m annual energy bill and reduce its 8,000 tonnes of carbon emissions per year, equivalent to that emitted by 14,000 homes.

The Bluewater scheme is based on a highly sophisticated analytical computer programme developed by software developer Sefaira. It analyses energy flows within the building to identify the areas that waste most energy. This data will then be used to devise a programme of retrofit upgrades and improvements to “unlock maximum savings at minimum cost”. Up to 50 interventions are being proposed and they range from fitting low-energy lighting to increasing natural daylighting or ventilation levels in specific locations.

With its use of fine-grain modelling to uncover the intricate detail of highly complex systems, the software works in a similar way to BIM. But according to Mads Jensen, chief executive of Sefaira, it offers a “level of forensic analysis” that goes beyond what is normally provided in standard BIM software.

Jensen also identifies two key benefits of the “groundbreaking” technology being deployed at Bluewater: “It provides the landlord with the confidence to know that any proposed retrofit will deliver real energy savings. And it also reveals the interdependent relationships between different interventions, which enables the landlord to map a phased sequence of improvements over time to extract maximum energy savings from the smallest capital investment.”

For Mittermaier, this concept of interdependency goes to the core of what Lend Lease is trying to achieve at Bluewater. “Achieving energy savings is like picking low-hanging fruit, after a while it becomes increasingly difficult to accrue meaningful savings. Also, measures taken in isolation are rarely truly effective - if you just replace older, heat-emitting light-bulbs with newer, lower-energy ones, the fact that you have a colder interior could actually lead to increased heating costs. The kind of integrated and holistic solution we’re proposing at Bluewater is the key. The process is cost and capital efficient - by taking a wider look at the relationship between each intervention, we’re able to use savings from the early steps we make to help realise more savings further down the line.”

Mittermaier also claims that this new interdependent approach represents a “quantum leap” with regard to retail sustainability and stresses that the overall Bluewater concept is driven by “project management rather than the facilities management approach that often determines how energy is saved from existing buildings.” 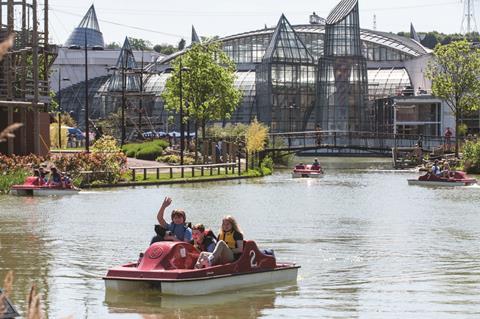 Bluewater shopping centre is the focus of a major software-led carbon savings plan to halve its £1.4m annual energy bill. Its original design already includes many sustainable features such as natural landscaping (above) and naturally lit atriums (below) 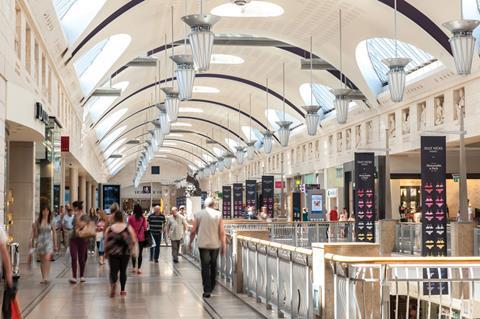 Bluewater is not alone in its voracious energy consumption; the UK’s 40 largest shopping centres consume a whopping £40m of energy per year. Therefore, across the retail industry , there is an onus on adopting more sustainable measures. Mittermaier concedes this will not be easy.

“The retail industry has a notoriously fixed approach and retailers are often extremely reluctant to implement changes for fear of scaring off the consumer. Most supermarkets for instance still refuse to put glass fridge doors on their cold cabinets which leads to huge energy bills and a massive carbon footprint.”

However, there is one significant corner of the retail industry that is striving for change and it is being led by the British Council for Shopping Centres. “Carbon savings are definitely becoming more of an issue within the retail sector” explains Helen Drury, BCSC sustainability and community engagement advisor, “especially with up to 60% of retail premises falling below the E-grade minimum energy rating that is going to be required by legislation by 2018. Of course there are serious structural issues within the retail industry at the moment and in these difficult economic times the retailer’s main priority is to stay open. But it boils down to the fact that a lean and efficient building is going to be more cost-effective.”

In 2011 the BCSC published a report entitled Accelerating Change: Towards Low Carbon Shopping Centres. Their follow up report last year, Cutting Carbon Cutting Costs: Achieving Performance In Retail Fit-Outs presented five simple recommendations for the industry: install metering, reduce time in which operational equipment is in use, install energy efficient lighting, reduce in-store temperatures and install fridge doors on cold cabinets. The findings were based on analyses of retail units of various sizes and types, from smaller outlets like bank and restaurants to larger complexes like shopping centres.

“The report was prompted by a lack of practical, realistic information about retail energy use” explains Drury “and by the huge performance gap between estimated energy usage at new-build stage and post-occupancy. There is sometimes as much as a six-fold rise between projected and actual figures. It’s also important to acknowledge that the vast majority of our retail infrastructure is already in place. Retrofit, rather than new-build, is the key. “

The results are particularly interesting in identifying a direct link between carbon and cost savings. A Co-operative supermarket saved £10,000 a year in energy bills by installing new lighting and fridge doors to reduce annual energy consumption by 30%. A new energy efficient branch of Waitrose was able to save £14,000 in annual energy costs by installing a heat recovery system to reduce gas consumption. And a branch of Dixons saved over £36,000 per year and cut electricity consumption in half by changing 128 of its 440W high bay luminaires to the same number of 4 x 45W fluorescent luminaires and installing an automatic light control system. 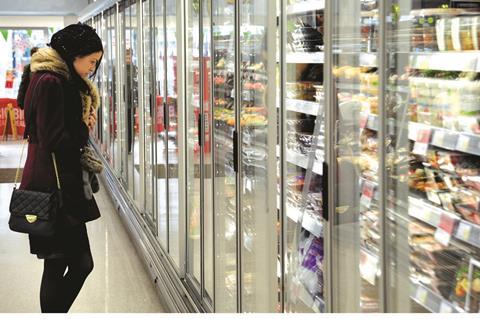 But the most surprising results were reserved for the seemingly innocuous Mall shopping centre in Camberley, Surrey. Of all the case studies, this required the smallest capital investment but achieved the biggest savings. Installing energy efficient lighting was part of the solution. But by far the biggest contributor to the centre’s 50% reduction in energy consumption was a review of employee practices, such as ensuring night guards no longer turned up for work early and introducing a traffic light system to monitor energy use. The cumulative benefit was a £180,000 saving in energy costs over a five year period.

“Our report proves that you don’t need a huge capital investment to deliver carbon savings in retail and that gives a tangible value to eco-buildings” explains Drury, “education and awareness cost nothing. Carbon savings alone will not save the retail industry. But it is becoming increasingly evident that they can help.” 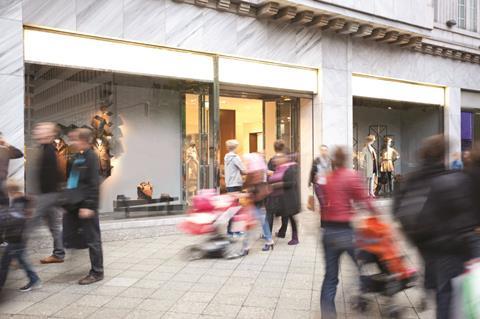 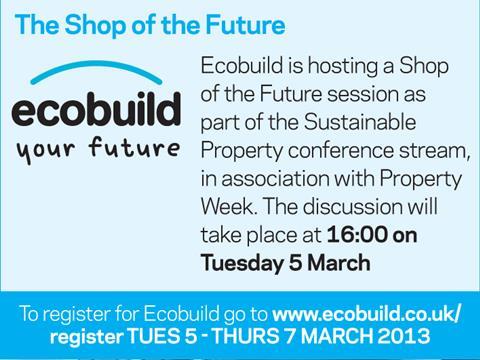