Architect appointed to design entertainment park in India, including cinema, food court and facilities for weddings 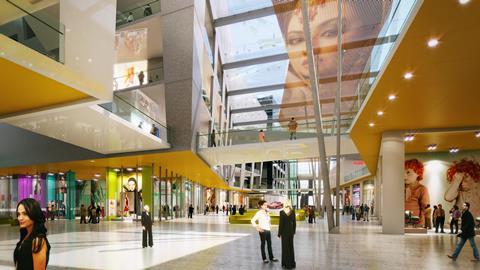 Architect Aedas has been appointed to design a 2.1m ft2 retail and entertainment park in Lahore, Pakistan.

The design is inspired by Pakistani jewellery design and craftsmanship.

Marcus Wilkins, Aedas divisional diector, said: “There has been an increase in demand for retail space in Lahore, essentially due to the large population increase and growth of diverse income groups. Aedas is delighted to play its role in helping the city to meet this demand as well as create a significant catalyst for the ongoing development of the area.

“The arrival of the scheme will form a striking backdrop for the area. The Aedas concept of colours, colours and textiles has been inspired by the rich jewelry design and craftsmanship that Pakistan is historically renowned for.  We thought this was particularly apt as Lahore is renowned as the cultural capital of Pakistan.”

Crystals forms phase one of the Expo site masterplan in the south western region of Lahore.

Start on site is scheduled for March 2013 and will be completed within a three year timescale.