3
How to fix an unfixable roof
Focus

How to fix an unfixable roof

The roof of the Commonwealth Institute had attained the status of an urban myth among London's roofing contractors, who told awestruck tales of leaks that no man could fix. Alex Smith finds out how it was finally sorted
If you ever visit the Commonwealth Institute in chi-chi Kensington, persuade someone to take you up to the copper roof and show you their hyperbolic paraboloid.

What you will see, looked at geometrically, is a series of swooping curves, somewhat resembling a saddle.

Look at it historically, and you'll see what English Heritage describes as "the most important public building of architectural ambition raised in London between the time of the Royal Festival Hall and the Hayward Gallery". If you look at it from the point of view of a roofer, however, you'll see a big problem. This spectacular roof, which earned the institute a grade II-listing, has leaked since the day it was built. In 1962 there simply wasn't the skill or knowledge to waterproof such a complex design.

Now, 40 damp years later, architect Avery Associates has had the task of fixing the roof once and for all. The practice was awarded the commission after winning the competition to masterplan the restoration and expansion of the building. But Avery's job wasn't just to find a way to plug the leaks. It had to make the roof comply with current Building Regulations, which meant installing insulation on a roof that was not designed to take any extra loading. Just to add a little spice to the challenge, Avery was further constrained by the building's listed status, which meant that any design change could be vetoed by EH.

Among metal roofing contractors, the Commonwealth Institute roof has reached mythical status. "I knew of the job because, over the years, I'd spoken to men who had been asked to repair the roof," remembers Ted Tibbs, contracts manager at metal roofing company NDM, which has won the contract to replace it. "These men came back with horror stories about leaks that were impossible to fix."

For 40 years, the institute had learned to live with its weird and wonderful roof. Where possible, rainwater has been directed through temporary guttering to the basement, where it often forms a two-inch deep pool.

To design out the flaws in the new roof, Avery needed to understand why the original leaked. The reasons were numerous. It was partly down to workmanship: in some cases, copper seams weren't bent properly and flashing did not overlap. The design of the seam patterns also caused problems: the cross welts – where the head and tail of two sheets of copper join – were often positioned on flat areas of the roof, which meant that standing water eventually penetrated the joins.

Cross welts were also threatened by water where inadequate sumps and gutters caused water to pond during heavy rainfall. The maintenance team at the institute had to install electric pumps on the roof to keep gutters and sumps free of water. Wind suction had also lifted and loosened copper strips – for years, the stop-gap solution was to hang weights from them.

To come up with satisfactory design and product solutions, Avery had to work in close collaboration with the material suppliers and industry associations. Avery was able to check the robustness of some of its specifications during pre-tendering interviews with roofing contractors.

The use of copper for the new roof was never in question, and Avery's brief was to install new copper strips and make it work second time round. "The copper is fine. It was the way it was used that was the problem," says Sandy Harrison, business development manager for architectural products at KME, the company chosen to supply the 4500 m2 of metal required. Avery made extensive use of KME's technical advisory service, and this advice was checked against information from the Copper Development Association. This gave Avery a stronger case when it approached EH about potential changes. "By discussing technical issues with EH, it meant that it was warned of any dangers that were looming," says John Dawson, a partner at Avery.

One of the biggest changes to the roof's design was the change in the seam pattern. KME suggested that to reduce the number of vulnerable cross welts, 10 m long copper strips be used instead of the original 1.8 m lengths. Avery then mapped the constantly changing gradients of the roof and positioned the copper strips to ensure that there were no cross welts on flat sections. One consequence of using longer strips was that each would expand and contract by a greater amount, relative to the other strips. To control this expansion, the strips were secured onto the insulation with fixing clips at the top of gradients and movable clips at the bottom.

EH also agreed that KME could supply the more affordable mill-finished brown copper rather than pre-patinated green copper that would have resembled the copper it was replacing. Harrison says that after 10 years, the mill copper will oxidise, turn green and grow a protective white salt layer.

NDM won the roofing contract because it was the only contractor that was confident that it could lay the copper on a double curvature roof. This was largely because of Tibbs' experience tapering metal strips onto mosque minarets. The same principle, which Tibbs calls "orange peeling", applies on the institute roof. When laying copper strips in areas of double curvature, NDM widened every fifth or sixth strip halfway along its length by bending one of the seams by hand, rather than using a metal profiling machine. NDM also suggested that at the peaks of the roof, the copper trays be turned through 90°, to allow the rainwater to flow down along the strips rather than over the standing seams.

To bring the roof up to current thermal standards, insulation had to be added. Avery used Foamglas by Pittsburgh Corning as its insulation material because of its low weight and the fact it could be temporarily weatherproofed while the copper was being replaced. Originally, a different architect had considered using a built-up timber roof for the insulation, but the engineer, Buro Happold, said the load would have been too great. The original dead load was 36 kg/m2 and Buro Happold calculated that the maximum weight the roof could withstand was 48 kg/m2 – an increase of 12 kg/m2. Buro Happold was able to justify this additional load because E E of a change in the code that determines how snow loads are calculated.

The copper was attached to the Foamglas using steel plates. The copper is clipped directly to these plates, which are pushed straight into the Foamglas. Even with this lightweight system, Buro Happold calculated that the additional weight of the build-up was still 2 kg/m2 too much. To reduce the weight, the continuous steel plates were replaced by 600 mm long sections spaced 600 mm apart. The low load tolerance also restricted the number of people that could work on the roof simultaneously. Only one person could work in a 4 m2 area, and NDM had to check with Buro Happold before it placed any equipment on the roof.

The Foamglas solution also had to be adapted to cope with the gradients of the institute roof. Health and safety regulations prevented the use of hot bitumen on the steep sections, so the Foamglas had to be cold-bonded. This method hadn't been used on such a curvy roof, and extensive testing by the project team had to be carried out to ensure that it would work. In areas of the roof affected by wind suction, NDM used mechanical fittings as well as cold-bonding to hold the Foamglas in place.

To protect the roof after the copper had been pulled off and before the new layers had been installed, a 2 mm thick SBS torch-on membrane was used to provide instant weatherproofing to the insulation. Without this, an expensive temporary scaffolding shelter would have to have been erected over the roof.

The job took 24 weeks, the project finished on time and – at £900,000 – within budget. The new roof has been tested in one violent storm and no leaks were reported. One consequence of the watertight roof is that wooden flooring within the Commonwealth Institute is beginning to creak. Like a ship raised from the deep, the timber is not used to the dry conditions.

To ensure that water did not pond, the sumps where it collected were increased to hold about 1500 litres and covered with copper grills to prevent the build-up of debris. To increase the flow of water down the drains, NDM created vortexes on the copper outlets. In a test on one copper bath, 1370 litres of water successfully drained away in 45 seconds. Gutters were also increased in size from 200-300 mm to 1000 mm to increase the water’s flow. If there is a blockage, electronic flood indicators in the sumps alert the maintenance team. 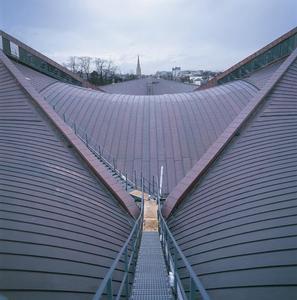 The design of the roof, by Robert Matthew, Johnson-Marshall and Partners (now RMJM), is based on the hyperbolic paraboloid. Its saddle shape derives from straight lines running between the sides of a rectangle folded across its diagonal. It has a double curvature, as structures based on this shape are intrinsically stronger than those with a single curvature, and can be built with a lighter fabric. For the institute roof a central hyperbolic paraboloid section was constructed using very light reinforced concrete, which ranges in thickness from 75 mm to 180 mm. The outer sections are formed by four incomplete paraboloids, which are made up of pre-stressed ribs in radial patterns spanning from the ridge to the edge beams. Woodwool slabs, 50 mm thick, provide a lightweight deck between the ribs. A 32 mm thick vermiculite screed was laid over the woodwool slabs and the reinforced concrete of the inner section to provide insulation and a level surface on which to lay the strips. Copper strips 1.8 m in length were fixed directly onto timber battens within the screed and were joined together using double-lock standing seams.

The height of safety

An abseiling company taught NDM’s workers how to use ropes attached to temporary hook eyes to stay safe. The roof became particularly vulnerable to loads when the copper was taken off, leaving only woodwool panels and thin reinforced concrete. For this part of the work, NDM used rubber stepladders, which moulded themselves to the shape of the roof. So the roof can be accessed safely in the future, a permanent latchway system was fixed by HCL Safety. The stainless steel end posts and anchor points supporting the cable had to be carefully positioned so as not to break the pre-tensioned steel that runs through the concrete ribs. Engineer Buro Happold restricted the depth HCL could drill into the ribs, and made it use a drill that would not cut through steel. Steel gantries were secured in the same way. These were powder coated to prevent water running off the metal and corroding the copper.